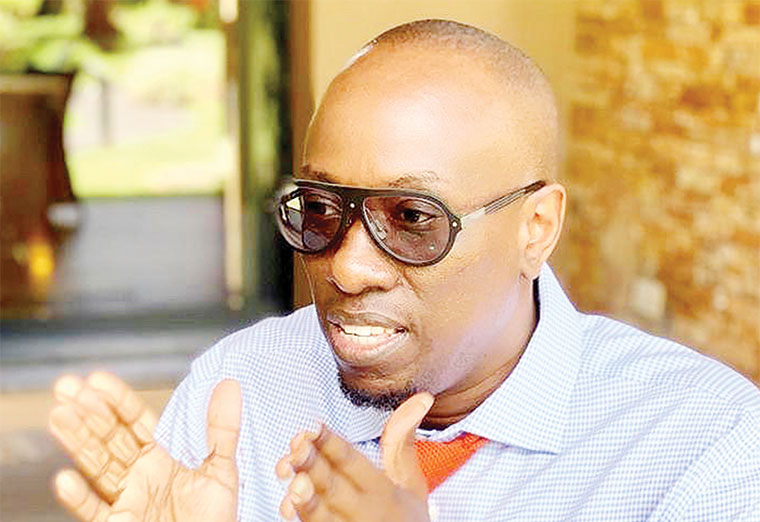 Haruna Nyanzi Bujirita is an addictionologist consultant in child and adolescent mental health based in the UK. Also a researcher, motivational speaker and part-time lecturer, Bujirita is applying his wealth of experience to transform the mental health sector. He told DERRICK KIYONGA about his grand plans to create the first specialised private mental health facility.

As Uganda joined the rest of the world to mark the World Mental Health Day today October 10, Bujirita was in the suburbs of Kampala to sensitise the community about mental health. This is just one of the many initiatives he is involved himself with as he seeks to humanise the scourge.

UK-based Bujirita is in the country to promote awareness of mental health, having spent more than 20 years abroad working in the field of mental health and addiction. I first met Bujirita two weeks ago at Serena hotel after he delivered a keynote address on the state of Uganda’s mental healthcare as well as the new Mental Health Act passed last year.

A pragmatist who believes there is need to do more than just speak about mental illness, he decried the limited awareness of mental health and the need to give it more priority given that around 6.8 million Ugandans suffer from mental-related illnesses.

Then last week, he commissioned the final phase of his specialised mental health facility in Kawempe, which he hopes will give a human face to the much-maligned mental illnesses.

“It feels good to be back in Uganda after more than 20 years abroad but I’m a bit disappointed with the state of mental health in the country. I hope to complete this facility by the end of the year,” he told The Observer. “The new Act is good and I’m hoping to use my expertise in the field to create a lasting impact here through provision of technical and services.”

Bujirita may not yet have the name recognition but his works speak volumes about his plans. Bujirita speaks with the authority of a veteran. He is also very optimistic, perhaps borne out of his experience in the UK.

“I’ve seen it all but it pains me when people don’t appreciate that mental illness – whether from depression or addiction – surrounds our daily lives,” he says. “I believe I can do something to help Jackie [Chandiru] even though I’ve failed to meet her…and just the other day, I read about a Makerere University student who committed suicide.  Mental health illnesses are part of our lives and we need to approach them with seriousness.”

Ten years ago, what started as a desperate effort to save a friend turned around Bujirita’s life in a way he never anticipated. Bujirita, who was going about his psychiatry work with adolescents in the UK, got an SOS call from Kampala for intervention.

“A friend who clearly presented with what I considered signs and symptoms of bi-polar disorder was in desperate need for treatment. His family had gone miles above seeking treatment having exhausted options in witchcraft,” he says.

“In an effort to help, I liaised and made contact with two leading experts in the country, Prof Segane Musisi and Dr David Basangwa [Director Butabika hospital] but was shocked to find the situation on ground was appalling; I later discovered my friend’s story was not an isolated one.”

Since then, Bujirita has frequently visited Uganda. In 2016, he kick-started efforts to build a mental health facility in Kawempe.

“There is so much Uganda can copy from the UK, especially when it comes to stigma and care for mental patients,” he says.

“I addressed the vice president about it and I’m glad he pledged to lend support to the initiative. I seek to provide for those in need - with easy and better access to quality psychiatric services. [Metro Health International] MHI has potential to transform the landscape of healthcare services in the country using an integrated model that combines both physical and mental health treatment - with key tenets including patient care, education and research.”

Indeed, a recent population study shows a high prevalence of patients with severe mental illness and poor access to services. There are less than 50 psychiatrists for 40 million people. Despite these alarming figures, it is striking how little awareness is in the field of mental health.

Through his experience, Bujirita wants to change the narrative through sensitization and philanthropy. And this is not mere rhetoric; Bujirita offers free consultation through his initiative called Metro Health International (MHI) and is in final stages of setting up a specialised mental illness facility in Kawempe.

“The demand for these specialist services is huge and yet the treatment options are limited with an overstretched psychiatric hospital [Butabika] serving the entire country. And of course, a host of other challenges including stigma attached to psychiatry and a lack of awareness that drives a considerable number of carers to witchcraft,” he says.

“It’s upon this background that I got the vision for MHI and this was shaped to purely improve the health and wellbeing of individuals struggling with mental health and substance misuse conditions. I also came to realise that training and research within this field were at huge deficit.”

Captivating as it is, one wonders why someone could leave his well-paying consultancy work in the UK to build a hospital in Uganda. “I have a number of colleagues here in Uganda and in the diaspora who passionately share concerns and need to do something. Doing nothing is not an option. The passion was to bring a range of experience and expertise in the field that could potential transform our healthcare landscape in the Uganda.”

Bujirita is also an advocate for the universal health insurance initiative by the ministry of Health.

“From the UK experience, establishing universal health insurance can improve access to healthcare, especially for the ordinary Ugandan,” he says. “This in turn stimulates private investment in healthcare infrastructure that would benefit the rest of the nation.  I just don’t understand why we have been slow in implementing these schemes that have been adapted by many countries in the region.”

Bujirita acknowledges that in Uganda today, mental, neurological and substance abuse disorders collectively form the leading causes of disability and premature deaths but psychiatric disorders such as depression and anxiety can be present in isolation.

“The reciprocal relationship between physical and psychiatric disorders is not well appreciated in Uganda given a health system that remains highly fragmented with limited delivery of mental health treatment largely kept separate, uncoordinated with hardly any linkage with the broader health care delivery system.”

Bujirita sees this as a complex issue. “Contrary to what most people think, addiction is only a symptom; it’s not the fundamental problem. The fundamental problem is trauma and pain. Addiction is usually an escape from pain,” he says. “All addictions come from emotional loss and exist to soothe the pain resulting from that loss and can manifest in any behaviour, not just drugs or gambling.”.

Moving on to substance abuse, Uganda is still globally ranked amongst the highest of hazardous drinkers if you consider alcohol consumption per capita with almost 90 per cent consuming unregulated and illegally sold alcohol.

To this, Bujirita says emerging evidence suggests an alarming rate at which young people are consuming illicit drugs such as cannabis, tobacco, shisha, kuber, mairungi (khat) - with the more affluent families accessing hard drugs such as cocaine and heroin.

“Unfortunately, most of the healthcare profession and the legal system do not understand addiction, resulting in disastrous, harmful treatment and criminal justice solutions as a consequence of a punitive approach to this epidemic,” he says. “Locking up addicts in jail often perpetuates the cycle of abuse and addiction.”

Bujirita adds that rates of mental illness, particularly depression, are between two to three times more common in those with long-term conditions, including coronary heart disease, cancer or diabetes.

“Let me give you an example; clinical data suggests that majority of HIV/Aids patients would suffer from a form of anxiety or depressive disorder.  What tends to happen is if these psychiatric disorders are not effectively treated, they can impair self-care and adherence to the medical treatment, are more likely to misuse substances and less likely to attend medical appointment; therefore affecting overall outcomes,” he says. “Similar observations have been made of patients suffering from other chronic conditions such as diabetes, heart disease, cancers.”

“Historically, a considerable void in knowledge of the plant resulted in stigmatisation and criminalisation of the use of this drug. And not surprisingly, the research over the decades focused more on harm rather the potential benefits it brings.  This imbalance partly distorted the true picture and it was until recently that evidence has begun emerging of potential benefits it brings especially in treatment of some disorders,” he says.

“There’s loud chorus of patients whose symptoms have been improved on cannabis for treatment of seizures, pain relief but likewise its misuse has showed terrible consequences such as addiction and mental illness with young people more susceptible to harm as compared to adults.  So, in my review, more research is still needed on this to ascertain more potential benefits.”

“Rising demand for services, constrained funding and a multitude of workforce challenges require us to think differently about how we deliver healthcare to meet people’s needs and expectations.  All sorts of technology and information technology (IT), in particular, are now increasingly been seen as an integral part of solution to many of the challenges facing healthcare- especially in enabling more accessible and effective integration of care,” he says.

“It’s also seen as safer, more efficient and cost effective.  In particular the development of smartphone technology offers us unprecedented opportunity to provide immediate information and support to people wherever and whenever they need it.  For instance, if you look at the global scale, is it strange that 50 per cent of the world’s population doesn’t have access to healthcare and yet 80% have access to some kind of mobile phone?  Here in Uganda, there are about 24.4 million mobile users, 3.5 to 4 million of them using smart mobile phones with about 2m social media users.”

Bujirita also says that addictions developed from recreational use of substances and prescription medications which shows that these presentations or conditions are usually linked to childhood experiences – with trauma in particular.

“Children with traumatic childhood experiences such as neglect, physical and sexual abuse, and family dysfunction are more likely to engage in substance abuse as a coping strategy. We know that the majority of chronically hard-core substance-dependent adults lived, as infants and children, under conditions of severe adversity.  Their predisposition to addiction was programmed in their early years. So, until we deal with that trauma, we cannot heal the addiction.  These experiences are also associated with a range of physical and mental health disorders,” he says.

“Unfortunately, most treatments including disease-modifying drugs have been unsuccessful in reversing the damage or symptoms.”

Meanwhile, he also has a keen interest in child and adolescent mental health as part of presentation and early intervention strategies simply because most psychiatric disorder usually begins at an early age, teenage mostly.

At the moment, Bujirita runs a social media campaign to create awareness and fight stigma and discrimination associated with many of these conditions. “Stigma is a huge barrier to accessing and treatment of mental health and related disorders.  We have been fortunate that a number of prominent persons and volunteers have joined us in the campaign – and the message is slowly circulating.”

“For me those statistics indicate an opportunity to deliver affordable and cost-effective healthcare to masses using technology to aid us override / by-pass shortage of skilled personnel. I’m currently in talks with an American IT company that is launching an app. I always advocate for people to be compassionate about sufferers of mental health and substance users.  Shame and stigma can’t coexist with compassion.”

The rest is subjective based on interpretations and perceptions. What is consider a normal behaviour in one society may look abnormal in others.
Report to administrator