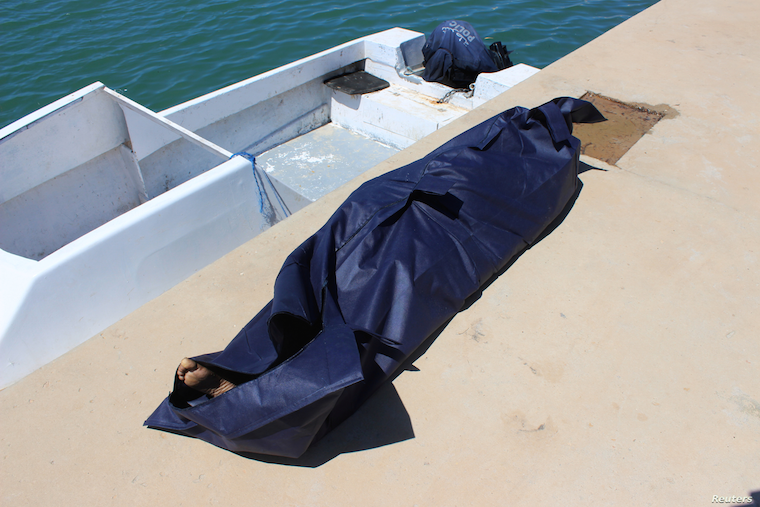 The International Organization for Migration (IOM) reports fatalities from a shipwreck Monday off the coast of the Italian island of Lampedusa has pushed the migrant death toll on the Mediterranean Sea this year to 1071.

The boat, which capsized seven miles from the coast of Lampedusa, reportedly departed from Tunisia with between 50 and 55 people aboard. Some of the 22 survivors of the accident testified passengers included 15 Tunisians, as well as West African migrants.

Authorities say the Italian Coast Guard has recovered 13 bodies, all of them women, who came from Ivory Coast, Burkina Faso and Guinea. International Organization for Migration spokesman Joel Millman says 17 migrants remain missing, including more women and at least two children. He says the missing are believed to be nationals of Ivory Coast, Cameroon, Guinea Conakry and Tunisia.

“IOM’s Missing Migrants Project reported Monday that these deaths bring to 15,750 the total number of dead, on this particular central Mediterranean route since 1 January 2014. This is approximately 10 times the total lost on the Mediterranean’s eastern corridor linking the Middle East to Greece, and almost the same multiple of all deaths on the western route linking North Africa to Spain,” Millman said.

Weather conditions reportedly were bad when the overloaded vessel, an unseaworthy wooden boat, set sail from Tunisia. U.N. refugee agency spokesman Charlie Yaxley said this tragic loss of life was predictable. He said, once again, people anxious to reach Europe put their lives in the hands of smugglers and traffickers, whose only interest is to make money.

“We cannot continue to allow these criminals to act with impunity and to allow them to prey on people’s misery and desperation by taking peoples’ services under these false promises,” he said.

Yaxley said the UNHCR is calling for a redoubling of efforts to identify those individuals responsible for this carnage and hold them accountable for their actions.

0 #1 Akot 2019-10-10 19:22
International Organization for Migration is a criminal body that lives on miseries of those running away from shitholes, leaving their countries to dictators, useless rulers!

It's amaizing; organisations that claim to be humane are the ones drawing people to death, imposisng them on well governed or countries not at war like Uganda, while useless rulers are left in peace to just go on!

How can this body claim it's serving human interest when it ignores the inhuman tribalistic system in Uganda, the means Museveni uses to stay in power & since 1986 & will rule for life?

Ah! Uganda is full of tribalists migrants at armed war but the entire world is asked to finance this kind of organisation that lives on people's miseries!

Uganda is officially, internationally, land for migrants taken in by migrant Museveni & so called humane bodies, without powerless Ugandans' permission!
Report to administrator
0 #2 Akot 2019-10-10 19:49
Which African... ruler says a word about these meaningless deaths?

Africans... who die crossing Med. are replaced by other family members who take the journey immediately, to give families hope of a future!

Continued migration has turned European sociopolitics upside down, with no clear answers to the cause of migration!

Migrants say "it's better to die crossing Med. than remain in our countries with no hope, no future"!

Yet, freezing finances for UNHCR & all these Organisations encouraging migration, will be the ONLY HUMANE answer & people will finally look at the reason their countries are shithomes, instead of being livable homes!

Can we imagine if money wasted by UNHCR & all these fake humane Organisations was used for; Education, Healthcare, Housing...in these shitoles ruled by heartless uncultured demons?...
Report to administrator
0 #3 Akot 2019-10-10 19:59
...D. Trump sees that +70 years wars USA went in gave no answers & never will! Why does Europe critisizing USA president for this HUMANE decision?

Why is Europe not aware it's their involvement in wars & not in helping people bring good governance, that is needed?

These endless wars yonder is the reason migration to Europe/USA will not end, especially as Americans & Europeans are part of/involved in the wars!

Just as the more money USA/EU give useless rulers who don't serve their people, the more these will migrate to where the money helping keep their demon rules come from!

Tribalistically divided & ruled Uganda with Ugandans having no say, not served, ignored by UNHCR & so called humane organisations, is considred peaceful home for refugees, right?...
Report to administrator
0 #4 Akot 2019-10-10 20:04
...Ugandans do know that migrants in the country, UNHCR & these fake humane organisations are not concerned about how they live or ruled by demon Museveni, right?

So, why has UNHCR & all these Organisations helping Museveni own Uganda & make it home for Migrants, even knowing Ugandans are NOTHING in the country formed by their tribal lands?

Akot calls Ugandans to UNITY so that they throw Museveni out & go for the kind of governance they want, but which of these so called human organisations has done so, yet bring in & finance migrants in the country?

But of course, Ugandans being NOTHING & without say in the zone makes it legitimate for UNHCR & these fake humane organisations to fill the country with tribalists migrants at war with themselves!

As things are, where will UNHCR/fake humane bodies resettle Ugandans as refugees they will have to take care of & be proud of?
Report to administrator