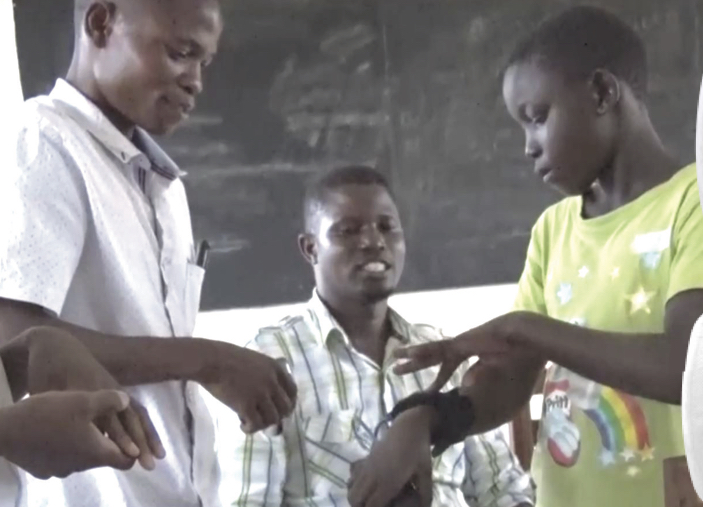 A demonstration of how the Safe Bangle works

The new tide of insecurity has triggered a wave of worry in the country and in equal measure, innovations in deterring security systems.

Young innovators have invented devices that can detect house break-ins and send out alarms or pinpoint locations of kidnap victims. The Safe Bangle, fitted with a GPS locator can be tagged on an individual. In case of a kidnap, he or she can be easily located while the Yunga device is tagged to a string of households in the same neighbourhood. It can easily send off an alarm in case of a break-in.

According to Anatoli Kirigwajjo, the innovator of the Yunga Technology, households are connected and tagged to a nearby police station. In case of a break-in, an alarm goes off and police responds quickly.

Yunga technology works under the tagline ‘My Neighbour My Help’. Neighbours can use it to protect each other instead of relying on hired security personnel.

“As a group, we were alarmed by the high incidences of house break-ins both in towns and rural areas and decided to come up with a solution that would reduce such cases,” Kirigwajjo added.

This system costs Shs 150,000 to connect to a home and so far, he says, they have already got over 1,000 requests. He says however, they don’t have the capital to meet the demand. This group of innovators gained the spotlight in 2018 when they won the Innovative Justice Challenge in Kampala.

The other group of young innovators who have developed the safe bangle say they were moved by the high incidences of sexual and physical violence in the country especially against women and girls. Ambrose Kamya, the Safe Bangle team leader, says the device can locate a kidnap victim.

A small device, which houses the brain of the unit, is hidden behind an accessory such as a necklace or a bracelet which cannot be easily identified by a third party. He says his team was inspired to develop the safe bangle by the rampant assault on women, girls and sometimes men and boys.

The other members of the group are Dorothy Ankunda, Berth Plant, Messach Lumisa and Saul Kabali. The idea was developed at the height of kidnaps and killings of women in Nansana and Entebbe municipalities.

“We wanted to create a quick mechanism for potential victims of sexual or physical violence that provides a faster and more effective response at the point of attack. That’s why we decided to make a safe bangle,” Kamya added.

Dorothy Ankunda described the bangle as a smart, watch-like wearable device designed with hidden attributes and a panic button. When activated, the panic button sends text messages to registered contact persons who can quickly come to the victim’s rescue.

She said it is detachable and in different forms like bangles, belts, necklaces and anklets using the embedded GPS locator which makes it easy to trace the victim. The GPS locator helps to identify the exact location of the person in need of help.

“When a person buys this bangle, we get their next of kin contacts that are incorporated into our database and once one is attacked, they can press the button that sends notifications to the numbers of his/her next of kin that the person needs immediate help,” Ankunda added.

To make it a success, the group gets support from UN Women, Resilient Africa Network, Makerere University School of Public Health, United Social Ventures and Innovex. The product is expected to be on the market by December 2019. However, Ankunda says they are looking for development partners or funders to make it cheaper and affordable for majority of people in need.

Moreover, we pay tax so that the government with its flawed security systems (Army, Police, LDUs and self appointed individuals) can safely guard our freedom.

We must address the social issue why there is a such a huge rise of all manner of crimes in this country!
Report to administrator