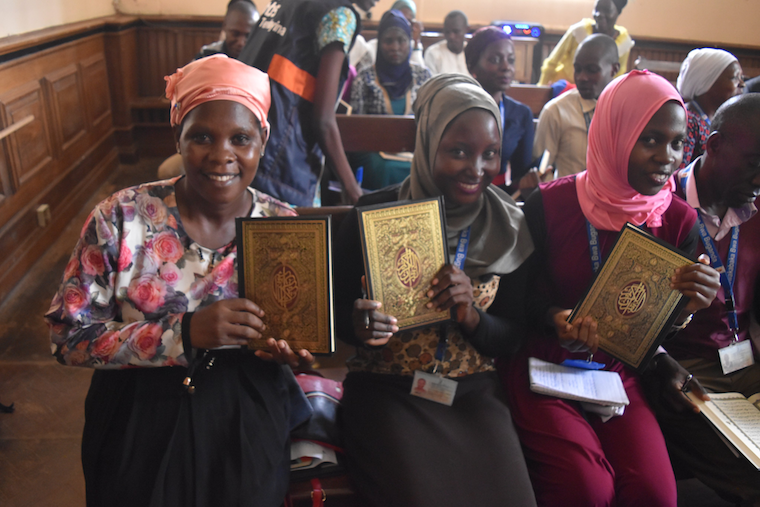 Some of the participants with their Qur’an

The Muslim community in Uganda has received an assortment of items donated by the Nnabagereka of Buganda, Sylvia Nagginda.

The donation comes on the coat-tails of Nnabagereka’s February 2019 visit to Dubai in the United Arab Emirates during which she lobbied the royal family to donate to the Kabaka’s subjects. Nagginda was in Dubai to officiate at festivities to mark one year since the creation of Kabaka’s county in Dubai.

She was welcomed by Kabaka’s chief in Dubai, Sheikh Abasi Nsubuga who led her to the royal family. On Thursday last week, the first deputy Katikkiro of Buganda, Hajji Dr Twaha Kaawaase, officially handed over 10 rolls of big prayer mats and more than 1,000 copies of the Qur’ans sent from Dubai to Muslim leaders.

Speaking at Bulange in Mengo, Kaawaase cautioned the leaders to ensure transparency while distributing the items to the rightful beneficiaries.

He applauded Nagginda for lobbying for Muslims, an indication that Buganda is open for all religions. At the event, the office of the Supreme Mufti that received the items was represented by Sheikh Hamid Kateregga, the secretary for religious affairs and Sheikh Ibrahim Ntanda, the Kampala district supreme Kadhi.

“We are grateful to all those who ensured that we receive the items in Uganda. A Qur’an is a holy book that many cannot afford to buy while for prayer mats; every time one prays on a donated material, Allah rewards both the person praying and the donor,” Kateregga said.

More should be done by these leaders concerning the environment. There is still an opportunity for the state of Buganda and the state of Emirates to rejuvenate forests in the deserts of Arabia as well as recovering the many forests which have disappeared in the country of Buganda.

Emirates Airways should be leaving some cargo space to transport forestry seedlings to build up tropical forestry reserves in these oil rich United States!
Report to administrator
+1 #2 rubangakene 2019-10-09 22:27
Shall we eat the Korans and mats?

The Arab Muslims always give alms in the form of foodstuff to the needy; whatever happened to the dates.

They must have given us some "crumbs" at least or is it on the way coming by ship? This seems to me a case of; "Let them eat cakes!"
Report to administrator
0 #3 kabayekka 2019-10-10 02:01
What about an international trade with the Emirates in sand for the beaches of Lake Nalubaale and forestry seedlings and black loam soil for the building up of forests in the Arabia desert.
Report to administrator