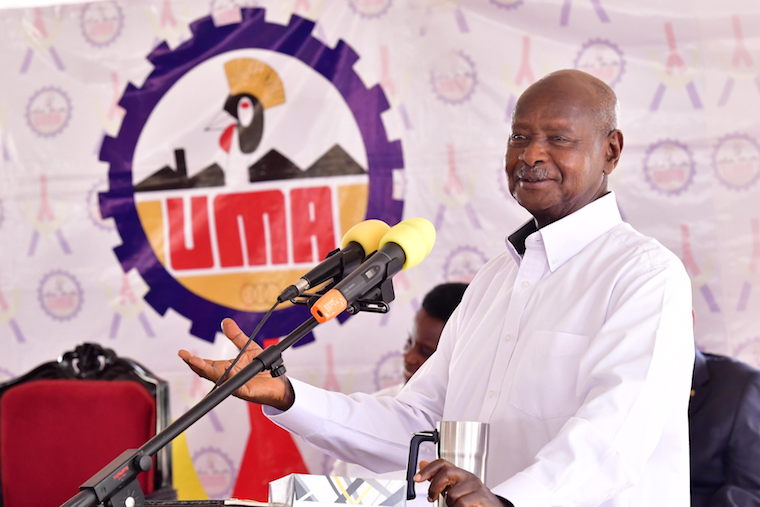 President Yoweri Kaguta Museveni has blasted the Uganda Revenue Authority (URA) leadership for not being forthcoming on the needs of the manufacturers.

Museveni, who officially opened the Uganda Manufacturers’ Association (UMA) exhibition show at Lugogo on Monday, first engaged UMA board in a closed-door meeting. The board narrated to him the challenges they face, among which is being an unresponsive tax body.

Museveni said that manufacturers told him that URA takes long to refund their money paid in form of Value Added Tax (VAT). This means that they find problems with money to invest back because it is being held by URA. He said URA was imposing unnecessary delays to refund this money, making companies fall into challenges with liquidity.

Museveni cited Paramount Dairies, a company that collapsed recently. He said it was because URA had failed it with delays in refunding its money.

“What is the problem for not paying them back,” said Museveni. “This is an administrative issue and we will resolve it.”

URA charges 18% VAT on manufacturers at every stage of product manufacturing. However, this is supposed to be refunded when the product is exported. Traders say URA delays to refund their money. The tax body writes on its website that unnecessary delay to refund VAT should attract a 2% monthly fine on its part.

Companies that export goods manufactured in Uganda are entitled to refund of this tax. The manufacturers also told Museveni that URA was delaying audits on certain manufacturers and later come up with fines claiming failure to comply with tax demands.

Museveni said this was “unacceptable.”

This is not the first time Museveni is showing his displeasure with URA. Early this year while opening URA’s new tower, Museveni told off the tax body for not doing enough to stop the smuggling of goods into the country without paying taxes.

Museveni said then that URA “didn’t merit to be called an authority”.

The UMA 27th exhibition has attracted at least 500 companies. It has attracted exhibitors from at least 20 countries, including Nigeria, Thailand, Kenya, Ghana, South Africa and Sudan. George Fakuwalo from Ghana, who was exhibiting sandals, said the exhibition was slow and they didn’t receive as many customers as they had hoped.

Awero Obemi, a Nigerian who came to sale blenders that are imported from China, said this year’s exhibition was not as good as last year’s in terms of sales. He said people were few and many of the showgoers are just school children.

For some exhibitors, however, it was good because of the positive reaction from the public over their goods. Eng Dan Kilimani, the director of Alakaituk Enterprises Ltd, who was exhibiting a ploughing tractor, said Ugandans expressed positivity over it.

He said this is because it is modified to meet Ugandan conditions including clay-like soils, and the fact that it is multipurpose and therefore one can fix a weeding machine on the tractor and use it or an irrigation machine and use it.

Dr Sarah Mubiru, the founder of Aroma Honey Toffee, who make sweets made out of the honey bee, said she was happy with the turn up at the exhibition. She said people bought sweets, which were going for Shs 1000 each, and that this was an indicator that people would welcome them on the market.

Aroma Toffee is a new company and she says she hopes to start distributing in retail outlets soon. On the whole, the UMA exhibition was thin on innovation, with manufacturers hardly showcasing groundbreaking makes.

The show looked more like an ordinary market where every trader books a stall to sell their merchandise. Known manufacturers like Madhvani, the Malwana group, and Steel and Tube also showcased their known products.

Barbara Mulwana, the chairperson of UMA, said the that annual event helps them develop the smaller manufacturers to build synergies and partnerships.

They taxed many of us out of import business and one wonders how the economy benefits when we keep our money away!

Importers are treated as criminals of some sort by URA. Many times importers are left to be fleeced by clearing agents as a result of URA’s smugness!

URA must start listening to the business people and bin the current haughtiness. Modern business is about partnering with all stakeholders.

Having said that, all what is going on Uganda today is a direct result of Museveni’s patronage. When jobs are not given to the most suitable but those from the “right community”, with no accountability it’s just inevitable, things have to fall apart!
Museveni MUST go, for Uganda to function once again.
Report to administrator
+2 #2 Lysol 2019-10-08 20:37
Always playing the blame games. M7 what do expect when you surround yourself with your fellow corrupt cronies or relatives?

They will always not take you seriously. They are their to rob Uganda and wait you out like your dead frenemy, one Mugabe and many others before that. Time is running up. The buck stops with you.
Report to administrator
0 #3 Stephen 2019-10-09 11:01
"Barbara Mulwana, the chairperson of UMA, said the that annual event ".Editing Error.
However URA is doing a better job compared to 1986.

Manufacturers should be more creative, innovative and inventive. Other wise that trade show will always remain like a usual market place with no ground breaking broduct lines for the dynamic needs of this age.
Report to administrator