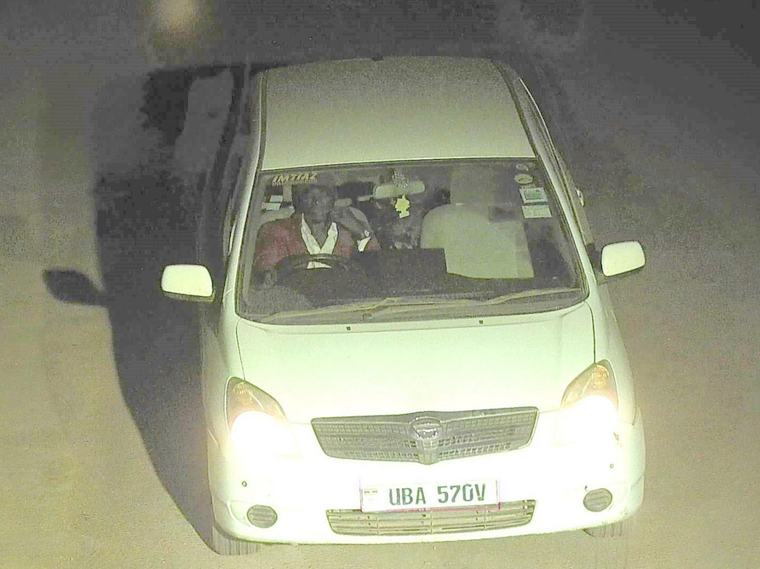 One of the suspects captured by CCTV driving Nagirinya's car

A boda boda rider Sharif Mpanga alias Shafic who allegedly ferried the suspected killers of Maria Nagirinya to her gate entrance has been arrested.

Police spokesperson, Fred Enanga said on Monday that Mpanga was arrested over the weekend by a combined team of Chieftaincy of Military Intelligence (CMI) and police.

Nagirinya, a social worker and her part-time driver, Ronald Kitayimbwa, were kidnapped outside her home gate in Lungujja, Rubaga Division in Kampala on August 28 at around 11:40 pm. The duo was kidnaped in Nagirinya's Spacio car UBA 570V. They were found killed and dumped in Mukono district on August 30.

According to police, Closed Circuit Television (CCTV) cameras captured the kidnappers driving the deceased’s vehicle at around midnight as they were being guided by a boda boda rider who was later identified as Mpanga.

CMI, police launched a manhunt for the suspects and four people have been arrested and charged in court after recording an extrajudicial statement in admission to committing the crime.

The quartet revealed that they had got hired to execute the kidnap and murder by a one Sadat Kateregga alias Baros while they were still locked up in Luzira prison. They added that they surveyed Nagirinya’s home moving on Mpanga’s motorcycle.

This now brings the number of suspects accused of being involved in the crime to six. Police said this was the team that orchestrated the entire murder plot where Kasolo, Kisekka, Muwonge and Lubega were each paid Shs 130,000.

CCTV footage allegedly captured Mpanga dropping Kasolo and Kisekka near Nagirinya’s home and waited for the victim to arrive. Mpanga waited to evacuate the killers in case the mission had failed.

After kidnapping Nagirinya and Kitayimbwa, Mpanga rode ahead of the suspects directing them to the safe routes to take. Enanga said he also went to Mukono and surveyed the area where the victims' bodies were dumped.

Kateregga, according to police is yet to reveal who 'contracted' him to carry out the murder. Though Kasolo who hired his other colleagues, says Kateregga hired him for the heinous crime, when he was about to be released from Luzira prison in May, he does not know whose job it was.

Security now believe Kateregga who is being handled at Special Investigations Division (SID) in Kireka will perhaps reveal who tasked him to hire Nagirinya’s killers. Nevertheless, Kateregga has so far told police that they killed Nagirinya because she often moved with huge sums of money of over Shs 50 million on her.