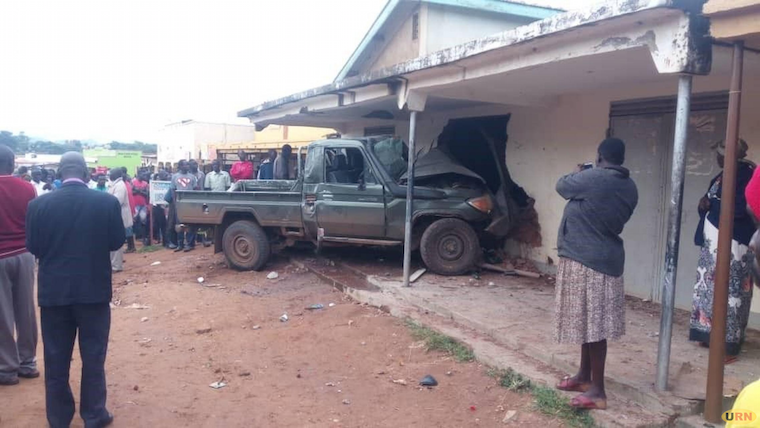 The soldiers, whose particulars couldn’t immediately be established, were killed this morning while enroute to arrest one of their own, Pt. Jimmy Masaaba in Uzake village in Morungole sub county in Kaabong district.

Masaaba is wanted for shooting Joseph Nyerere, a foreman at a Chinese Construction Camp, following a disagreement. He was sighted in Uzake village, according to one of the residents, prompting the brigade leadership to send a team of officers for his arrest.

But as the army car registration number, DO3DF108 sped off for the mission, it was obstructed by goats on the road causing the driver to lose control.

The vehicle then rammed into a beer depot, killing four soldiers on the spot and injuring three others. Maj Telesphor Turyamumanya, the 3rd Division spokesman confirmed the accident, saying it occurred around 7:00 am in Kaabong Central Ward in Kaabong Town Council.

Ugandans are drunkards/alcoholics because many are depressed and living under an oppressive corrupt regime.

But it seems they are clueless as to how to bring about change. Many are easily compromised and bullied/intimidated by the regime.
Report to administrator
0 #2 WADADA roger 2019-10-07 22:11
I do not know whether to say sorry or not, surely, why would any one drive at such a break neck speed to arrest somebody as if the police would not do it.

Besides, if there were goats on the road, the driver should have slowed down, what they were running after was not an emergency to warrant driving recklessly
Report to administrator
-1 #3 Wainanchi 2019-10-08 03:43
Condolences to the Army!

However, discipline and supervison is of imprtance and essence.

Often soldiers use guns to apply justice.. All indisciplinend should be Court Marchalled and released from the Army.

All vehicles should always be technically tested and inspected and fit for the road.
Report to administrator
0 #5 Wainanchi 2019-10-08 21:06
I got in both cases two minuses.

Meaning I as right!Therefore it is obvious hatred for our Army! And we have our Army to protect us.

If there is no Army we would be given to the dogs! Remember Libya? Remember Syria?Remember Tito Yugoslavia? In these and other cases foreigners sabotaged and terrorized armed forces to disable them to defend their countries.

Libya was militarily weak, Syria was strong but attacked from all sides. If Russia did not help it would be destroyed.

Yugoslavia was sabotaged in many ways internally and finished in bloody internal civil war since Army was impotent and sabotaged.

In case of Turkey, Army was strong and Turkey was defended.In case of Afghanistan, there were no Army,In case of Iraq , Army was strong but not powerful to defend its against the Coalition which used faked reasons and mighty power to destroy and take its oil. You want another rock???
Report to administrator
0 #6 Lakwena 2019-10-10 10:48
Because of the power they wield in the name of the power that be; the high speed at which most UPDF and/or President's Office vehicles are driven, is bordering an "obsession" mental health problem.

E.g. for apparent no serious reasons or urgency,
everytime, they want other motorists out of their way.

Condolences to the Army!

However, discipline and supervison is of imprtance and essence.

Often soldiers use guns to apply justice.. All indisciplinend should be Court Marchalled and released from the Army.

That is why I love and hate you at the same time Wainainchi.