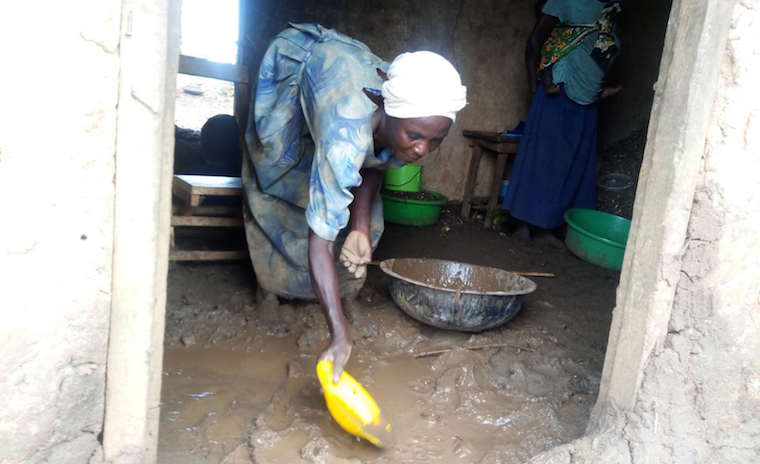 One of the affected victims

According to the Bulambuli district environment department, the floods, which occurred on Sunday, immensely hit Sisyi, Simu, Bulaago, Bukaalu, Muyembe, and Nabongo sub counties. The floods also destroyed gardens, livestock has been killed, roads and bridges have been cut off.

According to residents, the floods followed heavy rains that pounded the area for more than three days. Residents say some of the water flows from the stone quarrying sites belonging to Kampala and Tororo cement factories and ditches that were left open after the excavation of murram.

Some of the ditches that were used as far as 1998 have now turned into man-made lakes covering over 10 acres of land. Residents claim these have made the soils soft making the area susceptible to flooding more especially when it rains.

Robert Mauka Wanzusi, the Nabongo sub county LC III chairperson, says water from the stone quarries floods the lower parts of the district. Nathan Weliche, LC II chairperson Bunangaka parish, whose house has also been affected, says most of the flood victims are currently sleeping at Bunangaka primary school while others have sought refuge in their neighbor’s homes.

He says the affected people have nothing to eat and calls on the government to intervene to provide them relief food and mosquito nets. Fred Simiti, a resident of Bunangaka parish, says for 4 years now they have been facing the same problem and that they have severally appealed to the authorities to fill up the open ditches in vain.

Simiti says his 10 children survived drowning water when he punched holes in the house to create channels for water to flow outside. Topista Kituyi, a mother of 8 children, says they spend sleepless nights since all their beddings were washed away by the water.

Moses Wakonelo, the Bunangaka parish councilor, says the sub county leadership has written to the district and area members of parliament notifying them about the need to open trenches to improve water flow. Innocent Wandabwa, the Bulambuli district environment officer, blames the flooding on poor farming methods in the district.

He explains that people have cultivated up to the river banks, which makes it hard for them to hold water. He also concurs with residents that the ditches left behind by stone quarries are part of the problem, saying they have failed to control the water that flows from the quarries.

Such floods are normal in Bugisu and they happen every year.
Report to administrator
0 #2 rubangakene 2019-10-07 20:19
Without the flood, we wouldn't have seen this picture of poverty living.

Just imagine that actually after thirty years of grand-standing by our President, people still live in squalor like this; despicable if you ask me.

These are the same people who vote the NRM year in and year out.
Report to administrator