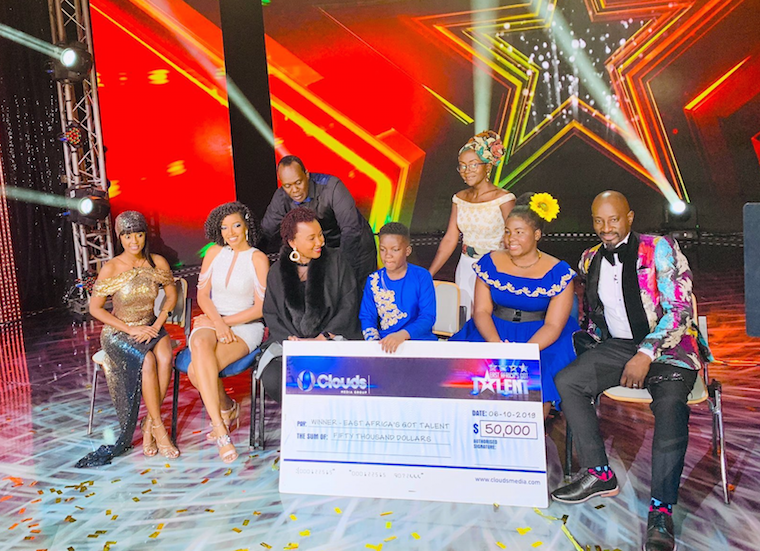 The Mutesasira siblings (in blue) deservedly won the EAGT finale

At this moment, it is an assured gold medal or prize money for any Ugandan who gets into the final - no matter the age, stage or challenge.

The talented Mutesasira siblings are children to Pastor Stephen Mutesasira and wife Julie Mutesasira, who, herself ruled Uganda’s gospel music scene for some years from 2005. Uganda, which had three of the six finalists, was simply too good for the rest of the acts from Rwanda, Kenya and Tanzania from start to finish.

Even with Ugandans' non-voting culture for our own, the rest of East Africa recognized true talent and deservedly voted the Mutesasira siblings as the inaugural winners of East Africa's Got Talent show.

When all the four judges; Vanessa Mdee, Jeff Koinange and Gaetano Kagwa, Makeda Mahadeo gave the sensational siblings a standing ovation, you almost realized destiny was beckoning for the duo.

Vanessa told the siblings way back at the start of the show that "something incredible is about to happen" and that it was going to start at East Africa’s Got Talent. The audience screams when they called out their names at the start of the finale show, also pointed towards where the prize money might be going. In the end, it wasn't a surprise to anyone.

So assured of their talent and capabilities, the Mutesasira siblings challenged themselves even further when they went for Whitney Houston ft Mariah Carey’s When You Believe song at the finale. It takes self-belief to even attempt; let alone tweak effortlessly and flawlessly this difficult song to such perfection as the siblings did. Not that Kenya’s young songbird Jannell Tamara and Spellcast who harmoniously manage to choreograph over 40 voices and bodies were bad, but the Mutesasira siblings were simply the best.

Jehovah Shalom Acappella perhaps became overly confident given the global praises they have been receiving ever since they were unveiled to the world. They have been around the Ugandan scene for some time, but never has the world ever appreciated their talent until East Africa's Got Talent.

Their finale performance was predictably not among the top three. Dance Network Alliance (DNA) just got better and better with their comedic dance and they can return home with their heads held high. Rwandan cultural troupe Intayoberana was voted second best while Kenya's Janelle Tamara was the third-best act.

It is not true that Ugandans have a non-voting culture for our own, Ugandans simply dont wish any of their own success.
Report to administrator