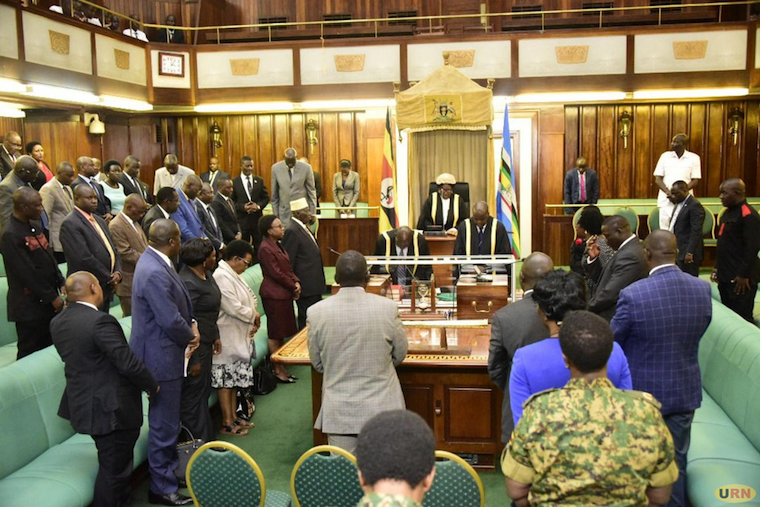 A section of members of parliament have criticized the government for failing to implement the merger of government departments and agencies.

During the plenary session on Thursday presided over by speaker of parliament Rebecca Kadaga, the MPs argued that the slow pace of implementing the exercise has left donors, staff and the public anxious.

A year ago, government announced plans to merge or return departments and agencies to their parent ministries. The plan, approved in September 2018 during a cabinet meeting chaired by President Yoweri Museveni was part of a reorganization aimed at realigning functions of agencies and preventing duplication of roles and waste of public funds.

Kiboga East MP Keefa Kiwanuka raised a matter of national importance questioning the progress on the matter. Kiwanuka said that the minister of Information, Communication and Technology (ICT) Frank Tumwebaze said the merger would see Uganda save about Shs 1 trillion in salary and wages, a move that was welcomed by the public as a way of avoiding duplication and cutting down on waste.

He demanded that government briefs parliament about the timeline for the planned merger. Kadaga tasked the first deputy prime minister, Moses Ali to give a briefing, saying that the matter continues to cause anxiety and pointed out that some of the proposals for mergers were strange.

In response, Ali acknowledged that although the government had committed to carry out the mergers, there were some legal complications detected along the way which saw the executive seek the advice of the attorney general on the matter.

Kadaga rejected Gen Ali’s presentation, wondering how all the conflicting Acts will be annulled yet the same executive has failed to process some of the Bills they promise. She tasked the prime minister to update the country on how far the Executive has gone with mergers.

See, USA law makers want D. Trump impeaced because the president has improved economy, given hope to the young, thus surely will be reelected for second final 4 year term!

Americans shouldn't be blinded by fake opposition with no alternative programmes for the people, yet wants to end the socioeconomic gains D. Trump so improved & is making America great, envied by even Europe!

Mps are not even aware that as long as the tribalistic system stands, they don't represents the people as this doesn't exist!

Tribalistically divided & ruled Ugandans MUST not go for another fake parliamentary election to legalise Museveni's life time rule!
Report to administrator
+1 #2 WADADA roger 2019-10-04 16:17
I dont see the merger happening any time soon, may be after change of Government. Just flip through the agencies that are due for merger, 98% of them are run by relatives of the first family, spouses, friends and children of their friends.

Do you want them to become unemployed?. May be somebody is looking for position in the mainstream where they will have to displace some not so important fellows and replace them with their own.
Report to administrator
+1 #3 Amooti mugi 2019-10-04 17:25
"the matter needed thorough study before implementation..."
Meaning those who worked on the proposal, those who debated it, and even signed approving it-wasted valuable time, energy and resources????? Just asking.
Report to administrator
0 #4 rubangakene 2019-10-04 18:24
These MPs are addressing issues that are not really important. What is the use of saving one trillion only for the money to be used for their travel abroad.

Instead these guys should look seriously what really affect the wanainchi; for example, why a kilo of sugar costs more in Mbarara than in Kampala, why do upcountry peasants pay more for building materials like cement, etc., etc,. electricity and many other things and yet pay same taxes.

The government should set up regional distribution centres for essential goods and establish strict price controls for such goods. If Tanzania can do it, so can we!
Report to administrator
0 #5 Lysol 2019-10-04 20:06
First the corrupt regime should get rid of the many useless so-called presidential advisers.

Then get rid of the useless copy-cats/kitchen cabinet members and that alcoholic corrupt half-brother(the keeper) one Salim S and that wicked-smile corrupt in-law Sam Kutesa In fact all of them should go.

They are already rotten. Once the meat is rotten it should not be eaten. Including the milk they drink for a living. Millet food is not healthy either for breakfast..
Report to administrator
0 #6 kabayekka 2019-10-04 22:22
Such an administrative move will depict the NRM government as onward soldiers marching backwards.

And it is unprecedented in the history of African politics for African governments to say sorry to their most devoted voters.
Report to administrator
0 #7 Akot 2019-10-04 22:35
Why would Ugandans vote in mps again & continue legalising this abuse of office since 1986?

Even Irakis have come out on streets to say NO to abuse of power, corruption, abuse of the people... by their so called leaders who have proved no better than Saddam Hussein! Those in power have already sent more Irakis in exile than S. Hussein did!

Ugandans MUST not wait for Museveni to die in office as this will be more destructive to them than what's going on under the dictator!
Report to administrator
0 #8 Ennu 2019-10-06 23:44
[quote name="Akot"]Mps can only become useful to Ugandans if they IMPEACH Museveni as for once they'll be working for electorate!

See, USA law makers want D. Trump impeaced because the president has improved economy, given hope to the young, thus surely will be reelected for second final 4 year term!

Americans shouldn't be blinded by fake opposition with no alternative programmes for the people, yet wants to end the socioeconomic gains D. Trump so improved & is making America great, envied by even Europe!

Now u Akot, what does Trump and US politics have to do with this issue? Sometimes I have no idea what u are talking about. U need to start talking less and just respond to the subject matter, if u don’t have anything to contribute, it’s ok to just keep quite
Report to administrator
0 #9 Lakwena 2019-10-07 16:20
In other words, it will not happen. Just like there is no will to fight corruption, 99% of the statutory authorities are actually a veiled form of corruption entities where the regime funnel off taxpayers money for political agenda.

That is how the their Executive Director get a disproportionate salaries and allowances, which I suppose they make political donation to the NRM party/Cahirman/appointing authority.

In other words, merging these departments is like biting off the hands that feed the regime.
Report to administrator