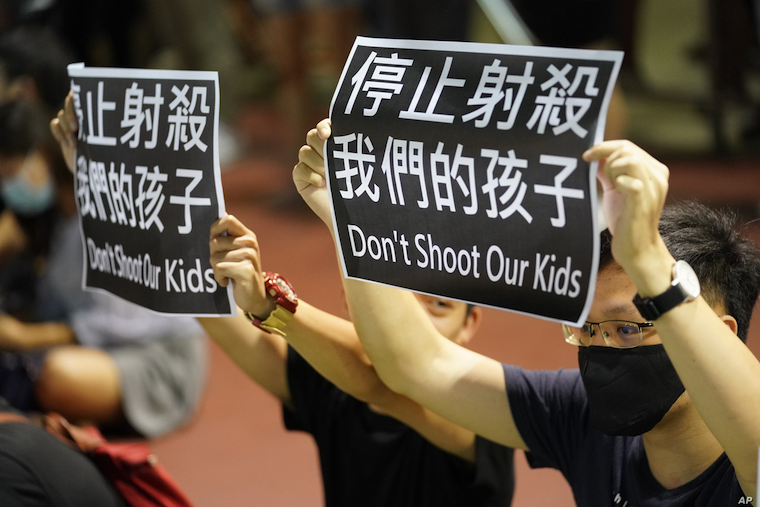 For a country that often accuses and blames foreign elements of meddling in its home affairs, the Uganda government has strangely weighed in and taken sides in the ongoing anti-government protests in Hong Kong.

The protests, which began in June this year were sparked by a proposed bill that would have allowed criminal suspects to be extradited to mainland China, mark a direct challenge to Beijing's tightening grip on the autonomous city.

Although the government later withdrew the bill, the protests have since evolved into renewed demands for Hong Kongers to choose their own leaders, ending the current system where business elites with ties to Beijing select nearly half the legislative body.

In his National Day speech on Tuesday, President Xi Jinping reaffirmed both Hong Kong and Macau's one country, two systems autonomy, but emphasized that his government will continue to fight to reunify the entire Chinese population, which includes the autonomously ruled island of Taiwan.

Now Uganda has said it is concerned with what is happening in Hong Kong. In a statement issued on Thursday evening by the ministry of Foreign Affairs, Uganda says it “firmly supports the one country, two systems policy of the people’s The Republic of China on the matter of Hong Kong and other areas.”

China has since said there are external powers interfering in Hong Kong affairs and therefore China’s. Hong Kong was a British colony for more than 150 years. It became a busy trading port and its economy took off in the 1950s as it became a manufacturing hub.

Britain and China reached a deal in 1984 that would see Hong Kong return to China in 1997 under the principle one country, two systems.

Uganda’s statement is significant in an attempt to cement its relations with China. It wants to be seen on the side of China. Uganda borrows most of its money for infrastructure from Beijing in the last 20 years.

In the global play of politics, Uganda’s statement doesn’t carry much weight. In June while on a visit to China, President Museveni lashed out at western institutions, including the World Bank, for not lending the country money for the railway. He said China was a more understanding country to deal with.

In the same statement, Uganda bizarrely said it “objects to any foreign interference into the domestic affairs of other countries [Hong Kong and China].”

Meanwhile, the Hong Kong government has said it is considering an emergency measure that would include a ban on face masks in an attempt to quell the violent anti-Beijing protests that have rocked the financial hub since June.

Many of the protesters have worn the masks to conceal their identities. The face mask ban would be included in an emergency law that would include a curfew and other measures.

The proposed emergency law which has not been used in more than 50 years is an apparent response to Tuesday's violent clashes between pro-democracy demonstrators and Hong Kong security forces, which overshadowed Beijing's carefully choreographed celebration marking the 70th anniversary of Communist Party rule in China.

Riot police fired tear gas and water cannon at umbrella-carrying protesters, who hurled homemade gasoline bombs at them and set several fires throughout the main section of the city.

During Tuesday's unrest, an 18-year-old student protester was shot at close range in the chest by a policeman as the student was about to strike the officer with a metal rod. The shooting marked the first time Hong Kong police have used live rounds since the demonstrations began.

Police say the shooting was justified because the officer feared for his life.  The student, identified as Tsang Chi-kin, is in stable condition at a Hong Kong hospital. He was charged Thursday with rioting, which carries a maximum prison sentence of 10 years.

Hundreds of demonstrators again clashed with police late Wednesday night in a repeat of Tuesday's protests. Protesters who have flooded the streets since June are certain about what they don’t want: For Hong Kong to become like all of China’s other cities, its special freedoms snuffed out, its status lost as a freewheeling international hub for business and ideas.

Those fears, his schoolmates say, drove Tsang Chi-kin to become a protest leader in his high school, which bubbled with fury Wednesday following the teenager’s shooting during widespread and violent demonstrations that wracked Hong Kong Tuesday, as Communist leaders in Beijing were celebrating 70 years in power.

As other pupils at the Ho Chuen Yiu Memorial College in Hong Kong’s Tsuen Wan district used their lunch break to chant in anger, a 17-year-old student who previously joined Tsang on marches said he and others born after 1997 feel that if they don’t fight now to defend the territory’s liberties, they may never get a second chance.

“That’s why, I think, Kin is so passionate,” said the schoolmate. Like many who fear they could face repercussions for protesting, he would only give a single name, Sam. “He believes that this is the last time, the last chance for us to fight for what we have.”

POLICE USE OF FORCE

But while friends used the word “brave” to describe their wounded schoolmate, the police chief defended the officer’s use of force as “reasonable and lawful.” Police Commissioner Stephen Lo said the officer had feared for his life and made “a split-second” decision to fire a single shot at close range.

Video of the shooting showed the protester striking the officer’s shooting arm with a metal rod, and that he was part of a group of about a dozen black-clad and masked demonstrators who swarmed the officer and other riot police, some hurling objects.

The shooting, the first time a protester is known to have been hit by gunfire, was a fearsome escalation in what is already the most serious crisis faced by any post-1997 Hong Kong leader and is severely testing the strength of Beijing’s commitments to let the territory be largely its own boss, at least until 2047.

For schoolmates of Tsang, the injured protester, those promises are becoming ever-harder to believe. Exhibit A for skeptics was a Hong Kong government proposal that would have allowed criminal suspects to be extradited to mainland China for trials in Communist Party-controlled courts. Although its withdrawal was promised in September, the bill blew away trust that Hong Kong won’t slowly lose its freedoms.

“It’s becoming a small town in China. That’s why we need to stand out,” said Sam, who recalled riding the bus with Tsang to march in central Hong Kong, where protesters have repeatedly targeted government and police headquarters and been repelled by tear gas, water cannons and arrests.

He said Tsang, as a protest regular, advised others about how and where to demonstrate and gave “absolutely everything for this movement.”

A female classmate, tears welling in her eyes, said, “Just last Friday, we were sitting next to each other and chatting and now he’s been shot and in critical condition.”

“We heard police say they may want to press charges against him. It’s preposterous,” said the 16-year-old, who gave only her initials, SY. “Police fired the shot but they want to charge him. Instead of being a victim, he’s been made the perpetrator.”

Seeing youngsters organize, march and be swept up by riot police has infuriated many older Hong Kong residents and swung them behind the movement.

“They try to bind up our hands and feet and then thrust a towel into our mouth to shut us up. It’s tyranny,” said a 60-year-old woman who showed up outside Tsang’s school on Wednesday in a show of support. She gave only her surname, Chan.

But the protests have also split families. Aiden Chan, another 17-year-old schoolmate of Tsang’s who said they had played basketball and worked out together, wanted to join the protests China’s National Day but was grounded by his parents.

“They think that the protests are destroying the city,” he said. He said his parents also believe protesting kids are being brainwashed and “controlled” by foreign powers, suspicions Chan dismissed as “nonsense.”

“When I try to go out, they don’t understand me,” he said. “They just think that as a student I should work hard and I should get into university and that’s all. So there’s quite a generation gap.”

The shooting is likely to increase the gulf between those who fear that the chaos is ruining Hong Kong’s economy and prospects, and protesters who view the police use of lethal weaponry as a harbinger of repression they see in mainland China.

“I saw the video (of Tsang’s shooting) and I’m really shocked,” Chan said. “I still can’t calm down.”

“How can these things happen in Hong Kong?”

Obote and Amin were the Presidents who started such dodgy African statesmanship as their own country went downward into useless continuous civil wars.

One needs to understand why China is so determined to have Tibet, Hong Kong and Taiwan when these countries want to try and live their separate ways.

If in 30 years time they want to come back, China should leave its beautiful doors open for them. Other than that, China should pull out its nuclear bomb and blast these countries off its face. Silly is it not?
Report to administrator
0 #2 kabayekka 2019-10-04 13:32
Some of these big countries do not want to remember their horrible history.

China suffered so much from the conquests of the Empire of Japan 1930/40. It should not put the same suffering on to its neighbouring peoples of today. It certainly needs its many elders to advise it.
Report to administrator
+5 #3 Dreadman 2019-10-04 14:25
And the significance of Uganda's opinion? Could this have to do with the travel ban on Uganda's thugs?

In any case, this kind of statement is just a confirmation that things don't look quite as rosy as before. Long live Uganda.
Report to administrator
+2 #4 WADADA roger 2019-10-04 16:12
Boot lickers will always avoid biting a hand that feeds them, that Uganda for you as if siding with China will add value to the impasse, besides, Uganda does not believe in the rule of law and human rights where protests fall
Report to administrator
+3 #5 Mubiru 2019-10-04 16:46
With all the all platoons of Chinese "eating" businesses etc even in the remote areas of the country no wonder those in Uganda leadership support their friend cum masters- China.

Siding with the brutal Chinese is a wake up call for Ugandans that they are stagnantly slumbering in their beds while their Uganda is becoming another "colony" of Hong under the Chinese dictatorship.

Bebase nga Katonga ajjula. (they-Ugandans- are deadly asleep while Katonga river overflows and floods their properties and houses in which they are dreaming).
Report to administrator
0 #6 rubangakene 2019-10-04 18:32
Do you remember those gramophone in the 60s where there was a picture of a dog listening to the music with the caption; "HIS MASTER'S VOICE" (HMV).

I never really got to know the meaning until now, if you know what I mean!
Report to administrator
+2 #7 Lysol 2019-10-04 19:53
Hong Kong will be free again. Was there in the 90s. The corrupt regime of Uganda is always being opportunistic and make wrong gambles in order to survive.

China is nothing but a fairytale( which produces fake and unhealthy products) with no resources to feed it billions population.

That is why it exploit African resources because we have useless, old dictators in power.. China depends on intellectual property thefts (from the West) to reproduce fake and cheap unhealthy products to fool the naive African leaders.

China will not benefit and fool the world for too long. It will go down like the old Soviet Union.
Report to administrator
+1 #8 Jama 2019-10-05 17:40
After having been shown the back by the west because of misrule, comrade jajja has decided to go far east for clutches.Far east where tyrants are tolerated.
Report to administrator