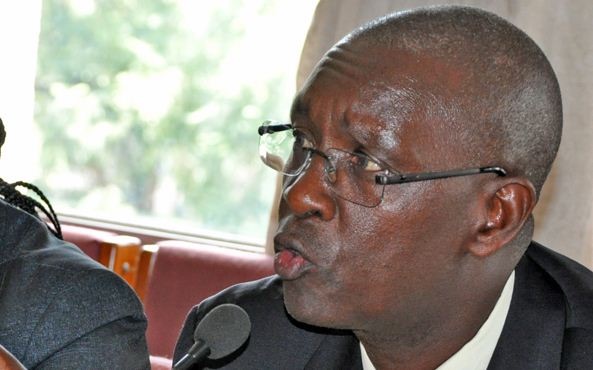 After a humiliating travel ban slapped recently against Gen Kale Kayihura and the denial of a US visa to Pius Bigirimana last week, Kampala has halted all pretense of normalcy at the highest levels of government and asked the US government to name and shame all ranking officials on the American blacklist.

Interviewed yesterday about the US visa denials and blacklist of government officials fingered by Americans for being corrupt and human rights abusers, Ofwono Opondo, the Uganda Media Centre executive director and Government spokesman said, “If there are people being squeezed because they stole money and stashed it there [outside Uganda], that is good, but the problem is, they [US] are not telling us who the blacklisted officials are.”

“The suspected criminals whether corrupt or facing human rights violations should be availed to us, they [US] should provide us with reasons and evidence so that we can deal with them here. We want them to name and shame these officials,” Opondo added.

“It will be good if they tell us which properties they have and where, so that we can confiscate them and recover the money they stole,” he said, adding that President Museveni disapproves of Ugandan officials travelling to western countries to attend conferences and other trainings yet they can easily access the materials online.

Kampala was jostled yet again on Monday by news that Bigirimana, the new permanent secretary to the Judiciary, had been denied a visa to travel to the US to attend a conference at Pepperdine University in Los Angeles, California, along with Chief Justice Bart Katureebe.

Well-placed sources have intimated to The Observer that Bigirimana’s problems stem from the 2012 Shs 500bn corruption scandal that rocked the Office of the Prime Minister where he served as permanent secretary.  Interviewed for a comment yesterday, Bigirimana said, “I don’t want to comment about that matter for now.”

But in an earlier interview with The New Vision carried in the Monday edition, Bigirimana insisted he had not been denied a visa. He said there was simply a delay in the processing of his visa. He said he was in the US in March and will travel again in December.

The chieftains in Kampala were first panicked on September 13, when the Office of Foreign assets Control (OFAC) under the US Department of Treasury, announced a travel ban against former Inspector General of Police (IGP) Gen Kale Kayihura and his family –accused of  human rights violations, corruption and wildlife trafficking.

The Observer has learnt that the US watch-list of potential inductees in Uganda includes several senior officers in police and security agencies and, some cabinet ministers.

Through the Office of Foreign Assets Control (OFAC), the sanctions bar Kayihura and his family from travelling to the USA on top of seizing any assets he may have there.

The Americans, according to the source, have been quietly compiling evidence against several government officials linked to various corruption scandals that have rocked the country in the recent past. Their keen interest is on projects financed by donor funds which Ugandan officials have swindled and stashed away in safe havens outside the country.

The watch-list also has a senior military officer who has reportedly been banned from not only the US but the European Union (EU) member states.

President Museveni in his missive published on September 22 said Uganda stopped sending its security officials to training courses sponsored by western powers after they became selective on which officers should attend the trainings.

Beyond human rights abuses that Kayihura is accused of, a source adds that the USA is keenly monitoring several individuals accused of involvement in what is termed as Illicit Financial Flows (IFF).

Such IFFs included illegal exploitation of mineral resources, drug and wildlife trafficking as well as corruption. The timing of Kayihura’s sanctions, according to some observers, is to warn the ruling class in the country to watch their actions.

“Back in 2013, the US blacklisted several police officers for their involvement in unleashing terror on demonstrators [See: Officers denied US training for their role in quelling ‘walk-to-work’ riots, The Observer December 4, 2013].

Then, the police authorities were kept in the dark until several officers nominated to attend a US-sponsored training course were denied visas. The officers included; Grace Turyagumanawe, Laban Muhabwe and Joel Aguma.

In April 2014, the US slapped sanctions on the late Andrew Felix Kaweesi while he was the Kampala Metropolitan Police commander. Yet again, Kaweesi wasn’t informed about the ban until he was due to attend the course at the Federal Bureau of Investigations (FBI) junior academy in the USA.

They don't follow political orders or favours. If this government is serious about catching thieves and their "loot", they do not have to go far because the evidence is here in Uganda: huge mansions and swimming pools, shopping malls, large tracts of ranches, farms and all unexplained signs of wealth.

BE SERIOUS AND LET THE HAMMER FALL HERE BECAUSE THE "OFFICE" IS HERE!
Report to administrator
+1 #12 Both 2019-10-03 01:50
This is extremely important for the family called Uganda.

We all know what the these people people are doing and have done.

There have been lots of international campaigns(HIPC) for the very poor African countries to have their debts revoked.

Uganda was one of these countries where around 1990/2009 the country's debts were cancelled. Now that all these new funds the friends of Uganda are giving this country are being channelled abroad and the citizens of Uganda are being asked to pay up, who exactly is in the wrong about it all?
Report to administrator
+2 #15 kabayekka 2019-10-03 02:36
It is unfortunate that Mr Ofwono Opondo, the Uganda Media Centre executive director and Government spokesman is not aware of the loss of such funds since 2012.

And he wishes the very kind foreign friends of Uganda to find this problem out by themselves and report it to him as soon as possible. So that he can then...…..
Report to administrator
+4 #16 Denis Shumbusha 2019-10-03 05:12
If Americans really love Uganda they should name all Ugandans with foreign assets world wide so that our citizens know who is embezzling funds in the various sectors.
Report to administrator
0 #17 Lakwena 2019-10-03 08:05
Quoting rubangakene:

If this government is serious about catching thieves and their "loot", they do not have to go far because the evidence is here in Uganda: huge mansions and swimming pools, shopping malls, large tracts of ranches, farms and all unexplained signs of wealth.

BE SERIOUS AND LET THE HAMMER FALL HERE BECAUSE THE "OFFICE" IS HERE!

Rubangakene, last month while appearing on NBS TV live, at 9:00pm, the former Minister of Finance Obote II, Henry Makmot told Ugandans and the world that: 95% of the mushrooming high rise buildings in Kampala, belong to civil servants who earn less than net UShs.3 million a month (M8).

And because of the risk of being exposed, they don't dare visit these properties. If they do, it is in the thick of the night past midnight.
Report to administrator
+2 #18 Lakwena 2019-10-03 08:21
Quoting Wooden K.:

you need to watch your mouth . You can`t embarrass M7 by asking USA to do your work .

If your regime cannot know who owns what property , where and how they got it , then you are all a bunch of useless ticks

Bad weather is closing in .

But Wooden, need you reprimand OO over his big mouth? Remember until he caught red handed, OO is a kleptomaniac, who didn't realize he stole a handkerchief and a Bic pen in UCHUMI Supermarket, Garden City Mall.

In other words, from the top, NRM is a regime of kleptomaniacs who do not only steal cutleries from hotels and restaurants; they even pocket and steal their own, from their kitchen drawers.
Report to administrator
12