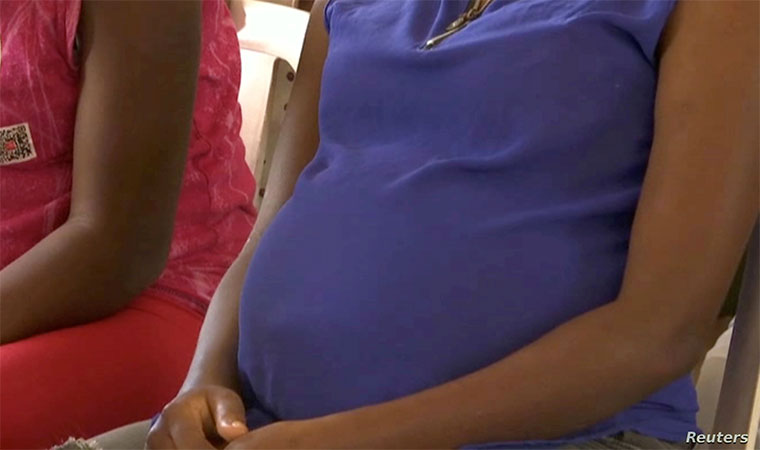 A still image taken from a video shows a pregnant woman waiting at a police station in Lagos, Nigeria, September 30, 2019

Police in Nigeria have rescued 19 young women from a "baby factory" operation in the country's largest city, Lagos.

Lagos police spokesman Bala Elkana said the victims, aged 15 to 28, were rescued along with four babies. The women were lured to Lagos from all across Nigeria with promises of a job, but then imprisoned.

"The young women were mostly abducted by the suspects for the purpose of getting them pregnant and selling the babies to potential buyers. The girls were tricked with employment as domestic staff in Lagos," Elkana said.

Police arrested two women and are searching for the main suspect, identified only as "Madam Oluchi" from Imo State.

Human trafficking and abuse are common among the poor in Nigeria. Last week, a raid at a purported Islamic school in the northern city of Kaduna found some 400 young men and boys, some as young as five. They showed signs of severe abuse and some were found chained.

0 #1 WADADA roger 2019-10-01 12:36
This is so sad, so these girls were used as incubators in a human hatchery where they would hatch babies and sell. it reminds me of a story in Kampala where a certain lady rented a house with a plan to run a modelling agency.

To keep the gals busy, she also opened up a salon and a boutique on the same building. At the bank of the house, she created a room with double deckers for the girls to sleep after work.

In the same place she operated a massage parlor where men would get a double service- massage and the obvious, it was a brothel of the sort where men would call and place their orders for the kind of gals they wanted, she was also supplying Kampala high class hotels with what was termed as royal escorts at about 150Usd.

She was in effect selling fellow human beings to get money and living on the earns of disguised prostitution.
Report to administrator
-1 #2 WADADA roger 2019-10-01 12:45
I fail to understand, does Madam Oluchi know that what she is doing to other people's kids could be done to her own.

Imagine luring these girls with promises of a job and then have then imprisoned in a baby factory such that she get men to rape them or inseminate them with certain person's sperm to get a baby and immediately take the baby to the person who placed the order. So does she qualify to be a slave or a serogate mother.
Report to administrator
-1 #3 Stewart 2019-10-01 13:06
South Africa was right to eject these rascals.
Report to administrator
0 #4 Lakwena 2019-10-01 14:52
In other words, Nigerians also come directly from Hell.

We also can't rule out that they are the ones influencing the spate of kidnapping and murders in Kampala suburbs.

I was surprised one day to find a Nigerian selling car bumpers at Kisekka Market. Concealed in the car bumpers, I could only imagine, what he smuggles into Uganda, and out of Uganda.

As if there is an influx of these brudas, now-a-days more and more loiter around like stray dogs. Given their irritable and offensive slang and English pronunciation; they loud and uncouth
Report to administrator
+1 #5 Goodmanlord 2019-10-01 16:43
Is this what they call news in Kampala because it is happening in Nigeria?. How come you don't report those in Kampala who are Trafficking Human Organs?

So many people have been killed in the areas of Entebbe, Masaka and other places in Uganda purposely for removing their organs and sell them to Pakistan.

No news paper has ever come out to report what is going on as regards Human Trafficking other than Mr. Tamale Mirundi who has done so by telling the public what is happening in Hospitals of Mulago, Kiruudu, Lugazi and some Hospitals in Masaka.

When this happens in NIgeria you run to publish it immediately. How come you don't report or investigate what Mr. Tamale is talking about?

Is it that the Mafia's have paid you off not to report such criminal acts going on in the country?
Report to administrator
0 #6 WADADA roger 2019-10-01 23:24
It is a tip of an ice burg, there thousands of evil acts done under the protection of security agencies.

Even the media is compromised to say nothing or say something in a distorted manner. Like the incident that happened in Mukono the other day, nobody is saying anything about the owner of the swimming pool in which a UCU student drowned, nobody has mentioned that the place did not even have a licence to provide those services, now the story is no longer news because the owner of the hotel- Royal hotel had his way around the media.
Report to administrator