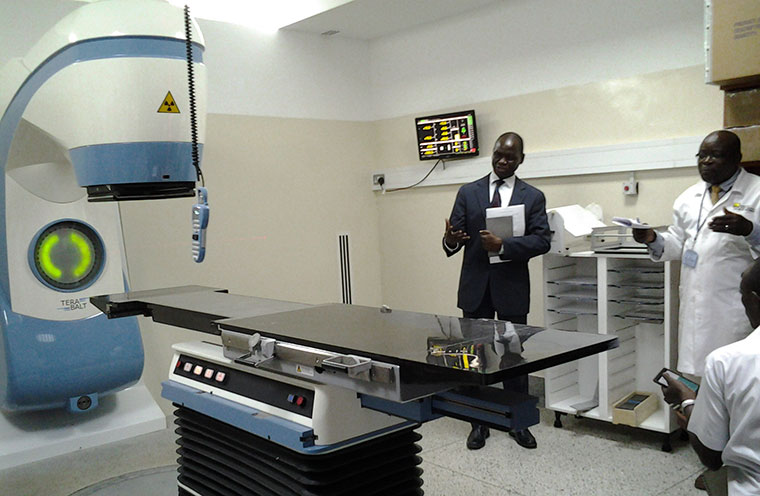 The cobalt-60 teletherapy machine, used for the treatment of cancer, at the Uganda Cancer Institute (UCI) has been closed awaiting servicing.

For the past two weeks, patients seeking radiation treatment at the UCI have been treated after the Cobalt 60 radiotherapy machine closed down.

According to Christine Namulindwa, the institute’s public relations officer, the machine was closed down awaiting an engineer from the International Atomic Energy Agency to service it.

According to a notice to patients, it was mentioned that services were to be halted for a week starting September 24, but Namulindwa says they had to close earlier than that on request by the agency to ensure that there are no people waiting at the time of servicing.

However, she notes that the machine was last serviced in October last year but added that this time should be shorter.

“We treat a lot of people with this machine. Because of this, we are supposed to service it more often”, she said adding that services are set to resume by end of this week after the engineer arrived in the country last week.

According to the manufacturer, the cobalt 60 machine is supposed to be serviced every six months. In an earlier interview, Dr Daniel Kanyike who heads radiotherapy at the institute said the machine works 24/7 every Monday to Friday and can treat 80 patients per day.

This machine was brought in the country in 2016 after the irreparable breakdown of the previous one that had been in use for more than 20 years. Then, the country was thrown into a panic since it was the only one in the country.

Many patients died because they couldn’t access treatment whereas others sought services outside the country. Although by that time the new one had been ordered three years ago in 2013, it only got to be used in 2018 because it was still going through various safety checks. Now, Namulindwa says, radiotherapy services should resume by end of this week.

0 #1 WADADA roger 2019-09-30 23:10
We spent billions of shillings in purchasing two 63 seaters flying buses labeled Uganda airlines, that was a good decision but not a priority for this country and the majority poor who cant afford cancer treatment abroad.

Now many have to suffer because the only cancer machine serving the entire 40 plus million Ugandans.

Lets look at it in terms of millage, if a vehicle has less than 50 km before it is due for the next service and yet your journey is to Gulu which is over 300km, you forego the remaining 50k and carry out service, you dont drive up to Luwero and then start looking for a petrol station to carry out service. Thats the call of common sense
Report to administrator
+1 #2 WADADA roger 2019-09-30 23:12
I hear a one Christine Namulindwa who speaks for the cancer institute said the cancer machine was closed down awaiting an engineer from the International Atomic Energy Agency to service it.

Here is my question, at what point did the institute realise that the machine was due for service.

Ordinarily, they should have invited the engineer before the due date so that servicing is done immediately, what happens if the atomic agency does not have any free Engineer available to service the cancer machine for a month, wont Ugandans die.
Report to administrator
+1 #3 WADADA roger 2019-09-30 23:14
At this point in time, every regional hospital should have a cancer machine such that if any is due for service, patients can be redirected to visit other places for the same service.

If Ugandans have to behave like this in the 21 century, then there is a problem that nobody is willing to address.
Report to administrator
+1 #4 Lysol 2019-10-01 00:52
What a shame! The corrupt regime of M7 brags of development.

Intyenedi, 24/7 means the whole 24 hours a day and the whole 7 days of the week, you dont talk about 24/7 and then you say money to friday, that is a contradiction and can be referred to as 24/5
Report to administrator
0 #8 Kelly 2019-10-01 15:34
By the way, since no single life is equivalent to any amount of money, can we keep the technician permanently in Uganda so that he is only a boda boda away from Mulago?

Well, that is being sarcastic though. The sustainable option is to have trained Ugandan(s) to do the job. But Uganda being Uganda, that possibility of keeping the "mechanic" on retainer basis at an exorbitant cost of say USD $ 1,300 per day is not far fetched, instead of spending $26,000 to train a Ugandan for the same.

After all that fee for expatriate, will also line the pockets of some technocrats in Mulago, Ministry of Health, Uganda Cancer Institute etc. That is how things work in this sh*t country.
Many technocrats feed on chaos. They detest planned and organized things.
Report to administrator
0 #9 rubangakene 2019-10-01 23:10
Is there not a single soul in this blasted government with the wit to plan these things properly?

Just imagine all the 650 of them sitting there in parliament with a "carbon footprint of elephants" and no brains.

They haven't got a clue at all about management; the recent election in Hoima didn't even mention anything about health, education and welfare except the blasted roads.

How much did we spend "electioneering in Hoima and Kaabong for instance; that money could have been channelled to proper use, eish, TUMECHOKWA!!!
Report to administrator
0 #10 Lakwena 2019-10-03 09:47
In other words, there is no Plan B for such essential service/machine! Suppose it breaks down in the process of servicing, the despair will hit the roof.

Since we are vulnerable to cancer, and live and die in a TO WHOM IT MAY CONCERNED Republic, I suggest to Dr. Orem and Co. to start a fundraising drive to augment the purchase of a standby Cancer Machine.

E.g., in my wishful thinking, if today every Ugandan (young and old) contributed just UShs.1,000 only; we would realize UShs.40 billion (US$.11 million).

If e.g. Bishop Odama can do it in order for Lacor Hospital to acquires it own CT Scan why can't right thinking Ugandans do for fellow countrymen/women and children in our condemned government hospital.

In other words, the spirit of voluntarism is what we save Ugandans from the current bewilderment and quagmire in our health service. Otherwise with Mr. M7 & Co., only fighting for himself and family; we are doomed
Report to administrator