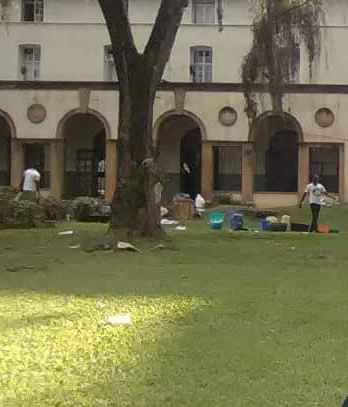 Nsubuga who was a government-sponsored student was found hanging on a rope tied on the doorway in his room at Nsimbirwa Hall Annex PAB 3. He was found by his roommate who had gone to Church for the Sunday prayers.

According to a police statement issued by Kampala Metropolitan deputy police spokesperson Luke Oweyesigire, police visited the scene and the body was taken to Mulago hospital for postmortem.

The reason why Nsubuga committed suicide is not yet known, but police says according to colleagues, Nsubuga has heavily indebted.

This is the second suicide case in Makerere this year. In March, Arthur Basaalirwa, a student at the Business School ended his life following what seemed to be a rough break up with his girlfriend. He first took to Facebook his grief and declared he would end his life.

Last year in September 2018 Joshua Ajuna a fourth-year student at Makerere University also committed suicide. The student left behind a note stating that he had ended his life and no one had forced him to do so.

0 #1 WADADA roger 2019-09-30 12:58
Well, life is full of choices, that is the option he chose and we must respect his decision, congratulations to him and sorry for his parents and friends.

If indeed his reason for taking his life was debts, them am sure debtors have forgiven him. It is okay to be stupid but is harmful to expose stupidity.

I wish Nsubuga knew that in every 100 Ugandans with 100M, 480M is borrowed money, they simply live by day hoping that one day things will change for better
Report to administrator
+2 #2 Geoff 2019-09-30 19:48
Most of the people who commit suicide suffer from mental health eg Anxiety, Depression, PTSD ( Post Traumatic Stress Disorder) etc

It is high time we recognised this epidemic and stop condemning the deceased or calling them names.

Mental Health is a real problem and if nothing is done to deal with it as such, a time is coming when mental health-related deaths will be worse than the other well-known epidemics.

If about 2 to 3 months ago someone had told me that I would suffer from severe anxiety and depression, I would have laughed!

Mental health illnesses are real and it is high time we acknowledged the reality and dealt with them with the seriousness it deserves.
Report to administrator