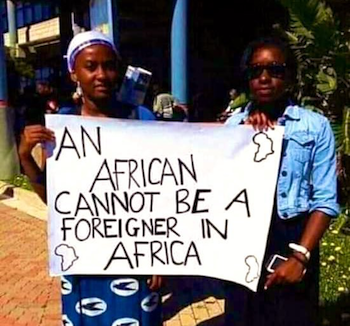 GABORONE, BOTSWANA - The first group of more than 850 Namibian refugees was deported Tuesday from Botswana, after resisting calls for voluntary repatriation.

The refugees fled their home country in 1999, following a secessionist uprising. The migrants had refused to return home citing fears of persecution from Namibian authorities. In the morning hours, 94 refugees, including a one-year-old child, were transported back home.

The more than 800 refugees are being forced to return home after they declined pleas for voluntary repatriation from the Botswana and Namibian governments.

A spokesperson for the refugees, Felix Kakula, says despite the deportations, they will not be silenced and will continue to advocate for a separate state.

"At the event that we are deported back to Namibia, they should inform the Namibian government that people who are being deported are members of the United Democratic Party, such that they should open their prisons and lock us in, because we are not going to keep quiet when we are there," Kakula said.

Most refugees are members of the secessionist party, the United Democratic Party, which remains banned in Namibia. Kakula, together with other Namibian refugees, were declared illegal immigrants after they refused to register for voluntary repatriation at the end of August.

One refugee, who requested anonymity, says the homes they left two decades ago have been destroyed.

"We do not have a place to call home since we have been away from home for the past two decades. Those homes that we had are not there anymore."

She says some of the students, who were born in Botswana and have never been to Namibia, had their studies disrupted at a time they were preparing for examinations in October.

Human rights group Ditshwanelo has called for dialogue on the matter, particularly on the plight of children who were removed from schools. But efforts to engage both governments has hit a snag.

The Namibian government has said it is safe for the refugees to return, but it has vowed to deal with those who identify themselves as separatists.

12
-1 #11 Stewart 2019-09-19 18:23
I do agree entirely with Botswana goverment, Africans sucks and sucks absolutely, they create conflict where it should not be at all and escapes to spoil another country, who brought NRM to power in 1986? are they not the same people fleeing from NRM mbu FDC, People Power, etc We have only three ethnic groups in Africa, i.e. The Bantu, Cushites and Arabs but everywhere there is conflict, just push them out, let them first make their countries good.
Report to administrator
-1 #12 kabayekka 2019-09-19 19:03
Shame on you African leaders (Hage Geingob and Sam Nujoma the revolutionary, anti-apartheid activists) who are persecuting fellow Africans who happen to have a deferent point of view in their own countries.

African leaders should have the decency to rethink their policies when they watch thousands of young Africans walking and using dilapidated boats to get to Europe.

They are running away from you lot and your sin. You are putting African countries in useless perpetual civil wars.
Report to administrator
0 #13 Lakwena 2019-09-20 09:44
Quoting WADADA roger:

Botswana is for the people of Botswana, Namibia is for Namibians, what are Namibians doing in Botswana, buli omu abere ewuwe.

I think many Africans are abusing the meaning of the word refugee.

But Wadada, God gave us the whole Mother Earth, add Universe to live in and explore. But in our stupidity and foolhardiness, we instead want a piece of plot for ourselves.

In other words, we grab, fight and commit genocide over the very grave where we are going to be buried.

What a stupidity STUPID!
Report to administrator
12