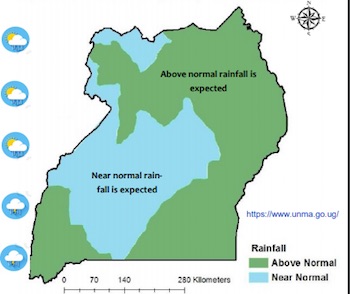 The U-NIEWS has information on food security, market prices of selected crops, seasonal rainfall forecasts according to regions, a map with crop and pasture conditions, disaster early warnings and outlook as well as the refugee status in some districts. It is a 24 hour, 7 days a week central facility for early warning dissemination and coordination of emergency and crisis recovery action.

Rebecca Nabatanzi Ssemwanga, Learning and Knowledge Management specialist at the Strengthening Community Resilience to Climate Change and Disaster Risks (SCORE) project says for instance, as a result of the May-June U-NIEWS bulletin which predicted heavy rainfall, landslides, thunderstorm in the Mt. Elgon region only 6 people died in May 2019. In 2018, about 60 people died.

"We ensure we give messages that different audiences will understand that are timely and can be acted upon,” says Dr Festus Luboyera the executive director of the Uganda National Meteorological Authority (UNMA).

“We use the Early Warning information to inform farmers, cattle keepers and other stakeholders to be prepared,” says Anguzu who sieves the information to disseminate what is relevant to his area, West Nile.

“Progressively, communities have planted crops in line with this information, which is climate-smart agriculture.”

Started in 2014, the early warning information packaged in a bulletin is published by the Disaster Preparedness and Management, Office of the Prime Minister (OPM) with support from UNDP.

Information is disseminated in an inverted pyramid systematic way - at the national level through the National Emergency Coordination and Operations Centre (NECOC) which is the highest, at the District Disaster Management Committee (DECOC) and then eventually at the sub disaster management committees.

Arua, a vibrant, commercial and cosmopolitan district in north western Uganda and on the border with the Democratic Republic of Congo has a DECOC headed by Anguzu. Members meet quarterly, although ideally, Anguzu would love them to meet more often if logistics allowed.

Irrespective of that, information is disseminated smoothly and timely through WhatsApp to targeted beneficiaries and leaders like the Resident District Commissioner (RDC), partners like local non-governmental organisations and to grassroots communities through community radios and dialogues.

It is a multi-sectoral approach at all levels ensuring no one is left clueless about how the climate could affect them. The Uganda Red Cross shares the same information with civil society organizations, development partners and farmers’ organizations on the Disaster Reduction platform and uses it for programming.

It helps the agency to prioritise between preparedness for rapid humanitarian response – in case of emergency - and general investment in resilience to the impacts of climate change, or both, says Kanaahe.

As well, the Uganda Red Cross can pre-position their preparedness and response materials, as necessary, review contingency plans and to advocate for disaster risk reduction and climate change adaptation activities and to plan for ecosystems management and restoration. This can only happen because the Early Warning information shows them areas where there's increasing vulnerability.

They then alert communities to take prior actions like construction of flood resistant huts, opening of water pathways, de-silting dams, water storage, storage of food at home, says Kanaahe.

HOW IT IS DONE

At policy level, the Early Warming information is equally useful especially at the Department of Relief and Disaster Preparedness at OPM, which immediately gets into preparedness mode to reduce damage. UNMA inputs the rainfall and temperatures data into the GIS system that monitors ground cover for the Early Warning system’s information.

Dr Luboyera says another radar will soon be set up in Entebbe to make the weather information even more accurate. At station headquarters in Kampala, the Early Warning system is basically a big room with big flatscreen computer monitors where techies spend time collecting and analyzing data. All you can hear is click, click and the sounds of typing on the keyboards.

The predictions are based on satellite images of the land cover and hydrological flows that the computer monitors show through different colors of images with green, red and infra-red representing different bands.

However, this information is not disseminated before the ‘ground truthers’ based at the district and equipped with mobile phones have an input from what they see on the ground.

“Sometimes we get the satellite observations and they show green vegetation but the ground truthers can tell us it is not true,” says Shafiq Nedala a geographical Information Scientist on the project. Data is then distributed for the different districts including what suitable crops and time to start planting.

Anguzu, who finds the information very useful, has some reservations and advice.

“Information needs to be simplified and localized,” he says. For example, there are no translations for words like risk, hazard, disaster and others.

He also thinks indigenous knowledge should be integrated; like if certain plants started flowering, or particular birds started appearing or migrating - those were early warning messages used by the older generations.

As well communities should be advised about adaptation through Early Warning systems. “They just say it is going to rain too much - how are people supposed to cope?” asks Anguzu.

Kanaahe says the key messages should be translated and disseminated in different languages as well funding for local actors for preparedness actions should be in place.

Andrew Kyeyune, a fisherman at Bwerenga fishing village on Lake Victoria says he uses more informal information than the formal one. He says his actions depend on observation of the winds, clouds, temperatures, and the moon.

Even if there are complaints of inaccurate data, Ssemwanga says the accuracy of the weather and climate data they disseminate has greatly improved and has its own challenges. Key among these is political interference.

To overcome these challenges they sometimes use mainstream media to put out continuous weather alerts to warn the public before disaster strikes. Loudspeakers in markets are also used to echo this information especially in would-be affected areas.

In the future, the project will partner with Telecom companies to send mass early warning alerts.

“The conversation has started and is still ongoing,” says Ssemwanga. “We want to emulate the Sri Lanka model to see how Telecoms send these mass alerts.”

This will be part of the Telecoms Cooperate Social Responsibility (CSR) and a similar project happened in Uganda on Lake Victoria before. After the SCORE project ends in 2020 the U-NIEWS monthly bulletin will still be published; the government has plans to take it on says Ssemwanga.

Asked on a scale of 1-10 how accurate the data they disseminate is, Nedala says it is now up to 8.

“Weather is very dynamic. We aim for the highest mark and zero deaths when disaster strikes,” says Nedala.

“The early warning information is a good product to guide implementers, and contribute to what they're already doing,” says Kanaahe.

0 #1 WADADA roger 2019-09-18 15:21
Isnt this the same authority that provides information to radio and tv stations to broadcast, if it is so then they are just fooling Ugandans

One time i was in Ntinda at lunch time and decided to jump on a boda to town after hearing on radio that it will remain sunny the whole day in Kampala. Was shocked to find heavy rain in Kamwokya all the way to town. I think they just guess their weather forecast.
Report to administrator
0 #2 Salimu Muhamed 2019-09-18 21:39
The radios and TVs actually get info from the internet and not the one of UNMA.

You could partly blame UNMA for not collaborating with UCC to regulate this
Report to administrator
0 #3 rubangakene 2019-09-19 18:57
I doubt if you can accurately forecast weather now in the climate change fiasco.

Try as you may; it is like a dog trying to scratch its itchy 'backside' - going around in circles, clockwise and anticlockwise and eventually reverting to dear earth to drag out the problem!
Report to administrator