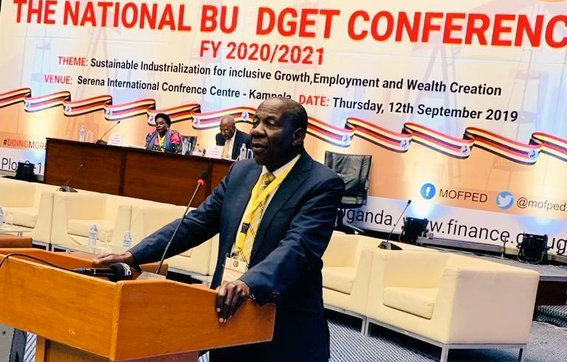 Balanced regional development will be the focus of the third National Development Plan (NDP III), Matia Kasaija, the minister of Finance, Planning and Economic Development has said.

He said beginning with the financial year 2020/21, government will be allocating money to fund projects in one region at-a-time to ensure that all regions are at the same level of development by the end of NDP III.

“We have realised that the private sector cannot invest in certain areas where there are no immediate profits and as government we shall be allocating funds for projects like factories in such areas and after their take-off, we give them to private investors. This will spur development in all regions,” Kasaija said, adding that after developing one region, funds will be allocated to another region until government is satisfied that all regions are at the same level of development.

He said in the NDP II, government set itself a goal to get Ugandans into the middle-income status by 2020 and significant strides have been made. He said every Ugandan is now earning on average US$ 825 per year, adding that by the closure of the plan in June 2020, every Ugandan will be earning US$ 1,039 (about Shs 3.7m).

“Beyond the monetary measures, we have already laid a firm foundation for the economy to thrive. The stock of social service, trade and export infrastructure has increased and export earnings have increased from US$ 3.4 billion to US$ 5.3 billion between 2011 and 2018, Kasaija added.

He said NDP III seeks to consolidate the cumulative gains made over the previous plans and unlock new opportunities for all Ugandans. He added, however, that for the plan to be successful, challenges like low levels of agricultural productivity, an uncompetitive private sector and constraints to private sector investment must be dealt with.

In his speech, Prime Minister Ruhakana Rugunda said over the last 10 years government has made significant progress in building an infrastructure base to support growth, wealth creation and provision of social services especially in energy, transport, ICT, agriculture, health and education adequate to make the economy competitive.

He, however, said there is need to replicate such successes countrywide as well as address regional inequality and poverty especially in the eastern and northern regions.

“The private sector is also crucial to the growth of the economy. It is, therefore, critical for the private sector players to be engaged in these budget consultations so that they can make relevant proposals to the government to address specific challenges that hinder their growth,” Rugunda added.

He further said that discussions on budget proposals for FY 2020/21 should emphasize commercialisation and industrialisation of the economy with particular focus on agro industrialisation, the development of vital minerals and strategic commodities to enable the country add value to the commodities so that they can easily penetrate export markets.

How can any one with brains in his head make such a statement in 2019 that each Ugandan shall earn Shs 3.7m per year in 2020.

We all know that this is a political statement that can never come to pass even if elections are around the corner, Kasaijja should not let himself become a mouth piece for speaking rubbish Uganda Police,s Enanga
Report to administrator
0 #2 Lakwena 2019-09-18 10:39
Because of his dishonesty, and some other mysterious reasons, I just do not like Hon Matia Kasaija. And I do not know and for what reasom Mr. M7 chose him to become the Minister of finance.

In other words, even God cannot convince me that Mr. Matia Kasaija and his appointing authority, Mr. M7 are good men, therefore doing Ugandans good. And for this, I ask God to forgive me.
Report to administrator
0 #3 Kelly 2019-09-18 13:14
“In his speech, Prime Minister Ruhakana Rugunda said over the last 10 years government has made significant progress in building an infrastructure base to support growth, wealth creation and provision of social services especially in energy, transport, ICT, agriculture, health and education”.

Oh my God! Forgive these leeches for they don’t know what they are saying.

Infrastructure in health? Education? This is one of the biggest insults to the nation.

So, soon shall we be seeing daughters, sons and bastards of Ministers being ferried to Kitante, Buganda Road, Nakasero, Umea Muslim primary schools? Or their maids, sisters in laws, cousins being admitted to Kasangati HC IV, Uganda-China hospital Naguru etc?
Report to administrator
0 #4 Emmanuel 2019-09-18 19:52
But how far from today to 2020 ? This statement doesn't make difference with day dreaming, according to me.

These people leave their brains at home when they go to work
Report to administrator
0 #6 martinedau 2019-09-18 21:32
What in the name of life is this mockery. The cost of living.

Because surely emitwalo 30 shillings per month is not enough for an earning income of a Uganda family of 5 members in the year 2020 with the system of taxation by the URA.
Report to administrator
+1 #10 Henry Baisi 2019-09-21 10:20
What do you mean re: "to earn ". Is Kasaija planning to send a cheque to every Ugandan or are we talking about Income per capita?

When I studied at Mwiri, the school fees was Shs 650 per year. Today it is about Shs3m. My father had 5 of us at Secondary school. He was considered poor.

Mr Kasaija - Shs 3.7m will not enable us to feed our families and educate our children.

Today each Uganda family needs to earn that money monthly.
Report to administrator