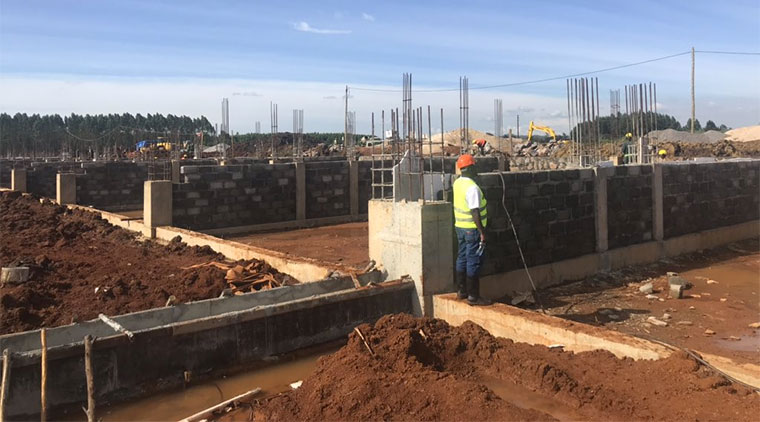 The constriction site for the Kiira Motors vehicle plant

Dr Elioda Tumwesigye, the minister of Science, Technology and Innovation, used a recent three-day stakeholders meeting in Jinja, to announce that government will create more jobs and viable industries by supporting commercialization of local innovations.

Speaking at the first stakeholders consultative retreat on the value proposition of establishing sustainable automotive industry value chain in Uganda, Tumwesigye said his ministry will register all innovators across the country and set up a committee of experts to select innovations that can be commercialized to spur economic growth and national development.

The retreat, attended by MPs on the oversight committees of Science, Technology and Innovation, Budget, Infrastructure Development and Public Accounts Committee and the National Economy was held in the eastern town of Jinja.

The minister said there are many good local innovations that fail to transition to commercial products due to lack of adequate funding. He said government has provided an innovation fund of Shs 10bn for the financial year 2019/20 to support local innovators. The fund is expected to grow to Shs 500bn.

Tumwesigye, who is superintending the development of the automotive industry in Uganda, urged parliament to support the release of Shs 44bn to complete construction of the first phase of Kiira Vehicles Plant at Jinja Industrial and Business Park. The parliamentary committee on Science, Technology and Innovation led by Fred Bwino Kyakulaga commended Kiira Motors and government for promoting local content at the Jinja plant.

He said the example set at Kiira Vehicles Plant should be spread across other sectors.

“It is a big achievement that we don’t see any foreign firms here. All the works are being undertaken by local companies and yet this is a big government project,” he said.

While briefing journalists after the retreat, Bwino said that out of every 10 employees at the construction site, seven are from the Busoga sub-region, a move he said would boost the local economy.

The construction of Uganda’s first vehicles plant is being undertaken by the National Enterprise Corporation (NEC), the business arm of the Uganda People’s Defence Forces, the main contractor for building works.

0 #1 WADADA roger 2019-09-18 09:51
Okay, and why is your news paper showing us a building instead of any of the products being the subject of innovation, you have clearly made it known that the building shall house kira motors but it s still under constructions and i wonder what it has got to do with innovation, think
Report to administrator