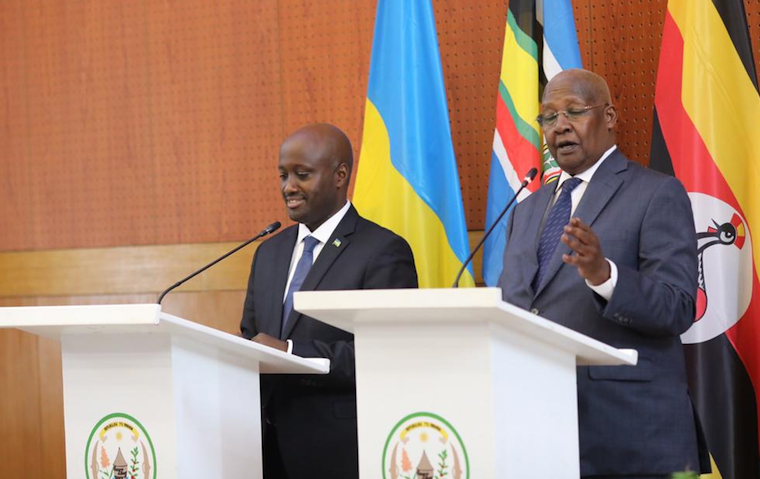 Talks between Rwanda and Uganda ended today with the two nations agreeing to treat each other’s citizens well.

However, the issue of reopening the border and free movement of people has been pushed to the next meeting, which will happen in Kampala after 30 days.

In a communique, signed by Oliver Nduhungirehe, the Rwandan minister of State in charge of the East African Community and Sam Kutesa, the Ugandan minister of Foreign Affairs, both parties agreed that the issue of free movement of persons and goods and services across the common border and other outstanding issues shall be discussed in the next meeting.

This means the Gatuna border will remain closed for now. Rwanda closed its border to Uganda earlier in February and also blocked its nationals from crossing into Uganda saying their security could not be guaranteed while they were in Uganda. Today's talks were meant to operationalize the peace pact that President Yoweri Museveni and Paul Kagame signed last month in Luanda, Angola easing tensions between Kigali and Kampala.

The communique shows that Rwanda provided a list of Rwandans detained in Uganda and that Uganda offered to verify the information for the purpose of processing those named through the due judicial process. Those found with no evidence of criminal conduct will be released immediately. Both countries also agreed to desist from destabilising peace in both countries.

“Both parties agreed that due process will be followed in dealing with each other’s citizens. Both parties reiterated their commitment to refraining from any acts of destabilization against each other,” the communique read.

Also, they agreed to finalise the extradition treaty in order to provide a framework for the future exchange of criminal fugitives.

Meanwhile, authorities in both countries continue to block each other's news websites with Uganda blocking the Rwandan mouthpiece, New Times Rwanda, while Rwanda is blocking major Ugandan websites including The Observer, New Vision, Daily Monitor, Chimpreports, Nile Post among others.

+2 #1 Lysol 2019-09-16 22:23
The corrupt Sam Kutesa (silly/wicked smile) has already resigned by default from the corrupt regime Any agreement with him is non- binding.

He is a fugitive, wanted in the US. He should have been be locked up by now. Just a matter of time. Kagame is too smart for M7,he knows all his dirty tricks as a former student/protege. . .
Report to administrator
0 #2 Lakwena 2019-09-17 10:10
In other words, wasting our meager resources on false relations. E.g., the body language of Mr. M7 and Mr. Kagame in Luanda last month, exposed the falsehood and insincerity of the MoU (memorandum of misunderstanding).

Because their relationship has atrophied, and the mutual mortal suspicion has hit rock-bottom; the two nemeses didn't even want to look into each others face, nor touch each others hands:

After signing the MoU, someone had to stand between them in order to make a false cheers. That is how the relationship between Uganda and Rwanda is dead and cold.
Report to administrator