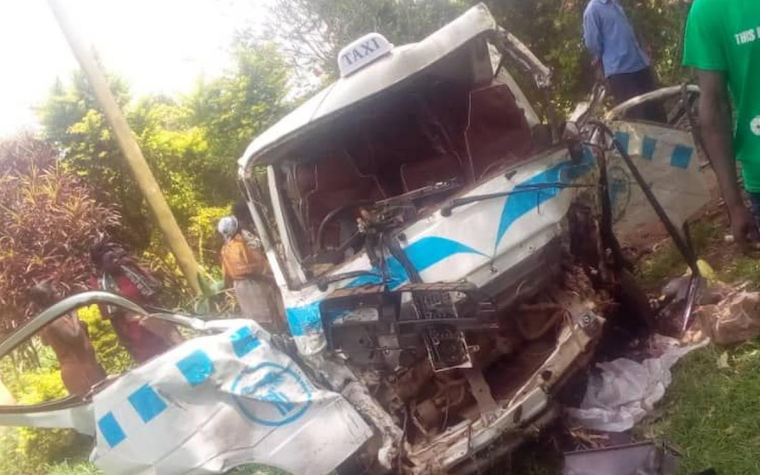 The wreckage of the taxi

Eight people have been killed and nine others severely injured in an accident along the Jinja-Kamuli highway.

The accident which occurred on Sunday involved a commuter taxi registration number, UAZ 861J travelling from Jinja district. The taxi developed a puncture and knocked down a motorcycle carrying two passengers who died instantly.

The driver then lost control and knocked an electric pole in Nawantumbi village, killing six passengers. One of the eyewitnesses, Yakutu Waiswa, says that the driver was overspeeding.

"The driver was speeding and failed to limit speed even when he reached our trading centre which is highly populated with a lot of motorists," he says.

Fatuma Nakyanze, a survivor says that the taxi was overloaded.

"The taxi had loaded 18 passengers instead of the recommended 14, and when it overturned, some failed to jump out and suffocated due to congestion," she says.

The Busoga North police spokesperson, Michael Kasadha says that the injured have been admitted at Kamuli hospital.

It is the rainy season and they should be tending their fields. The government should create a company to distribute essential good to district centres so that no one has to travel long distances to buy purchase them cheaply from Kampala.
Report to administrator
0 #3 WADADA roger 2019-09-16 23:59
Hear this,.............. "The taxi had loaded 18 passengers instead of the recommended 14, and when it overturned, some failed to jump out and suffocated due to congestion," she says............"

And guess what, that road has so many traffic points who only eat money and let overloaded vehicles to continue, who will reorganize and bring sanity to this country.
Report to administrator