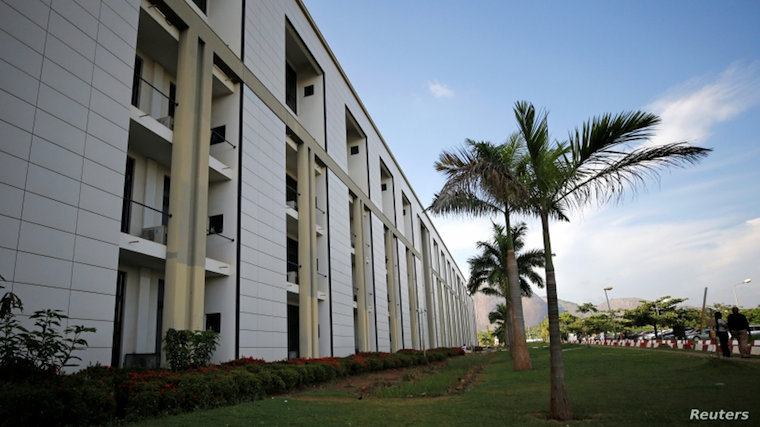 A photo shows part of the parliament house in Abuja, Nigeria

ABUJA - It’s unprecedented. Thousands of Nigerians have joined a lawsuit seeking to block members of the Senate from using public money to buy luxury cars. The suit was initiated by rights groups that became tired of government corruption.

More than 6,700 Nigerians have joined suit that aims to prevent parliament from releasing 5.5 billion naira -- equal to about $15 million (about Shs 55 billion) - that would enable leaders of the Senate to purchase luxury vehicles.

Three domestic rights groups originated the suit, which was filed with the Nigerian Federal High court. One of the NGOs leading the lawsuit is civic organization BudgIT. It tracks government spending in an effort to fight corruption. Shakir Akorede, the group’s communications associate, spoke on the class action suit.

"This is living the luxury life by the so-called representatives of the people. How in any way does this plan show the seriousness, the commitment on the part of the government to solve our socio-economic crisis?" Akorede asked.

The activists are calling the luxury car allocation unjust, unfair and unconstitutional, a waste of taxpayers’ money. News of the allocation spread across social media, creating widespread anger.

The Nigerian Senate’s spokesman, Dayo Adeyeye, told local media that the news is a rumor and that he hadn’t heard about the allocation. He added, however, that government officials are entitled to purchase cars and that he cannot imagine himself in a car used by a former senator.

Senators have become accustomed to purchasing new cars with every new term. But political scientist Auwul Musa says this wouldn’t happen if former senators did what they were supposed to do and return the cars they purchased while in office.

Musa, who is the director the Civil Society Legislative Advocacy Center (CISLAC), headquartered in Abuja, said he does not think the lawsuit will effect any change and that Nigerian lawmakers have long abused public money.

CISLAC reported that the current administration of President Muhammadu Buhari has done little to curb government excesses, although Buhari campaigned on the pledge to do something about it.

Some analysts say the government should allocate such money to the police. The undermanned and underfunded police force is tasked with tackling the rise in armed banditry and kidnapping along roadways around the country. Another factor behind the public outcry is rising poverty. Data show the majority of Nigeria’s population lives on less than $2.00 a day.

Meanwhile, Nigerian lawmakers are among the highest paid in the world. Last year, a Nigerian senator revealed that the legislators receive a monthly package of 14.25 million naira. That’s more than $40,000 (about Shs 146 million) a month.

Many Nigerians have always been arrested in foreign countries because of corruption. Uganda is also become like Nigeria. It's a disgrace to Africa and it's leaders.
Report to administrator
0 #2 kabayekka 2019-09-16 13:37
This is good reading for the gregarious government journalist Tamale Mirundi.

It is unfortunate that United and big Nigeria with over 100 vernacular languages still languishes in modern communication with only one official foreign language which is English.
Report to administrator
0 #3 rubangakene 2019-09-16 22:37
Greed begets greed; when will this stop in Nigeria and they are all over the world ad thousands are among us here in Uganda doing dubious things as we speak.

Recently a Nigerian was 'barbequed' in Mexico for defrauding a Mexican the picture is SAD!
Report to administrator