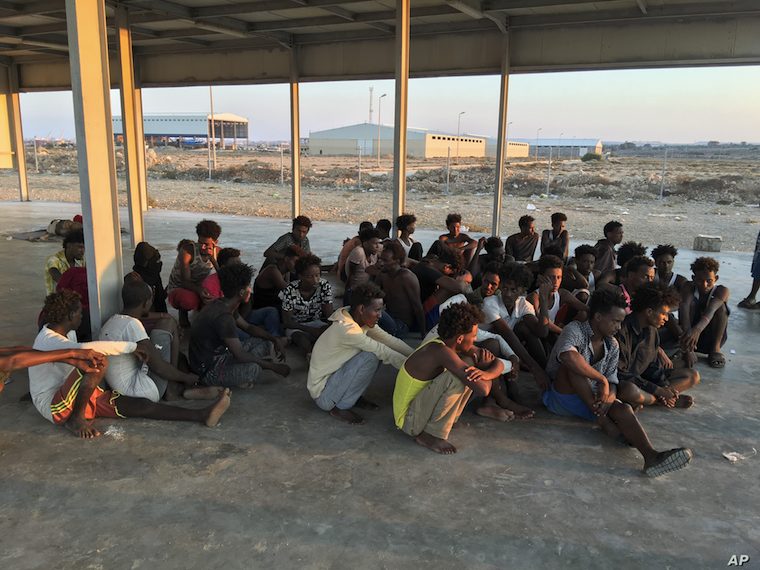 Hundreds of refugees trapped in Libyan detention centers will be evacuated to Rwanda as conflict rages in the north African nation, the United Nations said Tuesday.

Vincent Cochetel, special envoy for the central Mediterranean for the U.N. refugee agency (UNHCR), said 500 refugees would be evacuated to Rwanda in a deal signed with the small east African nation and the African Union.

“The agreement with Rwanda says the number can be increased from 500 if they are satisfied with how it works,” Cochetel told the Thomson Reuters Foundation in an interview ahead of the official UN announcement.

“It really depends on the response of the international community to make it work. But it means we have one more solution to the situation in Libya. It’s not a big fix, but it’s helpful.”

Jumping off point to Europe

Libya has become the main conduit for Africans fleeing war and poverty trying to reach Europe, since former leader Moammar Gadhafi was toppled in a NATO-backed uprising in 2011.

People smugglers have exploited the turmoil to send hundreds of thousands of migrants on dangerous journeys across the central Mediterranean although the number of crossings dropped sharply from 2017 amid an EU-backed push to block arrivals.

Many are picked up at sea by the EU-funded Libyan Coast Guard, which sends them back, often to be detained in squalid, overcrowded centers where they face beatings, rape and forced labour, according to aid workers and human rights groups.

The UNHCR has said there are about 4,700 people from countries including Eritrea, Somalia, Ethiopia and Sudan in Libya’s detention centers.

A July airstrike by opposition forces that killed dozens of detainees in a center in Tripoli has increased pressure on the world to find a safe haven for the refugees and migrants.

Under the deal, refugees who want to go will be airlifted to Rwanda and stay in a transit facility on the outskirts of Kigali. Priority will be given to the most vulnerable, such as unaccompanied children, disabled and elderly people. Most of the refugees will be from countries in the Horn of Africa.

Cochetel said some evacuees may be resettled in third countries, while others will be helped to return to countries where they previous had asylum, or to their home countries if it is safe. Some may be permitted to stay in Rwanda, he added.

Rwanda to the rescue

Landlocked Rwanda is one of Africa’s most densely populated countries and already supports about 150,000 refugees from neighbouring Democratic Republic of Congo and Burundi.

Cochetel said funding would mainly come from the European Union, but also from the African Union, which has received $20 million from Qatar to support the reintegration of African migrants and refugees.

Rwanda is the second African nation to provide temporary sanctuary to refugees and migrants stranded in Libya after Niger, which has taken about 2,900 since 2017.

Cochetel said such moves by African countries were positive because they demonstrated to Europe that there were “things happening” there.

Yet critics have accused the European Union of seeking to curb the number of migrants reaching its shores by outsourcing the crisis to poor African nations.

Some analysts have expressed fears that evacuees could end up staying in Rwanda for long periods awaiting resettlement in a European country.

“On one hand you could say that anything is better than being stuck in a Libyan detention center, so the fact that this gives refugees the opportunity to get out is positive,” said Jeffery Crisp, an expert on migration and refugee issues.

“But many of the refugees will be expecting resettlement in Europe, which can often take time — and you have to wonder if the EU is going to make these resettlement places available,” added Crisp, a research associate at Oxford University’s Refugee Studies Centre.

Rwandan and UNHCR officials said the aim was to remove people from danger and provide them with temporary safe shelter where they would be given options for the future.

“The refugees are in serious danger in Libya. It has been two years since the Rwandan president said that we are ready to contribute to find a solution by taking some of them. The UNHCR is also calling for other countries to take them.”

0 #1 WADADA roger 2019-09-12 17:14
I think this problem of refugees needs to be controlled by individual countries, the influx is overwhelming and is a threat to international security.
Report to administrator
0 #2 Nketa San 2019-09-13 07:40
How I wish Rwanda would first of all bring its own nationals back home.

There are many Rwandans littered all over the world. Biggest numbers are in Uganda
Report to administrator
-2 #3 Eddy G 2019-09-13 09:36
Thanks to Rwanda for their unselfishness gesture!