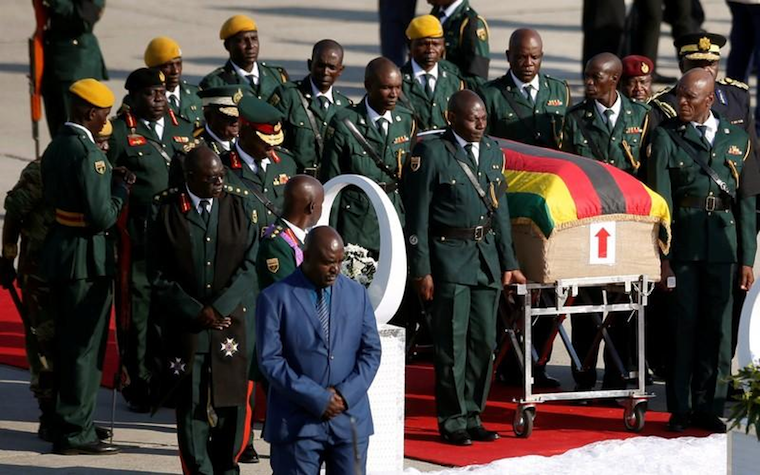 A crowd of thousands of Harare residents grew suddenly, eerily silent Wednesday afternoon as an unmarked plane rolled slowly down the tarmac, bringing home the body of the man who many consider the father of Zimbabwe.

The flag-draped casket carrying the body of former President Robert Mugabe was somberly welcomed in Harare by top officials, by the military elite, and by thousands of mourners as it returned to the country that Mugabe ruled for 37 years.

The famously strident leader, who came to power in 1980 as the first leader of post-independence Zimbabwe, vowed he would die in office. He didn’t.

Instead, he was forced to resign in 2017 by his deputy, Emmerson Mnangagwa, who had the support of the military. Mugabe died last week at a hospital in Singapore — an indictment, his critics say, of Zimbabwe's once-admired hospital system, now in tatters after decades of his autocratic rule.

President Emerson Mnangagwa, who was formally elected a year ago, has declared a period of national mourning until the burial.

“The entire nation of Zimbabwe, our people, across the board, are grieved and are in mourning because the light which led us to independence is no more,” he said, as Mugabe’s widow, Grace, clad head-to-toe in black lace, dabbed at her eyes with tissues. “But his works, his ideology, will continue to guide this nation.”

But Mugabe's final resting place remains up in the air. According to local media, Mugabe's family wants him interred in his rural village, instead of the iconic Heroes’ Acre cemetery. The burial is scheduled for Sunday.

And his legacy is similarly in flux. Was he a liberation hero? Or a villain who pillaged the nation’s economy? Or both? Zimbabwe’s citizens are still trying to figure that out, and maybe for years to come.

But as the sunset over Harare Wednesday evening, the city’s normally frenetic residents froze, on street corners, and in their cars. Many drivers got out to see a sight worth stopping for: Robert Mugabe’s funeral cortege, making its way through the heart of the country he once called home.

0 #1 WADADA roger 2019-09-12 12:25
Mugabe was the only surviving African hero, thanks for doing justice to the whites and thanks for loving your country, May the almighty God forgive your short comings and place you in the same room with the likes of Moses, Elijah, Abraham and virgin mary
Report to administrator
0 #2 Wazza 2019-09-12 13:01
Shame shame on all of you dictators!!

You leave your countries' health care system in tatters, die abroad then expect a heroic welcome and colorful send off. What a tragedy!!
Report to administrator
0 #3 Akot 2019-09-12 13:09
Well, even +90 years old, African self styled life time rulers go abroad for medical treatment, far from the countries they ruled for +30 years, but have no health services good enough for them!

The good part of this is that Mugabe was thrown out before dying in office, leaving the country in confusion as to who takes his place!

It's time Ugndans wake up as they will have to face Museveni's natural departure, unless our people are alright with the demon's military son taking his dad's place & the family business goes, Museveni's family legacy remain safe!
Report to administrator
0 #4 Wooden K. 2019-09-12 13:17
Hello Africa , here we go again

Here is what happens to your "strong leaders " aka. revolutionists.

Field Marshal Jean Bedel Bokassa .dies of a massive heart after returning from exile in France

Col. Muamar Gadaffi gets shot by a boy while hiding in a trench. No one , not even his family, know where his grave is.

Milton Obote dies in South Africa . He is denied a state funeral by Another "strong leader".

Life President Robert Mugabe dies. It takes a day to find out that he actually died thousands of miles away from his Palace .

Look : Mugabe gets only one wooden coffin -like the poorest dead guy.

None of his cadres , supporters or Generals jumps in with him .

DEATH , has brough him down to earth

None of his cadres , supporters or Generals jumps in with him ."

"you reap what you sow" says the bible.

Mugabe was a rude man who cared less whom he hurt.

To hell with everyone who called him a dictator while he was alive , and now call him a hero because he is dead.

See : those soldiers look very sad as they tow Mugabe`s stiff . , but they are the very ones who sent him packing barely two years ago.

We , in Buganda , refused to honour Obote while he was alive and after he was dead.
Report to administrator