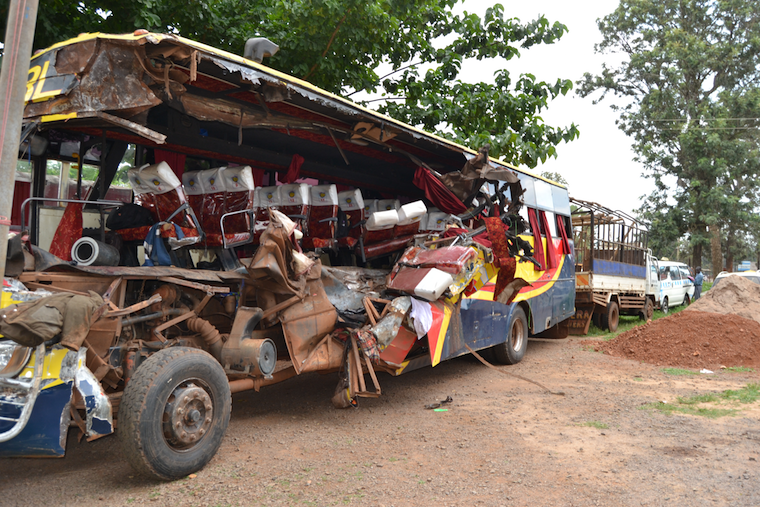 The wreckage of the bus

An accident involving a bus belonging to Robyln Coaches in Nakasongola district along Kampala-Gulu highway has claimed the lives of seven people and left nine others critically injured.

Some of the dead have been identified as Mathew Stanley Ochora, a teacher at Jinja college SS, Johnson Akena from Kitgum municipality, Stella Namono from Mukono and Susan Akello.

The accident occurred at Namayonjo village at Wabigalo trading center in Nakasongola district around 1 am this morning. Patrick Lugonvu, the Namayonjo village LC 1 chairperson, says the driver of the bus, registration no. UAQ 643W destined for Kitgum rammed into a stationary tipper truck registration no. UAH 001Y ripping off some parts killing five of its own occupants on spot.

Two other passengers died this morning at Bishop Ceaser hospital. Lugonvu says that residents and traffic policemen later came to rescue of the injured before rushing them to Nakasongola health center IV for treatment and Nakasongola army hospital.

Charles Ssembabulidde, the traffic police spokesperson blamed the accident on reckless driving on the party of the bus driver and poor visibility at night.

I have said it over and over again that bus drivers need to constantly alternate.

Secondly, i wonder what happened to the speed governors that Government tried to enforce some time back.
Report to administrator
+2 #2 Lysol 2019-09-11 21:23
That two-lanes Kampala-Gulu highway built by the Israelis back in the 60s is outdated.

All highways /roads should have at least 4 lanes minimum. . Too many unnecessary lost of lives due to the poor infrastructure the so-called development of Museveni's corrupt regime.
Report to administrator
+1 #3 rubangakene 2019-09-11 21:47
The carnage continues! What can we do to stop this? Leaders and have to change the law in order to punish the operators of these death traps.

Obviously, they don't give a toss so long as this government gives them just a "pat on the back" and they are on the road again minting money.

My brother rubangakene, that cry could on come to fruition if had patriots ruling us, but alas, we are ruled by mercenary.

My close associate works with UNBS as quality assurance enforcement officer. He said so many times they close illegal/sub-standard/fake manufacturing factories, at times before they move 50 metres from the premises a call comes from "above" ordering them "not to exacerbate the unemployment situation"!!!

These calls are normally from ministers and high ranking military officers in this country.

They end up, with a lot of humiliation opening and "apologizing" to the proprietors and fake/sub standard products continue flooding our market.
Report to administrator
+1 #5 WADADA roger 2019-09-12 09:02
Lysol, that Kampala-Gulu Road was re constructed just a few year ago, the one constructed during Amin's time was wasted and i also dont think the problem is with the road, i believe it has alot to do with recklessness, poor visibility, tired drivers, sharp corners without road signs and reckless drivers whose vehicles upon getting mechanical problems are left without proper reflectors or warning signs for motorists to slow down
Report to administrator
0 #6 Kelly 2019-09-12 13:35
WADADA rogers, I strongly believe the road factor is the highest contributor.

When you try overtaking pedestrians or boda boda riders you automatically cross into on coming lane.

Ever heard of road designs with walk lanes, bends and climbing lanes on paper but on the ground nothing of that nature exists?

Have you seen how narrow the Kawempe-Wobulenzi stretch is? Try driving back to Kampala on Sunday evening from Matuga to Bwaise you will curse if the lead car is slow because as a result of the bends and narrow road, any sensible driver can't overtake.
Report to administrator
0 #7 Akot 2019-09-12 13:42
rubangakene, agreed, but,

It's the people who bring change of leaders & ensure they are served!

Museveni has reduced Ugandans to NOTHING but slaves doing as he wishes & unless UNITY throws him out, there is no way things will change for the better!

The more oppresse, more poor people are, the more strong dictators are!

Ugandans MUST bringing down the tribalistic system & UNITE to show Museveni way out!

Why do Ugandans prefer Museveni to;

Museveni is going no where as it Ugandans keeping him in power through the tribalistic system that allows no room for common opposition leader & UNITY of for common purposes!

Ugandans MUST give themselves chance by rallying around Bobi Wine, to ensure Museveni is OUT?
Report to administrator
0 #8 Akot 2019-09-12 13:47
Kelly, thanks.

It's time Ugandans take back their country & stop Museveni using them against one another only to rule for life, then WHAT, when he will be no more?

Why are Ugandans just helping Museveni destroy them & thier country for good?
Report to administrator
0 #9 Akot 2019-09-12 13:58
WADADA roger, understood, so,

The entire country MUST become property of Ugandans who will then begin to build it as they wish, right?

What will tribal leaders standing down & UNITY that will leave Museveni land less, cost Ugandans?

Which tribal land/tribes will support Museveni in another liberation war & who will he be fighting to liberate Ugandans from?

Why do Ugandans go on harassing, arresting & locking up one another in prison to ensure Museveni is unopposed & rules for life?

Ah! Ugandans have already forgotten Dr S. Nyanzi who has no place in the country, except in prison because she destroys Uganda & poison life for Ugandans!!!
Report to administrator