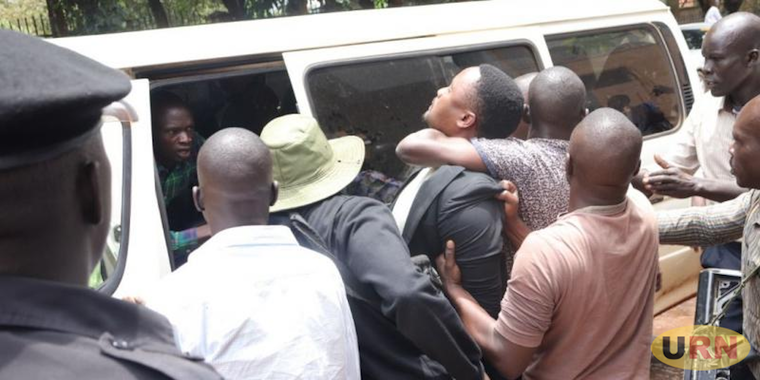 The Kololo-based International Crimes Division of High court was a scene of drama this afternoon during the re-arrest of four of the eight suspects charged with the murder of former police spokesperson, Andrew Felix Kaweesi.

Yusuf Nyanzi, Jibril Kalyango, Joshua Kyambadde, and Yusuf Mugerwa were dramatically picked up together with their lawyer, James Mubiru shortly after being discharged by the registrar of the International Crimes Division of High court; Esther Nasambu following their bail release by Justice, Lydia Mugambe.

Both uniformed and plain-clothed security officers locked the main gate of the court to block the bailed suspects from leaving. The suspects who were driving in a Noah vehicle registration no. UAY 077T belonging to their lawyer, Mubiru and another belonging to counsel, Godfrey Turyamusiima tried to exit the court premises.

It is at this point that a team of heavily armed operatives sprang out of a white Super Custom vehicle registration number UAF 257E and dragged out the suspects.

They bundled the suspects into the Super Custom and whisked them away. The remaining suspects including Abdu Rashid Mbazira, Aramaathan Noordin Higenyi and Bruhan Balyejusa and Shafiq Kasujja had earlier on been returned to Luzira prison because they have pending charges in Nabweru and Mukono Magistrate’s courts.

Kaweesi, the former assistant inspector general of police and his bodyguard, Kenneth Erau and driver, Godfrey Mambewa were gunned down on March 17, 2017, a short distance from Kaweesi’s home in Kulambiro in Nakawa Division in Kampala.

The suspects were picked from various districts in the country and were charged with murder, aggravated robbery and terrorism.

They both dress the same, and they both kidnap in the same manner. This is kidnapping it is not arresting.

Cant the ugandan security apparatus operate in a way that would separate them from criminal armed gangs?
Report to administrator
+1 #12 Miki 2019-09-12 16:36
Arrest of suspects is okay if there grounds to. Just do it properly - have a warrant of arrest, present it to the suspects and take them into custody.

It is very important for people to be able to tell the difference between the legitimate security agencies and criminals.
Report to administrator
0 #13 WADADA roger 2019-09-12 17:35
Quoting Wainanchi:

@Wadada Rogers-- Opppsy Daisy!! Who are you to threaten and torture patriotic Ugandans??

You show us your shitty and ugly face to face the music.You dirty muyaye!!!!!

I didnt use abusive language because am civil, Iknow many Ugandans who used to think like you mbu they are patriotic kumbe wapi, we have heard slogans like twatera mbundu, we have the majje etc, even Besigye used to sing that song, even Sobby, Kitatta, look out for the guys who used to work under Kayihura, they didnt know things would fall apart.

Your time is coming we we shall have the last laugh.
Report to administrator
0 #14 Socrates 2019-09-12 22:36
This fake wanainchi is a special force criminal under the influence of alcohol.

I would do the same if the suspect is of such class of crime. These bureaucracies are partly the reason justice is delayed
Report to administrator
12