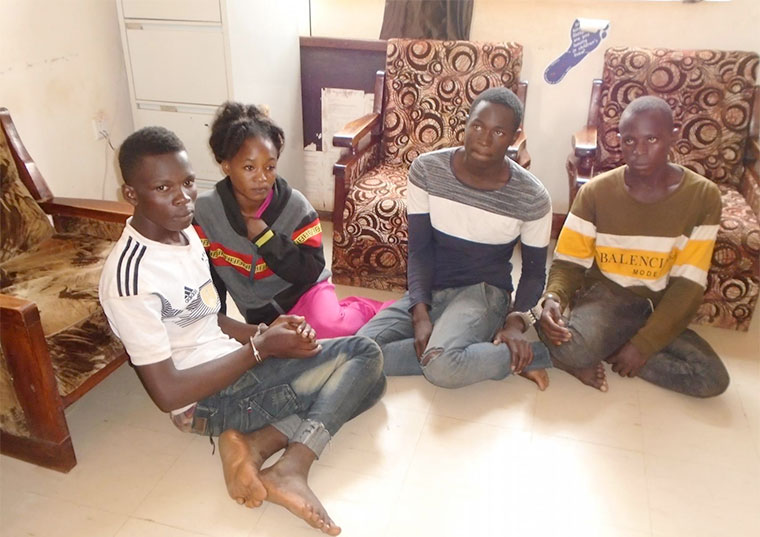 Some of the arrested suspects of the Three Star gang

Police in Luweero district has arrested four members of the notorious Three Star gang for allegedly kidnapping a top class pupil and subsequently demanding a ransom of Shs 7 million.

They are part of a gang comprising youths aged between 16 and 18 years, with a base in Wobulenzi town. All members of the gang have green three-star tattoos on their hands as a form of identification.

It is alleged that on Friday the gangsters kidnapped Amos Matovu, a 7-year-old pupil at Wobulenzi public primary school and hid him at Ssekamuli village before seeking a ransom from his father Edward Patrick Muwonge. According to Muwonge, the kidnappers hoodwinked the child that they were going to buy him a watch before grabbing him and riding away with him.

Luweero district police commander Ahmed Musakana says that police and Uganda People’s Defense Forces (UPDF) tracked the kidnappers using phones that they were using to demand for a ransom and later found the child at the home of Sam Ssempijja, one of the gangsters at Ssekamuli village.

In an interview with URN, one of the suspects Ashraf Kakembo confessed to engaging in the kidnap but didn’t divulge details of their mission. The police has already preferred charges of kidnap against the four suspects. The child is now undergoing counselling by the Child and Family Protection Unit before he is handed over to his parents.

Luweero resident district commissioner Phoebe Namulindwa condemns the rampant kidnap cases and blamed youths who are using it to get quick money. Namulindwa says that police recently arrested youths who self-kidnapped themselves with intentions of soliciting money from their parents.

According to the annual crime report by the police, Kidnaps have been motivated by the demand for ransom, vengeance by lovers,  terrorism, extortion or self-gain from relatives and ritual purposes among others.

A total of 202 persons were registered as victims of kidnap in 2018. Of these, 16 victims were killed, 84 victims were rescued by police and 99 among others were self-kidnap whereas three were still missing by the time of releasing the report.

The penal code act stipulates that a person who kidnaps a person with the intent to procure a ransom or benefit for the liberation of such a person in danger of being murdered commits an offence and is liable to suffer death upon conviction.

0 #1 WADADA roger 2019-09-10 15:20
During the dark days, there used to be a prison for hard core criminals in Namalu- Karamoja sub region, that is where these guys should be taken
Report to administrator
0 #2 Mubiru 2019-09-10 16:34
Apart from thieves making innocent Ugandans "swim" in everlasting poverty, other criminals like murderers, kidnappers including young women are enjoying the fruits of their "trade" simply because the judiciary gives them token sentences or just set them free.

Any one can bleat all the froth on their mouth but if Amin was around he would shoot the whole bastards dead.

Then Ugandans would sleep at night without intruders in the "safety" of their homes. The leniency of the courts frustrates efforts of those not eaten by kawukumi in the police who successfully investigate cases just to be dismissed by courts.

The "all mighty" Director of Public Prosecution has even powers to "lose" interest in any case he likes including murders without giving any reasons.

Those who bleat about human rights not to kill murderers have never been victims because their loved ones were never "kilidi" or kidnapped with ransom demands. Perhaps they are beneficiaries of rampart criminality.
Report to administrator