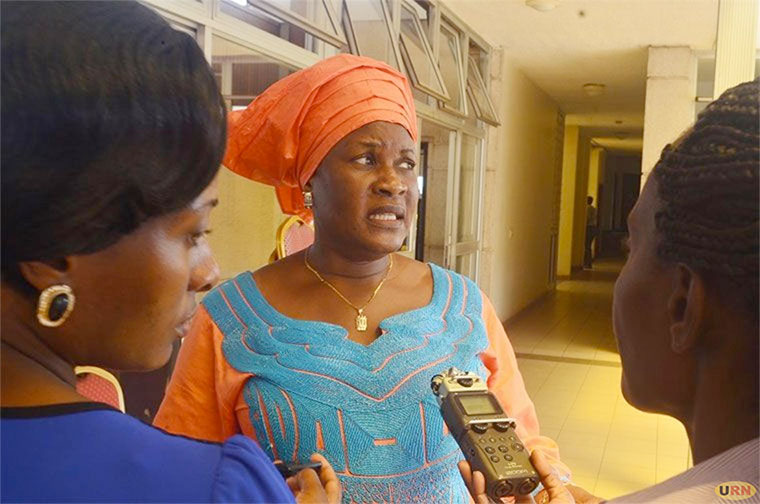 Two security guards have been deployed to guard Mbale Woman MP Connie Nakayenze Galiwango. The move follows death threats contained in a letter leaflet that was dropped at her residence in Butaleja cell, Masaba ward, in Mbale Municipality.

Initial reports indicated that unidentified people dropped a letter at her home on Thursday, demanding Shs 400 million, failure of which, she would be killed. According to the letter, the money was to be sent to a mobile phone number 0780723011 which is registered in the name of Moses Namisi.

However, Nakayenze told URN that she was hesitant on taking up the police officers whom they have deployed because the DPC has refused to return one of the officers who were guarding her previously.

She said that she has reported several cases to police with no action, and questions why the DPC is now dictating which officers should form part of her security detail. She fears that the police is being used by her political opponents to compromise her security.

Nakayenze says that unidentified people have been trailing her both in Kampala and Mbale since 2017 when she voted against a move to lift the cap on the presidential age from the Constitution.

Maybe she should simply step aside and spare herself the anxiety! Otherwise she should simply accept such threats as part of the game she has chosen to play!
Report to administrator
+1 #2 WADADA roger 2019-09-10 15:14
These very guards shall be used as a conduit to finish her, there is a very organised mafiarism in the police that is used to take down regime oposers.

Be that as it may, there are so many ways of hurting the MP, may be they should give security to her dogs, husband Galiwango and children.
Report to administrator
+1 #3 WADADA roger 2019-09-10 15:21
Nakayenze Connie is not a bad person, her crime is that she voted against a move to lift the cap on the presidential age from the Constitution and in so doing, she gained favour from both straight members of the NRM and the opposition, she is destined for a win, Lydia Wanyoto is a looser from the word go
Report to administrator
0 #4 karemire 2019-09-10 17:36
Quoting Concerned Ugandan:

Why should a popular politician be so terrified of the very people she is very eager to represent?!

Actually, the threat could as well come from sources other than from "the very people she is eager to represent" [your words]. We just do not know the details.
Report to administrator
0 #5 Akot 2019-09-10 19:51
Concerned Ugandan, agreed, but,

The best way to end all this dirty game is not to send to parliament mps again as they work for Museveni & not electorate!

Ugandans still need/want Museveni & when they will have enought of him, they will UNITE & show him way out! Until then, the outside world will go along with Ugandans' choice of president/chief tribal leader!

The tribalistic system ensures Museveni's place, while developed world won't say a word aganist him as the system Ugandans are alright with, goes against their Principles!
Report to administrator
0 #6 Lakwena 2019-09-11 09:37
Quoting WADADA roger:

Nakayenze Connie is not a bad person, her crime is that she voted against a move to lift the cap on the presidential age from the Constitution and in so doing, she gained favour from both straight members of the NRM and the opposition, she is destined for a win, Lydia Wanyoto is a looser from the word go

In other words "WADADA, Lydia Wanyoto is Chinese (fake). I know many Bagishu like Hon Mafabi for being strait and tough like a nail, but Wanyoto for all the wrong reasons, is annoyingly opportunistic, slimy and slippery like fish (fishy).

But Wadada, instead of playing the second fiddle like Wanyoto is doing, when will the Bagishu also send someone to our State House?
Report to administrator