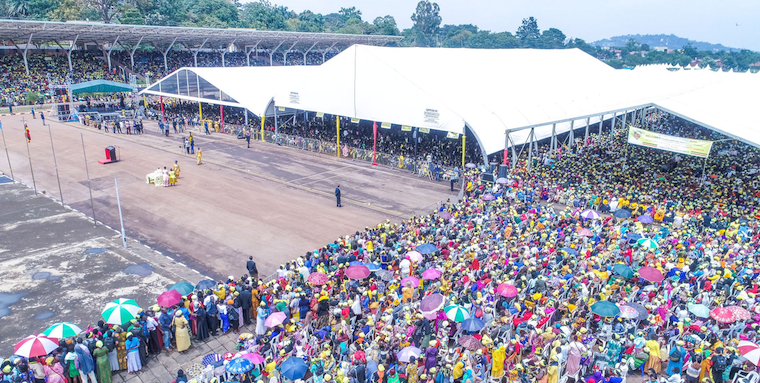 Some of the youth who turned up at Kololo

Kampala minister Beti Olive Namisango Kamya has told President Museveni that she has already delivered on her promise of turning Kampala into a support base for the National Resistance Movement (NRM) party.

Kamya was speaking during the graduation of 8,480 girls and women with various vocational skills under the Presidential Initiative for Skilling the Girl-Child. The event was held on Sunday afternoon at Kololo airstrip.

The programme is led by Lucy Nakyobe Mbonye, the State House comptroller. Last year, the president presided over the passing out 4,000. They are trained in vocational skills like tailoring, catering, weaving, carpet making, among others.

“When I pledged three years ago that I will deliver 85 per cent of Kampala to you [Museveni], some people laughed at me. But isn’t this 85 per cent,” Kamya said, referring to the youths seated in giant tents.

When she was appointed minister in 2016, Kamya pledged to turn Kampala into a strong support base for Museveni and NRM come 2021. Kampala traditionally votes against the incumbent and government officials have been on offensive in the last three years to turn the city into the ruling party’s stronghold.

Kamya said the president has now managed to reach everyone in Kampala and implored the graduands to vote peace in the next general elections in 2021.

Museveni faces a challenge from Kyadondo East MP Robert Kyagulanyi and there is a feeling among the government and ruling party officials that many youths might be attracted to him. Kamya has led the president to various youth groups around the city dolling out cash to them.

On his part, Museveni said he wanted each vocational profession to have a Sacco in each district. He would then go through these Sacco's to provide money for the youths being imparted with various vocational skills.

Instead of helping your exotic dancer (pole dancer) homosexual daughter, you are busy lying to the incompetent man, stop wasting your life and go deliver your daughter from the devil's hands.

What has her daughter's sexual orientation got to do with our national politics? You are completely OFFSIDE here. In deed this is a clear example of "garbage posting".
Report to administrator
+1 #12 rubangakene 2019-09-09 21:17
This graduation is nothing to "write home about"; you see, even before independence, skills such as tailoring, catering, weaving and so fort were passed from parents to daughters in-house by mother to daughter.

Now she is harping about it as if it is a new thing. If they hadn't messed up these institutions we wouldn't be masquerading like fools, and in a stadium moreover. Does the "hounorable" minister even know how to darn her smalls, I wonder!

How are these skills going to be put to use if we import everything cheaply from China?
Report to administrator
-1 #13 kabayekka 2019-09-09 22:12
Is this the Kampala international stadium of recent which was crying bankruptcy caused by its customers who owe it lots of rent arrears?

Well then if it is Kololo airstrip, one reckons the expensive rent that has been paid for this big ceremony for the day has been paid. And not paid by the tax payer for heavens sake.
Report to administrator
+1 #14 Lakwena 2019-09-10 07:45
In other words, Kamya's disillusion with FDC which turned into an illusion that somehow became true, by becoming a Minister in the NRM, could turn into a total madness.
Report to administrator
0 #15 Concerned Ugandan 2019-09-10 14:35
Ka-bambi!

Kamya the political prostitute thinks that a mere 8,000 desperate young women speak for the whole of Kampala!

I wonder what she will say when the results come back in 2021! Kampala has always been historically an opposition stronghold due to the higher number of enlightened persons unlike in the rural areas! It will take more than Kamya's cheap politicking to blind Kampalans!
Report to administrator
0 #16 Akot 2019-09-10 19:59
Quoting Wooden K.:

" Like the Kenyans , we are going to have to fight to extricate ourselves from Museveni`s paws"

Just bringing down the tribalistic system & UNITY is all that's needed to render Museveni LANDLESS, then Ugandans will go for the kind of governance they want!
Report to administrator
0 #17 Akot 2019-09-10 20:07
Quoting Wooden K.:

"The tragedy is that most Ugandans, especially NRM MPs have not realised that this country has been repackaged as a revised one party, Vicious dictatorship"

Ugandans MUST not vote again as long as Museveni rules, nor bring in parliament MPs again, as this will only be accepting, legalising their slavery in the
'Vicious dictatorship'!

This is why Ugandans MUST bing down the tribalistic system & UNITE or Museveni will go on destroying what he hasn't yet!

Ugandans MUST bring Museveni down in UNITY, so that he has no chance to continue using them against one another to just go on owning tax money, while impatient for oil to start flowing!

Why do Ugandans want/let Museveni to destroy them & their country completely?
Report to administrator
0 #19 Akot 2019-09-10 20:24
Isaac Nahale, understood, but,

As long as the tribalistic system stands, Musevnei is assured of coninuity as he controls every institution, including parliament/electoral commission!

Only Ugandans, in UNITY, have the power to say NO to Museveni & show him way out!

From which tribal land will Musevent figtht back from this time, which tribes will support another war that Museveni will lead & to free who from who?

The tomorrow Ugandans want lies in their hands but only if they go for it in UNITY as ONE PEOPLE, then when Museveni is out, Ugandans will decide; stay TOGETHER or go seperately tribally!

Uganda Churches helped Ugandans against Amin, but are they doing so with Museveni?

It's Ugandans being milked because the country if formed by their tribal lands & Musevnei has non in it!

Ugandans MUST stop Museveni before he draws them to next fake election that will only destroy Ugandans further, as it will be them giving chance to the demo to continue rigging & winning!

Even Sudanese we thought would be the last people to UNITE, did so!

What excuse do Ugandans have to not UNITE around mp Bobi Wine to ensure Museveni is OUT?

Why do Ugandans prefer being slaves of Museveni, to their FREEDOM in the country formed by their tribal lands in which Museveni has non, yet tribalistically divided & rules & will pass the legacy to his military son?

When will Ugandans wake up?
Report to administrator
12