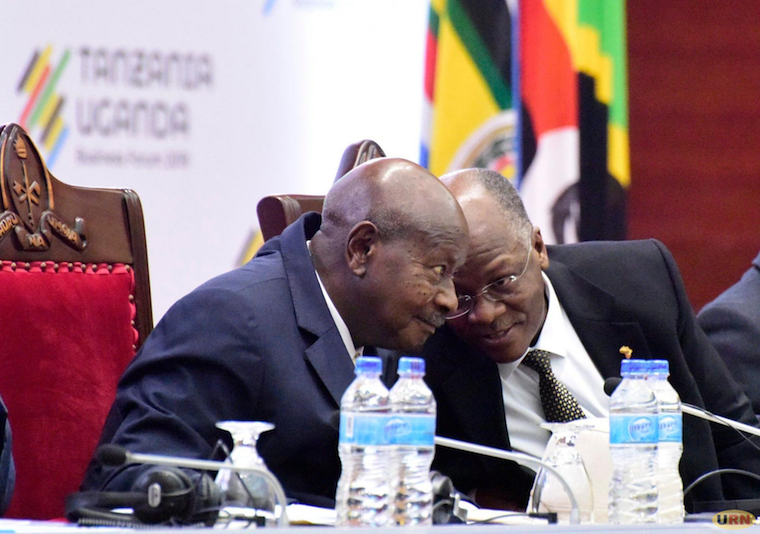 “We are late. We are still sleepy,” said Magufuli. He made it clear that Uganda should sacrifice some of the short-term gains for the long-term and the Uganda Revenue Authority officials should not delay the project for the benefit of a large population.

Plans to sign the much-awaited Final Investment Decision (FID), which is needed to unlock nearly $10 billion for the development of Uganda's Tilenga and Kingfisher oil projects, and the East African Crude Oil Pipeline came to an abrupt halt after Tullow Oil's failed to sell 21.5 per cent of its stake for $900 million to its partners - France’s Total E&P and China’s Cnooc – collapsed late last week.
At the heart of the dispute was the definition of the amount of money that Tullow Oil was to get from the transaction. Tullow Oil announced that out of the $900 million it would get from the sale of 21.5 per cent of its stake, $700 million would be reinvested in the development stage of Uganda’s oil industry as part of its share of the contribution.

Government, on the other hand, looked at the $700 million as an earning and, therefore, imposed a capital gains tax on it. This difference in opinion would stall the negotiations for a while.

"Actually we wanted the pipeline to be named Kaguta Pipeline when it opens,” Magufuli said, drawing laughter.

Uganda chose Tanzania port of Tanga over Kenya for its pipeline route in 2015. Since then, government have been in negotiations with oil companies, asked partner countries to buy a stake in the project but also finalise agreements with Tanzania as a host government for pipeline.

Following the collapse of the oil deal, Total E&P and Cnooc suspended all activities and tenders on the East Africa Crude Oil Pipeline until further notice. Magufuli told Museveni that if he needed to move forward, he has to “sacrifice short term gain and go for long term gold.”

“Let us do the pipeline and create jobs,” said Magufuli. He added that in order to reach a FID, it is crucial that key project documentation, such as the Host Government Agreements and Shareholders Agreement for the EACOP project, are finalised and put in place.

The pipeline between Uganda and Tanzania will be the longest heated oil pipeline in the world at 1, 445km. Uganda chose Tanzania because it wanted to speed up the process to get the project done. It was envisaged that Tanzania didn’t have land compensation issues that Kenya had which delay the project.

But now, it seems Uganda is delaying her own project as it tries to extract more taxes from the oil companies. Uganda was supposed to start oil production in 2020. That target date has been moved to 2023. The country has up to an estimated 1.4 to 1.7 billion barrels of recoverable oil from the 6.5 billion barrels confirmed in the country.

What do Tanzanians who are not tribalists, have began path to real democracy, think about their president associating with the most inhuman dictator who tribalistically divided & rules Uganda & will do so for yet another +30 years?

Magufuli forgets his country refused to give Museveni documanatations to allow him to live there because Tanzania saw through the demon & didn't want him in the country, just like Kenya did!

Not even Kagame, rwandese like Museveni, wants the demon back home becaus he knows how dangerous Museveni is!

Is Magufuli ensuring Museveni gives him a share of money from Uganda oil?

Why are African rulers so useless, so curel & spit on the people so openly?
Report to administrator
-2 #2 kabayekka 2019-09-08 19:59
Well if Uganda did not want to use Kenya because it did not want to compensate the African land ownership system of Kenya, what then is the difference with using the territory of Tanzania.

Tanzania is going to charge Uganda for using its territory for putting up the pipeline of about 1,000 Kilometres until Uganda has finished all its oil from the Western Rift Valley.

Because it is now clear to most citizens of Uganda that Uganda has no technology and the ability to refine crude oil for the next 30 to 50 years.
Report to administrator
-1 #3 kabayekka 2019-09-08 20:30
With the global environment pressure the Friends of Earth are putting to African leaders like these ones, their citizens should be better informed.

At the current price of crude oil being 66.83 dollars the marketing of crude oil from the centre of Africa all the way to the countries that know best how to refine crude oil and use it for their many industries, Uganda's benefit is about 6 to 16 dollars per barrel of crude oil. These expensive countries are over 7000 Kilometres away!
Report to administrator
+2 #4 Wainainchi 2019-09-09 00:57
This Tullow Oil is No.1 Uganda Enemy. Itvis equal to infamous bank robber Dillinger from America who was robbing American banks in a daring way in broad daylight.

If you never read about John Dillinger please do it now and you will see his offspring Tullow Oil.

I have been writing and writing about this gangster Uganda ripping off company which was sent to Uganda not for Uganda but for enemies of Uganda who were dreaming of pumping Uganda oil for free.

Sonething like America and UK are doing in Iraq and Lybia.Modern pirates and beocolonialists People of Africa wake up and chase those thugs.

Put their names on shame list so that future generations will know who made their parents and grandparents suffer.Peole of Uganda raise up and chase away those monster Tullow oil gangsters.
Report to administrator
0 #5 kirya 2019-09-09 04:09
m7 wants the tax money to give away to his supporters and influence the forth coming election.

Greed m7 let oher rule Uganda.
Report to administrator
+1 #6 WADADA roger 2019-09-09 11:13
Tell him, he keeps reminding Ugandan with phrases like my oil, may be that is why he has refused to go
Report to administrator
+1 #7 ed@yahoo.com 2019-09-09 14:53
You must be joking. The greed don by him and his kinsmen has never been witnessed anywhere before anywhere on earth.

They are beyond greedy, they were beyond needy. It's in their genes to be greedy, so, you are wasting your energy and words Mr Magafuli. we Ugandans are stuck with a group of extremely greedy and brutal people hell bent of messing up our Country before fleeing back to theirs.
Report to administrator
0 #8 rubangakene 2019-09-09 21:35
Once a "milkman", you try and squeeze from every cow even if they no longer have milk, you are on your stool looking at the "mabere" only, not the bigger picture.

These companies like Tullow et al have realised that Ugandans are milkmen so they have also been milking together and coming back to the same cow year in year out.

Can you imagine the chaos and "kavuuyo" when the real oil starts flowing and hits the international market?
Report to administrator
0 #9 muzei 2019-09-11 16:51
Who is stopping Magufuli and Museveni from building the pipeline?

Oil ultimately belongs to Ugandans. It is naive to believe the tax dispute is the cause of the delay.

I can tell you for certain if M7 said to them, 'come, pay no tax...let's start building..' they would still find other excuses/assurances.

Truth is, what they are engaged in is land holding/speculation. They may or may not commit in the future, (probably sell for profit).

Ugandans, (young population) however need this oil streaming like yesterday. The plan to team up with Kenya looks like the best option. It would unlock African resources to develop the pipeline...then oil companies will come running in!
Report to administrator