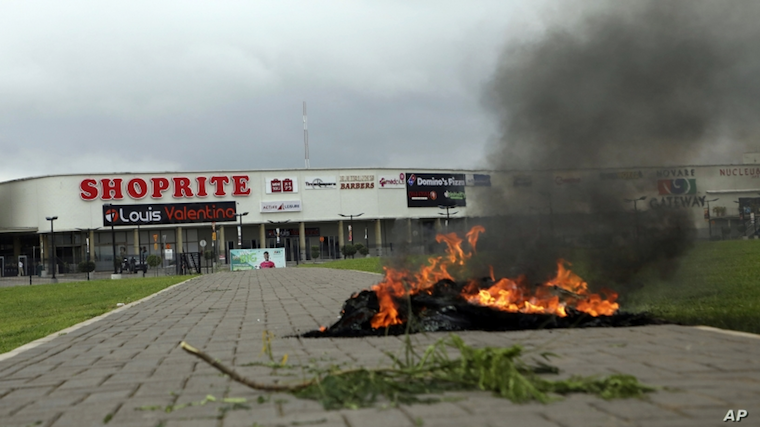 South African-owned businesses operating in Nigeria are being targeted with violence in retaliation for xenophobic attacks carried out against Africans working in South Africa.

Police in South African arrested more than 290 people in five areas impacted by days of violence in Johannesburg and Pretoria. Amid a growing outcry about the attacks on many Nigerians living in South Africa, youths took to the streets Tuesday evening in some Nigerian cities to attack South African owned businesses.

The offices of South Africa telecommunications giant MTN in the southwest city of Ibadan were set ablaze Tuesday while the company's office in Uyo in the southeast was attacked by an angry crowd that vandalized properties, according to local newspaper reports.

Shattered glass, tires and damaged printers lay in the vandalized MTN shops in the Surulere neighborhood of Lagos, which on Wednesday had police vans outside.

“They broke into the shop, carrying laptops and many other things away,” Bala Muhammed told The Associated Press.

"I had to close my kiosk because I was afraid because some people will use the opportunity to come steal. It has happened before as they are lots of people you won't know who to hold responsible.''

The Lagos outlet of South African clothing retailer PEP in Surulere was also attacked and looted.

“The crowd surged and within a few minutes the shop was empty,” Stephen Obafemi told AP.

The Lagos State Government in a press statement Wednesday confirmed that two outlets of the South African supermarket chain Shoprite were attacked in Lagos.

“These attacks are condemned as they are against the Nigerian spirit of accommodation and benevolence that the country in general and Lagos State in particular is noted for,” Lagos state commissioner for Information and Strategy Gbenga Omotoso said in a statement.

Many South African owned businesses in parts of the country are now under police protection. Nigeria and South Africa are Africa's largest economies. Nigeria has a large immigrant community in South Africa while South Africa has huge business interests in Nigeria. These include telecommunications, banking, energy, hotel and media.

Years of xenophobic attacks on Nigerians living in South Africa has led to growing sentiments against South African companies doing business in Nigeria, with many Nigerians calling for their closure.

Nigerian President Muhammadu Buhari said he had dispatched a Special Envoy to South Africa to convey his concerns to President Ramaphosa.

With anti-immigrant violence sweeping parts of South Africa, Nigeria on Wednesday urged its citizens to refrain from vengeance – even as at least two major South African-owned companies have suspended some operations there because of attacks.

In a Twitter post, the information ministry for Nigeria – the continent’s biggest economy – said the federal government “has appealed to Nigerians not to attack South African companies operating in Nigeria in retaliation for the ongoing xenophobic attacks against Nigerians in South Africa.”

But days of looting and attacks on South African businesses believed owned by foreigners have had a ripple effect. The South African grocery chain Shoprite Holdings said some stores operating in its domestic market, as well as in Nigeria and Zambia, have been closed following attacks, Reuters news service reported Wednesday.

And the South African telecom operator MTN shuttered stores in Nigeria following attacks in several cities there, citing safety concerns for customers and staff. Vandals damaged its offices in the southeastern city of Uyo and set fire to MTN property in the southwest city of Ibadan on Tuesday, according to the Associated Press.

At an MTN kiosk in Lagos, “they broke into the shop, carrying laptops and many other things away,” Bala Muhammed told the AP.

A Twitter post attributed to chief executive Ferdi Moolman said MTN Nigeria seeks “to connect people, bring people together and provide a platform for everyone’s voice to be heard. …”

South African police have reported at least five people killed amid rioting and protests against the employment of foreigners. Highways have been blockaded and vehicles bombed with petrol. In downtown Johannesburg, a Nigerian man surveyed the shattered windows of his car dealership.

He told police at the scene that he has a staff of 10.

“They are all South African. It is just me alone, and my partner that is in Nigeria,” who are foreigners, said the man, who did not disclose his name to VOA. “We came to create jobs for them. We are not, like, stealing jobs from them. We are creating!”

South African President Ramaphosa has urged the country’s residents to stop attacking foreigners and vandalizing businesses. In a tweet posted Tuesday, he said he was “convening the ministers in the security cluster today to make sure that we keep a close eye on these acts of wanton violence and find ways of stopping them.”

With attacks continuing, Nigeria has joined Rwanda, Malawi and the Democratic Republic of Congo in declining to send delegations to the World Economic Forum on Africa, which opened Wednesday in Cape Town. Nigerian President Muhammadu Buhari reportedly has sent a representative to South Africa to address concerns.

Widespread dissatisfaction with dire socioeconomic conditions in South Africa – where more than half the population lives in poverty and unemployment tops 27% – have made foreigners easy targets for local people’s anger and frustration, some analysts and rights groups say.

But the attacks harm South Africans, too, said Lizette Lancaster of the Pretoria-based Institute for Security Studies.

“Many of the shops that have been looted are rented [by foreigners] from South Africans. So the real victims here are not just migrants from other countries in Africa, but our own people,” she said.

Lancaster, a manager with the institute’s justice and violence prevention program, called for “addressing the narratives about foreigners committing crime, as well as that they are taking businesses away, because it’s not the truth.”

0 #1 kabayekka 2019-09-05 09:35
This sends a clear message to the African leaders who have named themselves as the saviours of the continent of Africa.

The modern world needs to solve the problems of unemployment and social deprivation for so many African people.

To think that by tear gassing and beating the African people left, right and centre will put them back in their miserable place is wrong. The days of rule by the AK 47 are long gone.
Report to administrator
+2 #2 katende martin 1 2019-09-05 09:55
I think the primary cause to this very inhuman act is poverty and low levels of education. South African citizens are forced to blame foreigners for their state of poverty which is not true.

It's their lack of creativity and hardwork which is pushing them to diminishing ends but unfortunately they have chosen a path of no return, killing fellow black men for either sport or making a point.

South Africans should be taught value of humanity and should also be immensely educated to eradicate their primitive character but first they should be taught that Africa as a community will take us to unexpected heights.

Take a look at Europe, a person is eligible to move, settle and also start a business in any European state and Europe is very strong in whatever aspect due to search arrangement.

So what South Africans have resorted to is way too destructive and dehumanising than Racism. By the way, where is African Union in all this...
Report to administrator
+1 #3 juwait kali 2019-09-05 10:44
South African president has to resign considering how this has gone on under his watch.

Africa is moving towards boarder less trading and then this is left to go on unchecked? The president and Parliamentalians go back to their castles for bread and butter whilst this continues on yearly, monthly, weekly, and daily basis?
Report to administrator
0 #4 Lakwena 2019-09-05 11:00
In other words, the South Africans have goofed and as a result paying a higher price. But an eye for an eye makes the world blind.

I can only imagine the losses/looting is Shoprite and MTN outlet. And I could only imagine the losses, if Ugandan had joined the outrage revange and descended into Shoprite Supermarket and MTN service centers.
Report to administrator
0 #5 Winnie 2019-09-05 22:07
Lakwena, you are the same person advocating for violent expulsiob of Ugandan Asians. Now you are moralizing. About what?

I told you that discrimination and stereotyping is wrong. You and your fellow thugs told me to go hang. But one week later, you have become the victim of what you were supporting.

I told you that Ugandans also live in other countries. Their safety depends on how we treat others. You scoffed. Please, say nothing about events in South Africa. You are not fit.
Report to administrator