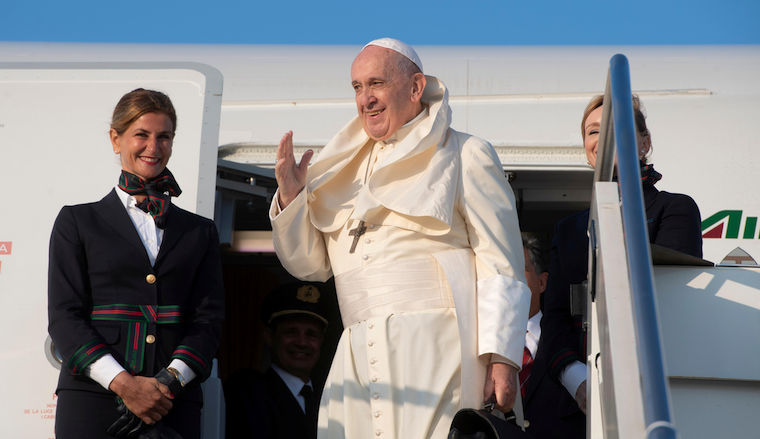 Pope Francis boards the airplane as he departs Fiumicino Airport to begin his visit to the African nations of Mozambique, Madagascar and Mauritius, in Rome, Italy

Peace is the pontiff's main message as he embarks on his three-nation Africa tour Wednesday, starting in Mozambique's capital, Maputo.

In a recorded message ahead of his arrival, Pope Francis addressed Mozambicans in the nation's dominant language, Portuguese.

"I cannot wait to meet you," he said. "You are all in my prayers. I invite you all to join in my prayer that the God and Father of all may bring about fraternal reconciliation in Mozambique and throughout Africa, which is the only hope for a solid and lasting peace."

That's a powerful message, Mozambicans say, especially in the wake of a recent peace agreement that aimed to bring an end to decades of violence that followed a brutal 16-year civil war.

However, cracks are beginning to appear in the fragile deal, with members of the opposition Renamo party accusing members of the ruling Frelimo party of attacking their members in rural Mozambique. The two parties were the main combatants in the civil war.

On his three-day visit, the pope will meet with lawmakers, youth and clergy. Father Giorgio Ferretti, parish priest of the Cathedral of Maputo, says he also expects the pontiff to address other major challenges that Mozambique faces.

After Mozambique, the pope will continue to the island nations of Madagascar and Mauritius. The pope also sent video messages to them. He spoke in Italian to Mauritians, who speak English, French, Creole and Hindi; and to the Malagasy people, who speak French and Malagasy.

That's because, he said, the language of the Gospel is love.