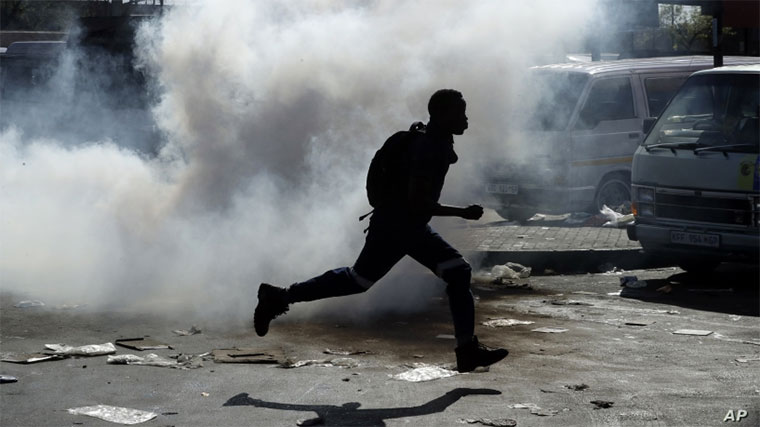 A man runs away from tear gas after making off with goods from a store in Germiston, east of Johannesburg, South Africa, September 3

"We are a country that is completely committed against xenophobia," President Cyril Ramaphosa said in a video statement published Tuesday on Twitter. "We do not allow and cannot tolerate attacks on people from other African countries."

Police fanned out across neighbourhoods in Johannesburg and Pretoria as the violence extended into a third day in South Africa. Police have arrested more than 90 people in five areas impacted by the violence. Many gutted, emptied shops remained closed as shop owners, many of them foreign, feared returning to their property.

"There is no justification whatsoever for people who have a sense that their jobs are being taken by people from foreign lands to attack them, to destroy properties and actually to kill them," said Ramaphosa. "This must be stopped."

VOA's Darren Taylor is in Johannesburg and saw up close the level of destruction and violence in the city.

"In the areas, I visited where the violence happened today, there are rocks, smouldering car tires everywhere. Everywhere, you see shell casings from police firearms. In the city this morning, there was a dead body of a woman. There were burned-out cars and buses, " Taylor said.

The Ethiopian Embassy in South Africa advised citizens to close their shops "until peace is restored," according to Ethiopian media, and Zambia's Ministry of Transport and Communications warned Zambian truck drivers not to travel into the country.

In a statement, Nigerian President Muhammadu Buhari says he has "deep concern" regarding the reported attacks on Nigerian citizens and property in South Africa since August 29.

Consequently, Buhari has dispatched a special envoy to South Africa to convey his concerns to Ramaphosa. Buhari's office said he has also instructed the Minister of Foreign Affairs, Geoffrey Onyeama, to summon the South African high commissioner to Nigeria and get a briefing on the situation, express Nigeria's displeasure over the treatment of its citizens, and to get assurances of the safety of their lives and property.

Lizette Lancaster at the Institute of Security Studies says the narrative around foreigners taking jobs and resources has been created by politicians.

"The real victims are our own people. And we really need to start addressing the narratives about foreigners committing crimes, as well as that they are taking businesses away, because that’s really not the truth. If we look at the research, they actually create jobs, and there are lots of positives stemming from having migrants in our society,” she said.

That sentiment seems to be shared across the continent. Godwin Adama, Nigeria's consul-general in South Africa said the South African government needs to do more to change perceptions about foreigners, especially those from other African countries.

“It is condemnable. Not very encouraging. I’ve seen criminals have taken advantage of the situation to loot and destroy properties of foreigners in South Africa. Truth of it is, there’s some perceptions of foreigners taking jobs. That’s why foreigners are being attacked.”

VOA's Taylor said it's clear that when mob mentality takes over, it's not only foreigners who fall victim to the violence.

"I don't think, despite what the government says, there can be any doubt that foreigners are being targeted. But from what I've seen, there's definitely criminals that hijack the situation and take advantage and start looting. And they really don't care who they steal from, whether it's foreigners or not," he said.

They are out to destroy and exploit the young independent country. That is what is happening now. Looting and raping the country of it's resources.
Report to administrator
0 #2 juwait kali 2019-09-04 21:09
Why is it taking this long???? African politicians honestly. Didn't Nigeria contribute to the liberation of that country?

Should Africans in return be the ones to die instead of the apartheid people who created this enequality poverty in the first place and should sort out this mess?? How can we deny that we are not what they call black Africans.
Report to administrator
0 #3 David Kayumba 2019-09-04 23:21
This is not xenophobia, it is Genocide. It is clear some leaders in South Africa are behind it.

Police has acted in complicity with the genocide masses. People are cutting off the heads and walk with them in Broadway liglight.

This ungrateful country could have easily sent all foreigners out without killing any. The best the continent can do now is to totally isolate south african businesses: shoprite, MTN and others
Report to administrator
0 #4 Webz 2019-09-05 13:57
Who bewitched Africans? By the time South Africa got out of the apartheid perpetrators the country was booming economically.

It's now contracting gradually, not even the best on the Africa level. Now see what foolish Africans are doing: victimizing each other for no cause. There is totally nothing wrong for someone to migrate to another country for investment purposes.

All the African countries at the time of independence were booming economically. Several years down the road after independence Africans, Uganda on the forefront, are dying of poverty. Let South Africa follow in the footsteps.
Report to administrator