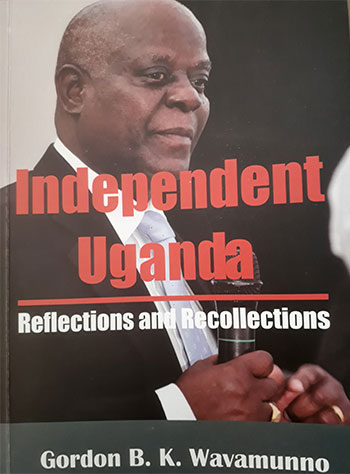 In his long, winding road to business success, Prof Gordon Wavamuno took risky paths, had a couple of stumbles and learnt lessons he shares in his 2018 book; Independent Uganda: Reflections and Recollections.

In his 138-page book, Wavamuno, a prominent businessman and philanthropist, tries to analyse the hurdles of doing business in agriculture as candidly as possible.

He says lack of a serious domestic market and a restrictive foreign market have made local investors in expensive agro projects like flowers, ginger, and vanilla and red pepper growing live in grief.

He says at one time flowers were all the rage in Uganda, which swayed a few Ugandans who could afford the heavy investments to establish large flower farms only to be disappointed. In this two-part series, compiled by Joseph Bahingwire, Wanamunno shares his business experiences.

I too was attracted to flower farming and I started Victoria Flowers on the shores of Lake Nalubaale, a stoneís throw away from Entebbe International Airport. I believed that everything had been stitched together properly. The infrastructure was excellent.

I had experts from Israel and I put in the money to make sure that everything worked properly. Given the propaganda issuing from many quarters, we the indigenous African flower farmers believed that this is now our moment to make money almost effortlessly. Many Ugandan Africans who went into flower farming went into grief. I can mention the late Dr Samson Kisekka (former vice president), Mr Paul Kagimu, Dr Mwesiga and others.

Most of us went into the flower growing business without fully appreciating the flower cartels we were up against dominated by Europeans who made our entry into the flower market hell. At any time they would raise the phytosanitary factors to remove us from their markets. It is also important for our products to have a sound base in the local market.

Ugandan Africans have largely no flower culture and the domestic consumption of flowers is negligible. And this lack of a substantive domestic market has led to the failure of many agricultural products such as ginger, vanilla, red pepper. For all these products we have to depend on the tender mercies of foreign markets where more often than not we have no competitive advantage.

There has also been lack of commercialisation activity in our embassies abroad. Government should ensure that our products get the necessary support abroad. Without this support, we are often shortchanged and destroyed in these foreign markets.

Where the flower industry has flourished in Africa, the ownership is either foreign or of documentary citizens of European, Chinese or Indian extraction.

I believe there is need to strengthen our market research so that what we produce we can sell. Economic activities are not a fashion ñ so that at one moment it is fashionable to grow one crop or the other or to carry out any economic activity.

Since 1962 there has been continuity and change in the economy of Uganda. As we noted earlier, the pillars of the colonial economy were cotton and coffee. Cotton was completely dominated by the indigenous African production right from 1904.

Coffee was a white planters' crop grown on big plantations until their plantations failed in the early 1920s. Africans began to grow coffee on their small shambas and by 1930 they began to dominate coffee production as well. Coffee overtook cotton as the major revenue earner in the 1950s and coffee is still the mainstay of our economy. Cotton has been declining since the early 1970s and has not recovered yet.

Over the years, there has been an effort to diversify the economy in the field of agriculture, sugar production has been important since early 1920s. The sugar industry is dominated by Indian capitalists mainly the Madhvani and Metha families. Other Asians operating in Busoga have lately become involved in sugar production.

Busoga Africans are being involved in sugar cultivation to supply the Asian-owned sugar factories. Sugar enriches the owners of the factories and impoverishes those that actually grow it in the field on small family plots.

In the long run Busoga Africans may become the most impoverished citizens of Uganda because of what sugar does to those who labour in the field. The best land is being used for sugar production and food production is being relegated to the peripheral lands.

As I write, Metha wants to expand sugar production to what is left of the Mabira forest and is being supported by the government but they are being resisted by the people.

In Acholi, Madhvani wants to develop the region by taking the land from Acholi and turn it into a large sugar plantation. Government, which sees agricultural development in terms of large plantations, is supporting the Madhvani venture but the Acholi have been resistant though they seem to be losing out to the big capitalists.

After twenty years of war, the Acholi need to settle down on their land and map out the future from there but Madhvani is knocking vigorously to take their land. He is itching to turn them into labourers and squatters on ëhisí land.

Tea originally grown on big plantations by Europeans and Asians in Buganda has now spread to western Uganda especially Ankole and Kigezi and is now being grown by Ugandan African capitalists. It has become a major crop in our economy and it is an industry the Ugandan Africans may eventually dominate.

The much-maligned tobacco was an important crop during the colonial period in Bunyoro and West Nile. It is declining and BAT has largely pulled out of the industry. The future of tobacco in Uganda is, therefore, uncertain.

A lot has been said about Uganda becoming the breadbasket of East Africa. We have fertile soils, lots of water and a mild climate. At the moment Uganda is self-sufficient in food. Uganda is the leading grower of plantains/ bananas in the region and its greatest consumer. We consume almost all the plantain (matoke) we grow internally. There have been efforts to turn plantains into powder for export, especially to the Ugandan diaspora but not much has been achieved.

We have one very big lake, the second-largest freshwater lake in the world, Lake Nalubaale (Victoria), and several other small lakes from where we get fish for the domestic market and for the last twenty years, for export.

Yields have been declining precipitously as greed has led to overfishing and catching of immature fish, the destruction of fish breeding grounds and the poisoning of our water bodies especially Lake Nalubaale by flower and palm growers whose farms' chemicals and other effluent get into the lake and critical fish breeding grounds on the shores of the lake.

In the goodness of time, the much-venerated investors will hand Uganda dead lakes. Already our fishing communities are feeling the pinch as the fish stocks continue to decline.

Sir Andrew Cohen, way back in the early 1950s had established the corporatist model. The Uganda Development Corporation (UDC), which he established in 1952, had in a few years become the engine of Ugandaís economy spearheading mainly the industrialisation of the country. It was a government-private partnership arrangement and many companies in mining, agriculture, manufacturing, fisheries, etc. were established and worked under the umbrella UDC.

When former president Idi Amin declared the economic war in 1972, UDC, which depended partly on foreign participation, fell apart. Since the early 1980s various governments have tried to revive UDC without success.

Our country has the potential to industrialise; we have the grade iron ore in Muko, Kigezi. We can generate a lot more electricity at present, if we go into mini hydroelectric stations. There are many rivers that we can dam and generate electricity in many places all over the country.

Once upon a time, copper was a major item of our economy. We refined it in Jinja and we transported it by rail from Kilembe mines to Jinja to the refinery. The Indian capitalists Madhvani in Jinja had gone into iron and steel production and Metha into machine tools and cable industry at Lugazi.

There was a vibrant textile industry in Jinja, Nyanza textile Industries and a textile company label (East Africa ) marketing our textile all over East Africa under UDC umbrella. It was our own cotton, which fed the textile mills.

As you will have noticed, I am saying there was this, there was the other. Normal countries build on what they have. They do not destroy what they have to build the same infrastructures all over again. Not Uganda!

The last fifty or so years have seen a lot of demolitions as politicians fight for power and as policies change drastically from one regime to another. It is now high time that as a country whatever regime comes along, must agree on the basic national interests and even sacred cows that cannot be tampered with.

In our next issue, Prof Wavamuno explains why corruption is flourishing unabated as well as increasing unemployment levels especially among the youth.

Whether a rich Ugandan goes to settle temporarily in Europe or Asia, notwithstanding his billions of dollars, no one country will sell an inch of their land to this Ugandan- whether that be Kaguta Museveni or Kutesa.

I only see flames in the air the day Museveni falls down in the bossom of oblivion to the joy of oppressed, deprived and eslaved Ugandans.

Once a dog that had long been locked in cage gets its freedom, it will try every means necessary to restore its basic needs- whether that implicates biting people it gets on its way to death- and that is what Ugandans will do tomorrow.

Those playing with fire will get what they deserve. Do not forget that you will get roasted in the very fire you lit.
Report to administrator
0 #2 rubangakene 2019-09-04 21:23
I have not read this 138 essay/composition. Business people here fall headlong (KAVUUYO) into ventures they have't a clue about.

You need to carry out extensive research/feasibility studies and so forth, e.g. quality control versus quantity, presentation, market identification.

For example; Ask yourself if you want to produce fresh fruits for ready consumption or to be processed as juice. Ugandans also expect 'quick gains' by using excessive chemical fertilisers. Finally they do not like re-investing the small profit into the business at hand.
Report to administrator