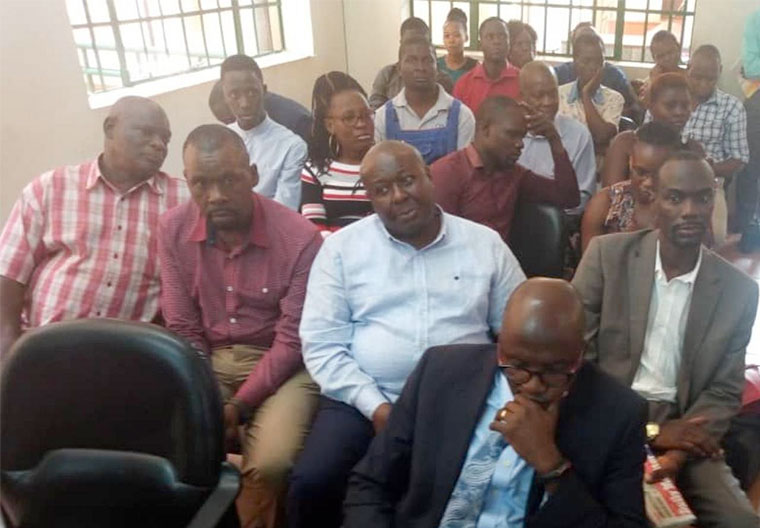 He was jointly dragged to the Commercial Division of High court together with dfcu bank and Kabiito Kenneth Karamagi in 2008. The two accused dfcu of selling off their property worth Shs 1.4 billion to Kirumira at only Shs 300 million.

The couple had mortgaged the school for a loan of Shs 460 million. However, court documents show that the couple only received Shs 315 million between May 2005 and May 2006. Dfcu was faulted for having connived with Karamagi who acted as the receiver and Kirumira to declare the school a residential and undeveloped property.

However, Karamagi told court that there was a valuation report, which showed that the property in question was valued at Shs 550 million but was instead forced to sell it at Shs 300. In her judgment read by the commercial court registrar, Lillian Buchana on Monday, Justice Elizabeth Jane Alividza noted that although the process leading to the sale of the property was okay, it was marred with lack of transparency and undervaluing of the property.

She also noted that the testimony of Kirumira concerning the takeover of the school contradicted that of other witnesses. Kirumira reportedly stated that he took over the school on December 10, 2007 after Karamagi took him to the area chairperson. He explained that shortly after he sent his guards to guard the property.

However, this contradicted Karamagi’s testimony who said he was never involved in the takeover of the school. Evidence before court also shows that Kirumira took over the school on January 1, 2008. Justice Alividza said the applicants lost their school, saying it is now impossible to restore them to their previous status.

She, therefore, ruled that they are entitled to the difference between undervaluing and the best price of the suit property.

“If the defendants (respondents) had exercised reasonable care they would have got the best price," said Alividza.

“Court also awards compensation of loss of property taken over by the 3rd defendant (Kirumira). The decision has revealed high handedness acts of the 3rd defendant. He lied to court about his previous association with the plaintiffs. He took advantage of them and eventually their property, reads the Judgment in part.

Why are Ugandans leaving Museveni FREE in Peace while fighting one another, thus helping him own the country formed by their tribal lands & be his family slaves for good?

Ugandans & British believe they won't survive without Museveni/Brussels & both are perfect in fighting one another, won't give chance to 1 of their own to lead them by just supporting him/her!

British don't respect result of their own democracy, Ugandans don't even know the country is fromed by their tribal lands & Museveni has non in it!

Yet, just UNITY of British & Ugandans would end all meaningless wrangling & give a real start to ensure the 2 nations's INDEPENDENT future!

No one respects British/Ugandans any more, both are brushed OFF as people of no importance!
Report to administrator
0 #2 WADADA roger 2019-09-03 23:00
Good decision but a bad prescendent, I dont see why the court decided to push Godfrey Kirumira to compensate Stephen Sendagire and his wife, Gladys Nannyombi over matter relating to Bright Future vocational senior secondary school .

Whether there was fraud or not, i think Court.should have pushed the burden to DFCU and Kabiito Kenneth Karamagi, am imagining that Kirumira only secured the school after a competitive bidding process, Kabiito as the official receiver should have known the price below which the bank could not sell, i dont think evidence was led to show connivance or fraud or the part of Kirumira.
Report to administrator
0 #3 WADADA roger 2019-09-03 23:02
But when all is said and done, the decision should send a warning to the banks to stop the habit of selling Clients property at below price and then continue demanding for balance, am glad even DFCU faced the wrath, may be next time they will guide the receivers to be more conscious and give them a lower limit price
Report to administrator