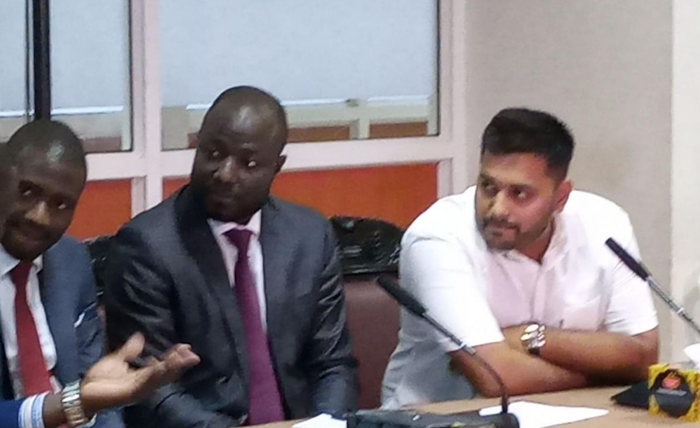 The Land Commission of Inquiry has commenced fresh investigations into the finances of Jinja West member of parliament, Moses Grace Balyeku and his business associate Thummar Jay Magnalal Patel.

The duo faces investigations for allegedly engineering a string of forgeries, fraud, irregularities, and corruption in the land transaction involving Plot 24 B Kyabazinga Way in Nalufenya near the Nile bridge in Jinja Municipality.

They were implicated for being responsible for the transaction that has since been proven fraudulent by testimonies of members of Jinja District Land Board, Jinja district land officials as well as ministry of Land officials in various public hearings conducted by the Commission of Inquiry into land matters.

The justice Catherine Bamugemereire led commission is investigating criminal activities associated with the transactions, corruption, and fraud which led to the issuance of a freehold land title over the subsisting lease of Jinja Municipal Council. Today Monday, Bamugemereire ordered the two business partners; Patel and Balyeku to supply the commission with all their bank account details.
Bamugemereire said the Commission requires the account details to aid investigation into the source of the Shs 2.4 billion which Balyeku said he used in settling interests of ten individuals who also held titles over the said piece of land.
On Thursday last week, Balyeku said he drew the Shs 2.4 billion from his accounts to settle interests of the individuals for the land so that his partner Patel could use for building a world-class shopping mall befitting of the new city status of Jinja.

"What if it is found that actually, first of all, you [Patel] paid Shs 500m to him [Balyeku] as a downpayment for him to start the entire process and then you’re purported to have got into some sort of loan arrangement of Shs 2bn. You’re going to give us lists of your accounts and account names and we’re also going to look at Hon Balyeku," said Bamugemereire.

"You know it is very unusual for a Ugandan to have Shs 2.4bn to play around [with], particularly when they have an election coming. So we’re going to find out. Where did he get this money which he has been throwing around, even sharing with all the witnesses that he meets," she added.

The Commission was prompted to order the probe after Patel denied transferring Shs 500m to MP Balyeku to facilitate the acquisition of the piece of land. Two investors are fighting over ownership of the land after Tirupati Development Uganda Limited petitioned the Commission of Inquiry to probe how it got defrauded of the land after securing a 25-year lease from Jinja Municipal Council at Shs 55 million for the construction of a public recreation park on October 31, 2007.

The investigations commenced after Patel went to clear the site for construction of the shopping mall last month. Since then, several witnesses have testified including Eric Joseph Sakwa, the Jinja resident district commissioner, chairperson Jinja District Land Board Innocent Ndiiko Ngobi and Robert Opiyo, the acting commissioner land registration in the ministry of Lands among others.

The land in question, measuring 12.5 acres initially belonged to Jinja Municipality having acquired it from Uganda Land Commission in 2001.
However, controversy broke up after a group of individuals acquired titles over the same piece of land in 2018, allegedly with consent from both Jinja Municipal Council and Jinja District Land Board.
PATEL DISTANCES SELF
28-year-old Patel told the Commission that he had nothing to do with the transaction and was very surprised to receive a photocopy of the freehold land title last month, delivered to him by an assistant of Balyeku.

“My Lord, up to now I haven’t seen the title. I only have a photocopy of the title. And the only thing I did was sign the application form. That’s it.” he said.

Patel also dismissed a claim by Balyeku that the matter had been referred to State Minister for Investment and Privatization Evelyn Anite and Lands minister Betty Amongi Ongom by President Yoweri Museveni during a meeting between him and the president recently.

Patel told the Commission that he does not remember discussing the Kyabazinga Way land with the President.

"I knew nothing about the various alleged frauds, forgeries, and irregularities which led to the award of a freehold title in my name. And I never paid a coin towards the title neither did I give MP Balyeku money to undertake the process” he explained as MP Balyeku who was present listened attentively.

Asked whether he will challenge cancellation of the title which he never applied or paid for, Patel said he prefers to negotiate with those having interests in the land since he is still interested in building a shopping mall in the disputed area.

Patel was questioned by deputy lead counsel John Bosco Suuza before commissioners probed him further for his role in the transfer of the public land to a freehold last year. The freehold title was issued on August 2.

0 #1 WADADA rogers 2019-09-03 08:19
Its a game, at the end of it, Balyeku and partner will continue using the land as they wish, that commission is not a court and Balyeku does not have just one bank account, the commission gets it wrong when they send him to bring details of his bank account, its shallow reasoning.
Report to administrator
0 #2 rubangakene 2019-09-03 20:50
If said defaulters continue to use the land as they wish, then what's the point of the commission.

We must stop this blatant impotence of the commission to penalise defaulters, a complete waste of public funds, pointing what we already know exists under CORRUPTION UGANDA INCORPORATED!
Report to administrator