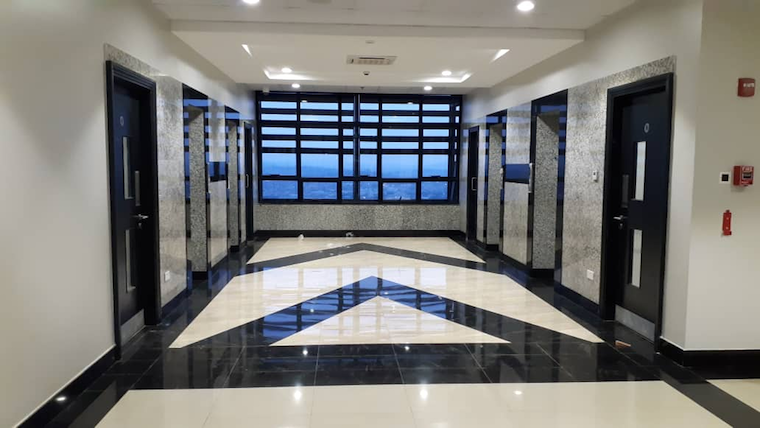 Inside the URA tower

The new Uganda Revenue Authority (URA) 23-floor tower in Nakawa was today afternoon flooded with water after a heavy downpour.

In a video captured by a staff member, employees are seen running away from their desks taking refuge in another corner. Computers which were on desks were left to be pounded by the leaking water.

After a while, some staff members are seen running back to their desks to pull off the computers in order to salvage them from the water impact. It is not clear which floor was leaking.

The 23-floor building cost taxpayers Shs 139bn. It was officially opened by President Yoweri Kaguta Museveni in January this year. Its completion meant that URA had to shift most of its staff from nearby Kampala offices to the tower.

The building also houses the office of the URA commissioner general Doris Akol. URA said in a statement that its tower "is a green building, designed to use a natural ventilation system where fresh air comes through the louvers, and hot air rises through the atrium and finally exits through the louvers at the rooftop."

Adding; "Today we experienced exceptionally heavy rains with strong winds which pushed rainwater through the rooftop louvers that dropped to floor two where the atrium starts."
The tax body said a more robust solution is being put in place but also at the same time maintaining the original designs to make energy-efficient and environmentally friendly.

Video making rounds of what could be the new US$37 million URA Towers building. This rain will get people sacked 😂 pic.twitter.com/0xbZCOrGr8

Why didn't they just let our own villagers to build a grass roof?
Report to administrator
+1 #3 Akao 2019-09-03 00:12
Blah blah blah. I am sure the work was supervised by a government handy man who received as much money as the construction company did.

What a shame this country has become, amateurish in everything. They send their MPs all over the world to see how things are done and they go back empty headed.

As optimistic as I am, I believe in one year, the airline will become history again
Report to administrator
+1 #4 Odongkara 2019-09-03 13:04
This is not news for a country like Uganda where shoddiness in everything is the order of the day!

A lot of money spent but some stupid fellow can shamelessly say "a more robust solution is being put in place." so the work was done without taking into consideration such tropical storms which are a common occurrence?
Report to administrator
0 #5 Odongkara 2019-09-03 15:06
Ugandan projects will never be clean.
Report to administrator