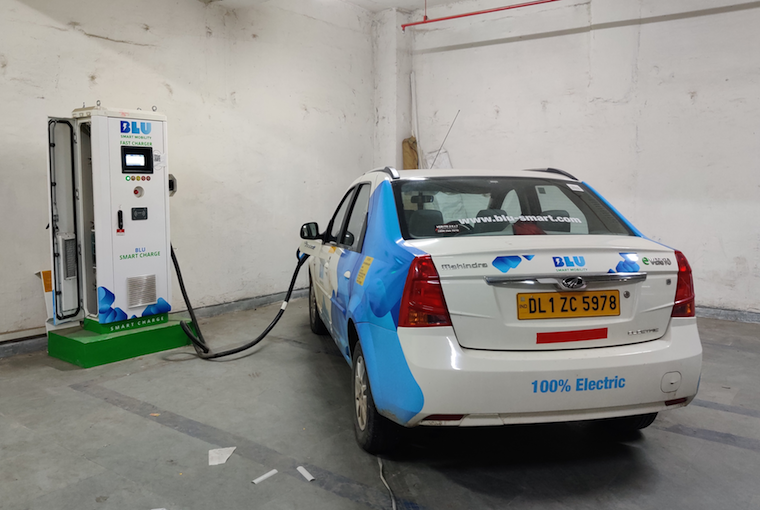 The 100% electric cab getting charged

NEW DELHI - Among the thousands of cabs that weave their way through the congested morning traffic in the capital New Delhi and surrounding business hubs, a white and blue cab with the words "electric vehicle" catches the eye.

In a city where app-based cabs are booming due to poor public transport, a start-up has launched the country's first all-electric cab service.

Some residents have embraced the initiative. Business analyst Mahak Chopra says she prefers using app-based cabs so she can catch up on work or her reading during long commutes. She now books one from Blu Smart Mobility so that her ride does not add to the fumes from the millions of vehicles blamed for the toxic air in one of the world's most polluted cities.

"Any kind of step is a good step, be it planting a tree, or taking an electric cab, and rather not using my private vehicle which is petrol and using electric cab, yeah, I do think I am actually contributing toward better Delhi," says Chopra.

From electric rickshaws to cabs, commercial vehicles in India are leading the way in bringing electric vehicles into the mainstream as the government makes a push toward electric mobility. The aim: reduce India's heavy dependence on expensive oil imports and tackle the deadly smog that shrouds its cities - 15 of the world's 20 most polluted cities are in India.

It is still a distant goal for a country that had once hoped that all vehicles would be electric by 2030 -- electric cars accounted for less than one per cent of the 3.3 million cars sold last year.

The government hopes to change that by nudging taxi operators to convert their fleets of petrol and diesel cars to battery-driven ones and urging scooter and motorbike manufacturers to draw up plans to switch to electric vehicles.

It has announced tax breaks to compensate for the higher cost of electric cars and is promising subsidies to establish charging stations and batteries to fill the gap in its hugely deficient infrastructure of charging and battery-swapping stations.

The startup Blu Smart Mobility launched this year as such incentives made plying e-vehicles viable.

"In the long run, if you do the math it checks out, the returns on electric mobility is about three years," says its co-founder Punit Goyal.

"It is much better for the environment, at the same time it is much more efficient and cheaper to operate an electric car."

Optimistic that electric cars are the future, the service is adding to its fleet every month and plans to have 1,500 cabs by the year-end.

Some customers hope these battery-operated taxis will nudge private transport in the same direction.

"When lot of cabs are there which are visible, then the customer, the private car owner will also start to purchase it," says Prateek Arora, a calibration engineer in the automobile sector, who also prefers to ride in electric cabs.

Electric cabs are not the only ones to make a debut. While cars and cabs are still minuscule in numbers, more than 1 million battery-powered electric rickshaws have mushroomed in towns and cities, unexpectedly emerging on the front lines of India's effort to go electric. It is estimated to be the world's largest fleet of such vehicles.

They weave through smoggy, crowded streets from metro stations and low-income neighborhoods to business districts, cramming in passengers for an affordable 10 or 15 cent ride. That is helping them replace the traditional auto-rickshaws that long played the role of reasonably priced taxis in India.

"Because of large population and large requirements of last mile connectivity, e-rickshaws are very, very suitable for that kind of usage and that is why you see a geometric progression in growth," says Shishir Agarwal, managing director at Shigan Evoltz, which manufactures e-rickshaws. "Low cost of ownership, low maintenance, ease of operation, it was a big opportunity."

The affordable $2,000 price tag for the e-rickshaws has driven demand and helped companies in the sector do brisk business. They also provide an option for those seeking a livelihood in the city. And these vehicles have helped many to upgrade from the rigors of peddling the old-fashioned cycle rickshaw, which is usually one of the first way for migrants to earn a daily wage in the city.

"I was a graduate but did not get a job, so I bought this e-rickshaw. It helps me run by household expenses," says Bhagat Ram Lohia in Gurgaon, a business hub near Delhi. He charges the vehicle battery at home at night.

Companies like Shigan Evoltz are optimistic about the future of e rickshaws.

"I believe the entire small vehicle category, whether it is two-wheelers or it three-wheelers, will totally turn electric," says Director Gagan Agarwal.

Goyal also is confident of quickly increasing his customer base for electric cabs at a time when public focus is firmly on issues like climate change and pollution. "People want to move to cleaner mobility, healthy food options, likewise, healthy travel."

While some of India's electric vehicle rides are noisy but inexpensive, others are more pricey and comfortable. For a country battling toxic smog, though, many are hopeful it is a move in the right direction.

One can only unlock it and ride it and leave it at the final destination for the next rider. The Indian shit is outdated.

Many advanced countries( major USA cities) now use single electric scooters which one can stand/sit on it and ride across towns.

One can only unlock it and ride it and leave it at the final destination for the next rider. The Indian shit is outdated.

M7's Uganda is still backward, that is why it cannot even build a railroad (SGR) to now where.

U mean the same scooters that are being banned in those cities because they’re a nuisance?

As it turns out there are no regulations to govern them and legal risk for cities is high so cities like Nashville, SF etc. threw them out.
Report to administrator
0 #3 karemire 2019-09-02 09:25
Quoting the commenter:

[quote name="Lysol"]Many advanced countries( major USA cities) now use single electric scooters which one can stand/sit on it and ride across towns.....

I agree. Just for emphasis of your points: (1) The dirty cars and scooters are not thrown out but are THROWN INTO banana states such as ours.

Look at the huge number of used cars that are for sale in and around K'la. Ugandans are proud to re-own others shit, it seems!!!!!

(2) The leading country in going electric is Norway, and not India as stated in this article. (3) Charging points on the streets are a requirement for adopting electric rides. (4) It would seem that UG's oil will {economically) come out to late.
Report to administrator