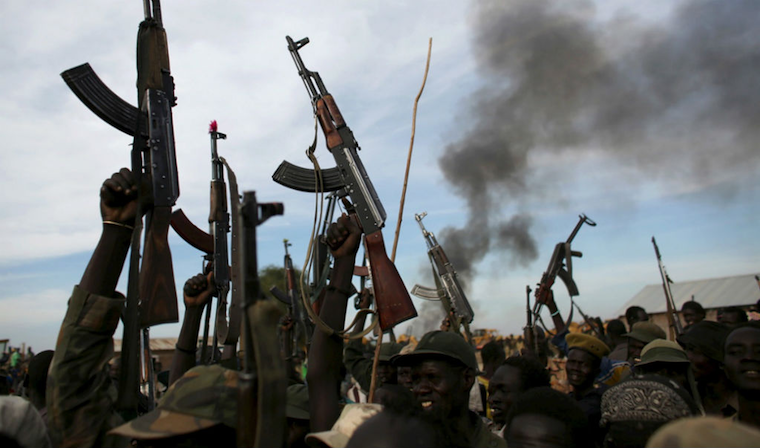 Ugandan youth are reportedly being lured to join the S.Sudanese war

SPLA IO is a breakaway faction from the Sudan People’s Liberation Army (SPLA), the official South Sudanese army and is allied to Dr Riek Machar, the former South Sudan vice president who rebelled against President Salvir Kiir in 2012.

According to Kidega, South Sudanese authorities complained during their an inter border meeting in Torit State headquarters about Ugandans being recruited into SPLA IO ranks.

The inter border symposium was convened in regards to complaints by Ugandan authorities about armed South Sudanese soldiers threatening farmers currently in the areas of Adodi wilderness in Lamwo that borders South Sudan.

It is alleged that during the meeting, Alberio Tobiolo Oromo, the Torit State governor claimed that they had identified some Ugandan nationals who are holding military ranks within the SPLA IO rebel faction who are now persuading Ugandan youths to join their ranks with promises of decent remuneration.

He singled out Captain Geoffrey Komakech, a resident of Lukome in Gulu district who is now in the SPLA IO ranks, claiming that he has recruited over 30 youths from Gulu, Lamwo and Kitgum districts. Kidega asked Ugandans to denounce those approaching them to join the rebel ranks.

Lokung sub county LC III chairperson, Ocan Joackim Opoka confirmed receiving reports that some South Sudanese nationals living in the diaspora are sending dollars to the Ugandan youth allegedly through Western Union to join SPLA IO. Efforts to get a comment from the UPDF 5th spokesperson, Captain Hassan Kato on the matter were futile.

+1 #1 kabayekka 2019-09-01 11:09
The South Sudanese authorities seem to be running mud. There are now about over one million young Africans who have migrated from many of their African countries so that they can try their luck in Europe and Asia.

No one has not read of the suffering many of them are going through and that is why other youths are trying to go and work in the Middle East.

If South Sudan by getting its independence means everlasting civil war and economic investment meaning buying and arming yourself with AK47, well what do the higher Sudanese authorities want the masculine African youth to do if there is good money to earn over there?
Report to administrator
0 #2 kabayekka 2019-09-01 11:22
The Sudan and the Congo or Zaire are African countries that seem to have earned a name for themselves as countries that are going to keep fighting until Christ comes back to earth.

One wants not to believe that such diseases as Ebola and AIDS are part and parcel of African chemical warfare for those countries that enjoy to partake everlasting civil wars.
Report to administrator
+2 #3 Odongkara 2019-09-01 12:59
Your heading "Money lures Ugandan youth into joining South Sudanese rebels" doesn't fit the reality and facts on the ground.

The SPLA-IO don't have that allowance for foreigners into it's rank and file. The tribes of Acholi, Madi, Kakwa are strewn across the borders of Uganda and South Sudan.

There are South Sudanese Madi, Acholi and Kakwa in the SPLA-IO and these are what many mistake for Ugandan youth. Look at Kale Kayihura, is he Ugandan or Rwandese?

This article is purely alarmist at it's best but at it's worst a propaganda by the UPDF for a cover up of their illegal existence and operations in South Sudan.

Secondly, the SPLA-IO is a voluntary revolutionary people's movement devoid of any external funding. From Dr. Risk Machar to the least citizens, nobody is paid money gains but sacrifice their blood and lives for good of South Sudanese. Now what motivates a Ugandan youth to make such sacrifices? This article is just fake news!
Report to administrator
+1 #4 Odongkara 2019-09-01 13:01
uqgqsThirdly, if it be true that Ugandan youths are within the SPLA-IO, what is wrong with it?

Did Rwandan refugees not joined the Museveni rag tag NRA? Where did Paul Kagame, president of Rwanda start and developed his military career?

Not in Uganda with the NRA? so what is good for the goose is good for the gender! What comes round, turns around!
Report to administrator
+2 #5 Paco paco 2019-09-01 14:09
The border issues must be taken seriously and solved Amicably...Adodi belongs to South Sudan and Ugandans have encroached alot on South Sudan land during the period when most South Sudanese ran away from their home due to the war...Local politicians and other influential leaders must not play around with this issue
Report to administrator
+1 #6 Changkouth Bouth 2019-09-01 14:16
You meant poverty is driving Ugandan nationals into joining the South Sudan government to loot its resources or to continue robbing its people instead.

Unfortunately Uganda government role in this conflicts has been documented,
Report to administrator
0 #7 WADADA roger 2019-09-01 23:13
Well, I know there is alot of poverty in Uganda and among the youth of northern Uganda due to lack of jobs but mainly especially due to favoritism and nepotism in sharing the national cake, it appears jobs are for a few who know some people in Government.

But the choice to join the South Sudan People’s Liberation Army is such a big threat, one of these days, these guys may to attack Uganda as rebels
Report to administrator
+1 #8 Lysol 2019-09-02 01:15
Uganda has always been known for it's mercenary(aka peace keeping) job since M7 came to power.

The so-called special forces of the adopted son has always been used across the region for such jobs.

Even though they failed to capture/kill Kony and Machar in the jungle of Zaire(aka DRC)and S.S. One Aronda paid for it with is life.
Report to administrator
0 #9 Lakwena 2019-09-02 15:58
Quoting kabayekka:

The Sudan and the Congo or Zaire are African countries that seem to have earned a name for themselves as countries that are going to keep fighting until Christ comes back to earth.

One wants not to believe that such diseases as Ebola and AIDS are part and parcel of African chemical warfare for those countries that enjoy to partake everlasting civil wars.

Kabayekka, if it is the Ebola vile being lobbed into the targeted villages every now and then, then it is a biological warfare/head scheme, to scar the sh*t out of the folks who occupy the mineral rich jungles.

In other words, if the the end justifies the means, it includes infectious diseases.
Report to administrator