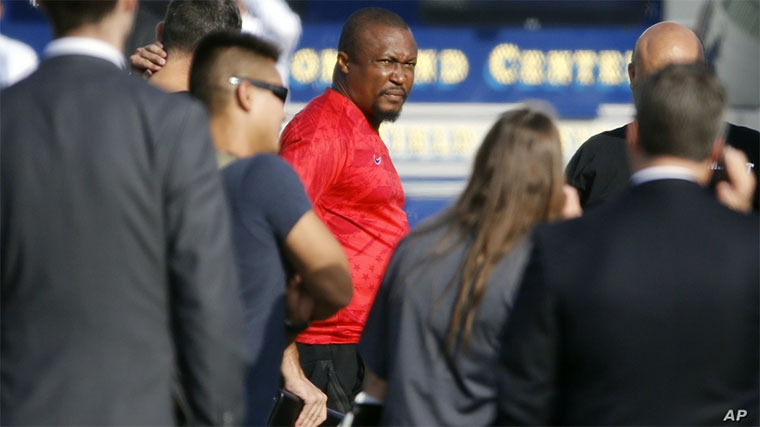 Federal agents hold a detainee, center, in Los Angeles after predawn raids, Aug. 22, 2019. U.S. authorities have an indictment charging 80 people with participating in a conspiracy to steal millions of dollars through fraud schemes and laundering the funds

For years, dozens of scammers from Nigeria and other countries swindled millions of dollars from U.S. businesses and individuals, funnelling the stolen money through accounts provided by two fellow Nigerian “brokers” based in Los Angeles.

In the burgeoning underworld of online fraud, Nigerian nationals Valentine Iro and Chukwudi Christogunus Igbokwe were well-known operators who went by a raft of pseudonyms, including “Iro Enterprises” and “Chris Kudon.”

Between 2014 and 2018, Iro and Igbokwe, working with nearly 80 other international swindlers, facilitated a series of schemes that resulted in the theft of at least $6 million and the attempted theft of $40 million more from victims in more than 10 countries, according to a 252-count federal indictment unsealed Thursday.

The scammers victimized individuals and small and large businesses. In targeting businesses, they used a tactic called “business email compromise,” also known as CEO fraud. Under that scheme, a fraudster gains access to a company’s computer system and then, posing as a company executive, tricks an employee into making an unauthorized wire transfer into a bank account the fraudster controls.

The indictment documents several corporate victims. In 2014, a San Diego clothing distributor wired nearly $46,000 into a bank account controlled by one of the scammers, believing it was paying a Chinese vendor for an order of men’s shirts.

In 2016, an unidentified Texas company was tricked into wiring $187,000 into a fraudulent account. The company thought it was making a payment for an oil extraction equipment order. The conspiracy also targeted the elderly and victims of so-called romance scams.

For example, in 2016 a Japanese woman, identified in court documents as F.K., lost more than $200,000 during a 10-month romance scam with a fraudster who impersonated a U.S. Army captain stationed in Syria. In 2017, an 86-year-old man with dementia and Alzheimer’s wired nearly $12,000 to a bank account controlled by one of the fraudsters.

The Justice Department unsealed the indictment after the arrest of 14 people, including Iro and Igbokwe, early Thursday. Three others were already in custody. Six defendants remain at large in the United States, while authorities are working with partners in nine other countries to arrest 57 others, most of whom are believed to be in Nigeria.

In a statement, Abike Dabiri-Erewa, the Nigerian in Diaspora Commission Chief, urged “those accused in Nigeria to voluntarily turn themselves in to American authorities to clear their names.” She added that Nigeria should extradite the defendants “if relevant international treaties between the two governments are invoked.”

Citing a Justice Department policy, a department spokeswoman declined to say whether the U.S. has made an extradition request. Since 2014, Nigeria has extradited three people wanted in the United States.

While the sheer number of defendants named in the indictment is extraordinary in an online fraud case, the investigation also shed light on the evolving tactics and growing sophistication of scammers. Once targeting mostly individuals, they are increasingly victimizing businesses.

“They were very inclusive as to the fraud they were perpetrating and laundering money for,” said Alma Angotti, a managing director at the consulting firm Navigant in London who advises government and corporate clients on anti-money laundering strategy.

Online fraud has become increasingly pervasive in recent years. In its annual Internet Crime Report in April, the FBI said online theft, fraud and exploitation were responsible for $2.7 billion in financial losses in 2018, up from $1.4 billion in 2017. Meanwhile, romance scams cost Americans $143 million last year, according to the Federal Trade Commission.

The Nigerian fraudsters targeted victims around the world, some of whom lost hundreds of thousands of dollars. At least 16 companies were among the victims. Iro and Igbokwe, the men at the heart of the scam, hail from the Nigerian city of Owerri, according to a criminal complaint filed in the case.

Many fraudsters knew them from Owerri. Others were directed to them through middlemen.

“I am known all over the world,” Iro once bragged to a fellow Nigerian con artist, according to the complaint. “Even people I never meet before call me and give me better business.”

For swindlers seeking a temporary haven for stolen funds, Iro and his partner allegedly provided a valuable service.

Using a network of “money exchangers,” they then helped the fraudsters funnel the money out of the country. The men took a cut of 20% to 50% of each transaction. It was a lucrative business.

In 2017, according to the indictment, Iro and Igbokwe sent at least $5 million to the Nigerian accounts of the fraudsters, family members and themselves, according to the complaint. Evidence seized by the FBI indicates the two men were using the stolen funds to build large houses in Nigeria.

0 #1 kabayekka 2019-08-26 13:29
One wonders if these fraudsters had built a company in Africa dealing in building major infrastructure projects with the assistance of the World Bank and IMF, would the FBI be on their backs by now?

Trouble with the rich ruling elites of Africa is that they steal lots of money from their respective countries and deposit it in western civilizations and when they die it is left well deposited in the banks for ever.
Report to administrator
+1 #2 kabayekka 2019-08-26 13:34
Unfortunately for these African countries like the Oil rich country of Nigeria that have borrowed heavily to build their economic infrastructure, the IMF and the World bank still want their money paid up every other month!
Report to administrator
0 #3 Wooden K. 2019-08-26 15:11
Hello Uganda , here we go again !

What do you expect ?

33 years of Musevenism has made Uganda the World centre for all crooks , scammers, forgers , drug-trafficers& users , prosititutes , fake pastors, and all sorts of "refugees".

They come from everywhere , buy houses and land within months , and nobody asks any question. Najjanakumbi has become a district of Sudan and Eretrea. There are Nigerian bars in Kasanga , Kongolese saloons in Mengo , Senegalese quaters along Rugaba Road , etc etc

Its like there is no government here to controll anything.