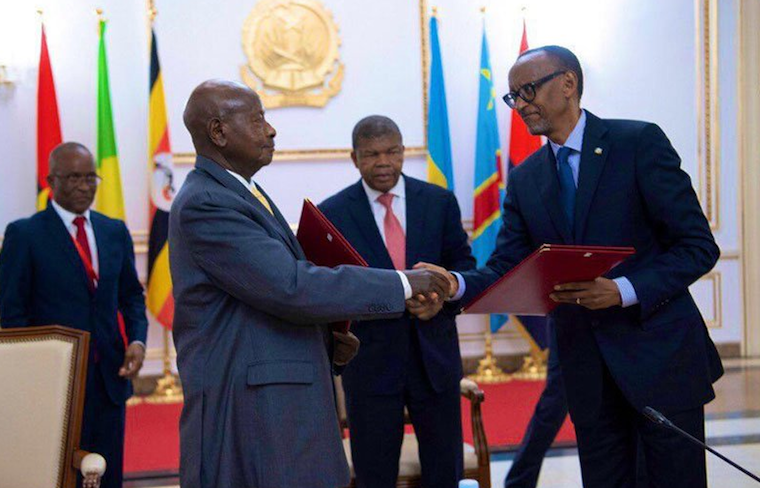 Museveni and Kagame signed an MoU to respect each country's sovereignty

Uganda and Rwandan leaders have agreed to respect each other's sovereignty and of neighbouring countries, refrain from subversive activities in the territory of the other and eliminate all factors that may create such perception.

The leaders resolved to respect and protect the rights and freedoms of the nationals of either party residing or transiting in their national territories, in accordance with laws of their countries and desist from financing, training, and infiltration of destabilizing forces.

This is part of a Memorandum of Understanding (MoU) signed by the Ugandan President Yoweri Museveni and Paul Kagame of Rwanda, to resolve tensions existing between the two countries. The memorandum was signed in the Angolan capital Luanda on Wednesday.

The pact indicates that the two countries will resume cross-border activities, including the movement of persons and goods. The presidents also undertook, in the spirit of Pan-Africanism and regional cooperation, to comprehensively cooperate in politics, security, defence, trade, and culture.

The leaders of Angola and DR Congo are the facilitators of the agreement whose signing began with a quadripartite summit on July 12, where the four leaders met and agreed to begin a resolution process.

To implement the resolutions, the leaders agreed to establish an Adhoc commission headed by ministers of foreign affairs and composed of ministers of Internal Affairs/Administration and heads of intelligence, to see this through.

Diplomatic relations between Uganda and Rwanda nearly came to a standstill when Rwanda closed its border to Uganda in February this year, also warning and preventing its nationals from travelling across. Rwanda has accused Uganda of harbouring and facilitating rebel elements fighting against Kagame's government and mistreatment of Rwandans living in Uganda. Likewise, Uganda accused Rwanda of destabilising security and stability within Uganda through espionage.

Museveni thanked his Angolan counterpart, Joao Manuel Lourenco, for overseeing a reinforcement process that has culminated into Uganda and Rwanda signing a pact to improve their political and economic relations.

"I thank President Lourenco and Felix Tshisekedi of DR Congo for coming in so that we share the information we had and ensuring that we have a communiqué with Rwanda," he said.

Museveni noted that he was already in touch with Kagame to seek a resolution on the issues between the two countries when presidents Lourenco and Tshisekedi invited him to the summit.

"I was already in touch with President Kagame through our own channels but this came as a reinforcement. We are just re-affirming what we have always held as principles of the African Union," he said during a media briefing at the plush gardens of the Presidential Palace in Luanda.

Addressing the media, host President Lourenco congratulated Presidents Museveni and Kagame for making the signing of the agreement possible.

"The signing alone cannot replace the problem," he said. "The solution resides in the political will of the leaders to take full commitment to respect what they have signed and we are very certain they will do that."

Co-facilitator President Tshisekedi was also full of praise for the two principals, calling them “great presidents" who had seen the need to end the conflict and consider the superior needs of their nations.

President Dennis Sassou Nguesso of Congo-Brazzaville, who was a chief guest by virtue of being chair of the International Conference on the Great Lakes Region, said the agreement was a reflection of well-known African traditions of solving problems through dialogue.

+3 #1 Lakwena 2019-08-22 13:57
Since the duo (Mr. M7 and Kagame) are Masters of Violence and Treachery (backstabbers), the Memorandum of Understanding (MoU) can as well be classified as the "Luanda Jokes", sic a "Memorandum of Misunderstanding (MoM).

In other words, it is just a piece of paper! It will be business as usual: intrigue, until one falls.

Given their oversize self-importance, ego and treachery; the communique signed thousands of miles away in Luanda Angola, is not worth the paper and ink, and our tax money scattered in the sky between Entebbe and Luanda.

In other words, until the two countries get brand new leaders, without bloodstain on their hands, the relationship between Uganda and Rwanda will never be the same again.

These guys caused genocide in Luweero Northern Uganda and Rwanda. As a result caused great heartache, pain and suffering to the people of the two countries.
Report to administrator
-2 #2 Mubiru 2019-08-22 14:03
The relationship between Kagame and Museveni is similar to that of the brothers Prince William and Prince Harry of Britain.

Whatever "misunderstanding" between the pairs is superficial and trivial. All the so called misunderstanding "resolved" by signing the so called memorandum of understanding is a farce to blow up the case like a balloon as if their "misunderstanding" was genuine. It is only Ugandans who can be duped and fooled all the time by their quibbles.
Report to administrator
+1 #3 ejakait engoraton 2019-08-22 18:04
This is like a husband and wife going to the relatives and even bringing in the LCs to decide or agree on the days they will have sex, who buys food and who cooks and who pays school fees for the children.

Considering the history between the country and its peoples, things should never have reached this stage.

THAT we have never had to implement or even think of going into such “arrangements” with any of our other neighbours , even Kenya when things were are at their worst, is a telling factor.

BUT knowing our leaders, they like to create a problem where one never existed, and then claim to have solved it and then with all the accompanying fanfare.

ONLY a fool would think that this is a great achievement.
Report to administrator
+2 #4 Lysol 2019-08-22 23:18
The prodigal son(Kagame) finally returned home.

Museveni was scared/worried that the son was hanging out too much with his western rivals(like Angola, DRC and Namibia) and could frustrate his dreams to rule Africa( through his pan-Africanism bullshit) by Rwanda joining the powerful SADC.

And also being isolated as a lonely aging man in the region..Up north he is losing control of South Sudan which he had been brainwashing/manipulating gullible one Kiir.

Because Bahasir is no longer there. He cannot screw up with Kenyatta or Magufuli He has got no real friends anymore. Both(Kagame and Museveni) are vindictive/brutal men. At some point they will double-cross each other and only one will remain standing. Kisangani!!!!!
Report to administrator
0 #5 Peter Odama 2019-08-23 05:35
Who is the trouble maker here please?
Report to administrator