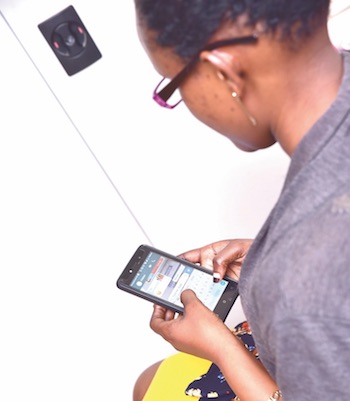 Reason? The former BCM (Biology, Chemistry and Mathematics) student had seen her face photoshopped (adjoined) onto nude pictures and shared within the classroom boys’ WhatsApp group.

The pictures eventually found their way into the classroom girls’ WhatsApp group as well, and for days, Samira became a victim of cyber bullying and harassment. The bullying got physical. Her notebook pages were shredded when she reported to school authorities. Apparently, Samira has since gone on to become a drug addict.

At Aga Khan School, students from senior three are allowed to carry phones (minus earphones) as long as they are not a distraction during class. Like mental health, generally in Africa, online criminality is often taken as a Western world ‘issue’ or a rich people’s problem that hardly affects Africans.

And more children fall prey to several scams and abuses. Simran Merali, a Next Radio presenter, who suffered cyber bullying herself while in school, said she became very cautious and lost her self-esteem and identity by becoming a ‘people pleaser’ when she was confronted with negative comments about her online posts.

“I started supporting stuff that I did not mean to support because I wanted to please people,” she said. “I became obsessed with how many likes, retweets I got out of my posts. This [mental crisis] hit me in phases as I would be okay today and then tomorrow I wasn’t okay. This affects early teenagers more because they want to be perceived more [living fake lives]. I was always concerned about people’s validation but I got over it after 16 and 17 years,” she added.

It is precisely for this reason that social media giant Facebook used its platform, Instagram, in June this year to roll out an experience test in at least seven countries – Australia, Brazil, Canada, Ireland, Italy, Japan and New Zealand - because “we want your followers to focus on the photos and videos you share, not how many likes they get.”

Simran said she personally knows of at least six people at her former school and another international school who got into drug abuse and self-harm situations. They drunk bleaching detergents, cut themselves with broken glass and razorblades following online unflattering comments about their appearances.

Any person of any race, colour, male or female can get depressed, as long as something or someone has a brain and they are inclined to go through psychological stress, Simran says. A recent research report titled; Utilising information and communications technology to prevent violence against children in Uganda, by Dr Richard Wotti Wamimbu from the Centres for Child Protection and Learning, reveals just as much.

One of technology’s greatest triumphs is the breaking of geographical barriers and Wamimbu’s survey, which surveyed at least 2,232 children across the four regions of Uganda, confirmed the obvious - online abuse knows no boundaries.

With slight disparities, children; both male and female and from rural and urban settings, all listed exposure to online child pornography (66%), talking to and meeting strangers (45%), watching/listening to violent content (25%), betting (22%), trafficking (14%), coordinating theft or robbery (14%), cyber bullying (12%) and exposure to extremist content (10%) as their greatest risks online. 72% of the surveyed children answered in the affirmative if they thought a child could be abused through ICTs.

61% said they knew of someone who has been abused through ICTs, 32% said no and 8% did not know. Just last month, Simon Twesigye, 30, a resident of Church Zone, Kamwokya in Kampala was arrested by area residents after one of the victims, a seven-year-old boy confessed to have been sodomised by him.

James Kakooza, the Kamwokya II parish and LC I chairperson of Church Zone, said Twesigye was enticing children with sweets, and roast chicken.

Six boys aged between eight and 13 ‘confessed’ to have been abused at least twice, while two others say they were abused once. According to Kakooza, Twesigye would watch pornographic material with the children on his smartphone and then later ask them to do what they had just watched.

“He had a small phone with which he has been showing them obscene videos, pornography. He admitted that he was showing them [pornographic] videos, but on raping them; he denied. But the boys pinned him, telling him you did it on such and such a day...One boy’s anus was raptured, he can no longer hold feaces,” Kakooza said.

When The Observer visited Butabika, Uganda’s biggest mental referral hospital, to inquire if there were any patients admitted as a result of online abuse, the officials expressed shock at the suggestion.

“For us we have never admitted people like that. This hospital has stigma attached to it, maybe such patients are admitted in private hospitals,” an official who declined to be named said.

Edris Kiggundu, the editor of NilePost at Next Media, has often declared both in public and private that he has banned Nigerian movies in his home because of their negative impact on his children.

“I have this private folder where I keep my private stuff [pornography], you know. It’s invisible to even my ever-inquisitive mother. I know she bought the phone, but duh it’s my phone and I’m better at operating it than her,” a 14-year-old girl said.

Last year in November Pamela Amongi, a senior woman teacher at Lira Central primary school, told the parliamentary select committee on sexual violence that exposure to print and visual pornography has led to a rise in defilement cases and sexual relations among students.

“I have interacted with two students whose performance was deteriorating but I was shocked when they confessed that they had been watching pornographic movies and they feel so addicted to the movies, which is affecting their time in school,” she said.

“I have witnessed a mother watching pornography with her daughters. When I intervened, the mother simply asked me to mind my business because they are living in the modern world,” she said.

Richard Wasajja, a teacher at Our Lady of Africa Mukono campus, told The Observer that he is not aware of any existing ICT policy for schools. Indeed the ministry of Education and Sports has been mooting the idea for the last three or four years.

Dr Kedrace Turyagyenda, director, Education Standards in the ministry, referred us to Patrick Muinda, the officer in charge of ICT, but he was not available for an interview by press time.

“If we are talking of bad images, then it looks like every child has been abused because some music videos on TV or in these funny video halls really contain a lot of pornography in them and yet some of our children escape and watch them or even in homes when we are away when the maids put on the screens.” a teacher said.

This article was researched with facilitation from AfriChild

No structure whatsoever and stuff is thrown onto each other. There is little interrogation/follow-up of some of the ideas introduced.

Why, for example, does that guy have an issue with Nigerian movies? How does it connect to the wider theme?

This is a mess.
Report to administrator