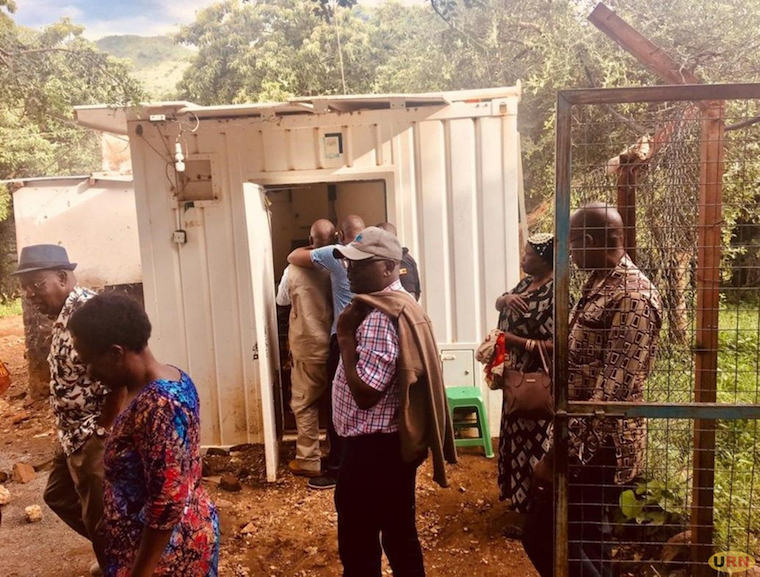 Numerous positive changes have befallen Uganda Broadcasting Corporation (UBC) Radio in Moroto after one of the workers openly complained to President Yoweri Museveni about the sorry state of the station.

Jehoshaphat Jones Opong, a staff at UBC Radio Moroto took advantage of the press conference organized by Museveni on the operation wealth creation programme at Morulinga State Lodge in June to expose the sorry state of affairs at the station.

He told the president that the government radio was unreliable; operating only twice a month and in a very sorrow state. Commissioned by the president himself in 2015, the radio operates from a small container that can easily pass off as a backyard store or toilet. The container even became a point of online mockery for Zimbabweans when Uganda faced Zimbabwe in the recent African Cup of Nations in Egypt. The radio's compound is littered with cow dung since it shares a fence with a neighbouring kraal.

UBC Radio, also known as Totore has been relying mainly on electricity - rendering it inaccessible during power outages. However, URN has learnt that the top UBC management in Kampala has taken interest in the radio, causing a number of changes.

The changes started with procurement of 300 litres of diesel for the generator at the radio, just a week after Museveni’s press conference. It was followed by several visits by officials from UBC in Kampala.

In her brief to the team, Anne Maria Lokwii, the station manager UBC Moroto, said that much as the radio is better placed in the area, its operations are frustrating both the listeners and the staff due to its unreliability. She also noted that most staff have suffered radiation effects since the studio sits next to the transmitter.

"I have a problem with that radio, it has radiation and our staff have been suffering. Whoever stays there for four hours, you go as if you have been quarrying stones. You go when you're feeling pain in the back." Lokwii said.

During his interaction, Rwehabura said the studio will be moved from its current location in Singila to the former Karamoja Development Agency area in the shortest time possible. He also promised to improve the welfare of staff and boost the radio coverage and quality for the listeners.

One of the staff at the station said on condition of anonymity that remuneration has improved at the radio with salaries now paid by 28th of each month. He said the momentum and motivation for work have been renewed through engagements with top officials, whom he noted, never visited the station in the past.

+1 #1 citizen 2019-08-20 12:05
what does this mean"Last week, a delegation of 12 officials led by the UBC board chairperson, James Rwehabura, UBC managing director, Watson Agaba and chief engineer, Michael Agaba visited the facility on a fact-finding mission".

The management of these public bodies should not be from one region please you people this is very very dangerous for the country. Plse create an environment that will prevent this country from burning. Give jobs also to pple from other regions.
Report to administrator
0 #2 rubangakene 2019-08-20 22:19
Omwony-Ojok will be turning in his grave when he was alive he initiated a strong development programme for Karamoja but unfortunately he died too soon.

Whoever ate the Northern Reconstruction money is partly to blame for this shenanigan. Nevertheless, if there was a strong cooperative effort, each adult would have donated a brick or money to build a reasonable outfit.

They could take advantage of the sunshine in the area to install solar power as 'back up' to run the station.
Report to administrator
0 #3 Wainainchi 2019-08-21 02:30
What are MPs and ministers doing there? Riding expensive jeeps and showing off?

Make them walk like in Gulu.
Report to administrator
0 #4 Darligton Sakwa 2019-08-21 05:01
It appears Ugandans who hold high government positions do nothing until the president directs them.

What are MPs and ministers doing there? Riding expensive jeeps and showing off?

what does this mean"Last week, a delegation of 12 officials led by the UBC board chairperson, James Rwehabura, UBC managing director, Watson Agaba and chief engineer, Michael Agaba visited the facility on a fact-finding mission".

The management of these public bodies should not be from one region please you people this is very very dangerous for the country. Plse create an environment that will prevent this country from burning. Give jobs also to pple from other regions.

In other words Citizen, you should have by now known the kamanyiro of Mr. M7 and parochial leadership style.

E.g., like the late Gen Aronda (RIP) once commented, it is the Banyankole and sic Westerners who are the most qualified to run the affairs of this country.

E.g. it was Janet Kataha Museveni who was the most qualified to be the Minister for Karamoja.
Report to administrator
0 #7 kabayekka 2019-08-21 16:43
It is true that if one wants to rule the majority of the people, it helps if one makes them poor.

If this radio had enough money to broadcast in this country and also abroad, the UCC would have closed it a long time ago.

Now that it has been re-energised, these well paid staff must be very careful about the stuff they intend to broadcast.

And certainly this radio must be able to pay for itself in the commercial market of mass communication.
Report to administrator
+1 #8 kabayekka 2019-08-21 16:49
Who in his right mind would ask and pay for this radio broadcast transmission?

Because the people of Karamojo are too busy looking after their cattle without radios that broadcast continuously Tamale's philosophy or Bujingo' s marriage problems.
Report to administrator
0 #9 Lakwena 2019-08-22 07:53
Quoting Darligton Sakwa:

It appears Ugandans who hold high government positions do nothing until the president directs them.

Is this accidental or it is by design?

But Musakhulu Sakwa, don't you know Mr. M7's bloody busybody? If these Minister and/or NRM MPs tried to do what you are questioning, they will lose their shirts/skirts and bacon.

If he/she is an NRM MP, at the next election, he will be replace. Likewise, any ambitious Minister who wants to outshine Mr. M7 will have to go: hence the sit and setbacks.
Report to administrator