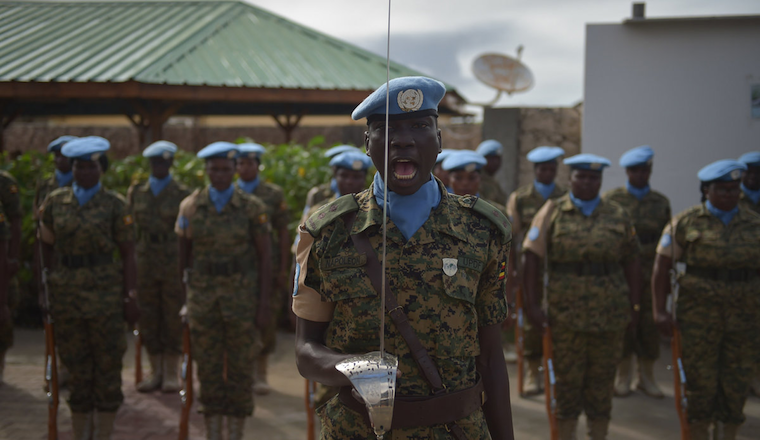 The combatants returned alongside 1,406 soldiers of the 25 battle group who had also completed one year of service. The Chief of Defense Forces (CDF), General David Muhoozi received the soldiers at the UPDF Peace Support Operations and Training Center (PSO-TC) in Nakaseke district.

Muhoozi applauded the troops for raising the Ugandan flag high on foreign missions. He acknowledged that Somalia and Africa at large still face numerous security dilemmas, which need to be encountered in unison.

Quoting Muhoozi, the deputy UPDF and Defense ministry spokesperson, Lt Col Deo Akiiki, said “It is in this spirit that we went to Somalia; extending a liberation struggle of Africa. A stable Somalia is a stable Africa.”

According to Akiiki, Muhoozi said UPDF now counts success in Somalia due to the selfless contribution made by the troops as well as their predecessors.

“Thank you for having Africa at heart. Despite challenges such as delayed payment of mission allowances due to circumstances beyond UPDF control, you have maintained their pan African spirit and remained focused on their duty,” Muhoozi said.

“Some people thought that since we were engaged in other operations like in Somalia we would not be able to respond to the call of confidence our brothers in South Sudan made on us. Others expected us to respond in months but they were surprised that in one week our battle group was in Juba and we had changed the situation,” Muhoozi said.

The commander of Land, Lt Gen Peter Elwelu revealed to the soldiers a plan to deploy some of them to command and nurture the recently recruited Local Defence Unit (UDU) officers. Last month, UPDF recruited 13,000 LDUs who are currently undergoing basic military training for four months at Oliver Tambo military school at Kaweweta in Nakaseke district.

Muhoozi granted the troops 45-day rest to recuperate. Akiiki said UPDF has already deployed its sixth UNGU team to secure the UN Mission in Somalia and the 28th battle group under the African Union Mission in Somalia.

Real armies do the fighting and leave the weak ones for peacekeeping/policing.

Of course he does it to win favors from the West/backers to remain in power and also for financial gains. Pan-Africanism is dead long ago. Many tried and failed. From Nkrumah, Lumumba, etc. Not to mention one Gaddafi. He will die trying.
Report to administrator
0 #2 rubangakene 2019-08-19 23:24
What have they achieved so far, eh; the bombs are going on undeterred as we speak.

It is better to send in non uniformed personnel to train Somali police in crime investigation as uniforms always brings resentment.
Report to administrator