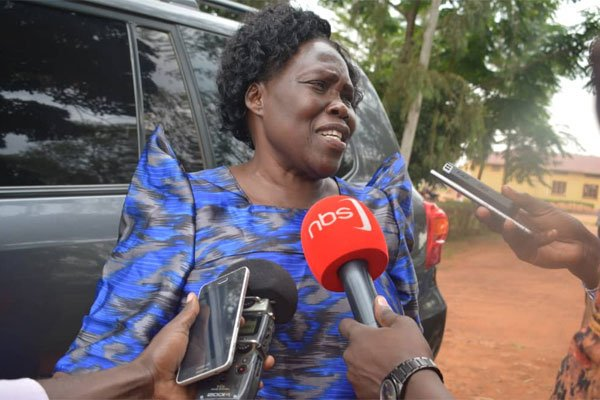 Angry residents of Bardege Division in Gulu Municipality have forced the Leader of Opposition in Parliament (LoP), Betty Aol Ocan to trek for three kilometers in protest over the poor state of their roads.

The LOP had paid an impromptu visit to the people who had gathered at Gulu Municipal council offices Monday morning demanding for answers about bad roads in their area. The angry residents had earlier on blocked the five-kilometer Oola Lubara road, which connects Gulu town to St Marys Hospital Lacor via Gulu airfield and Gulu Archdiocese Cathedral.

The residents led by the area LC III chairperson, Patrick Oola Lumumba tasked Aol, who also doubles as Gulu Woman MP to step out of the comfort of her vehicle and walk with them so as to get the feel of the bad state of the road, which they say has lasted for close to six years.

The residents walked with the legislator from the Gulu Municipal council offices up to the residence of Yusuf Adek Okwonga, the Pageya clan chief, about three kilometers away. Paul Onyegiu, one of the residents, says the road has been impassable for over six years especially during the rainy seasons but their leaders remain silent about the matter.

Aol, who was dressed in a light green gomesi and shiny black shoes moved for over two hours in the company of her four bodyguards who all ended up with muddy shoes and dirty clothes. She told URN at the chief's palace that she accepted to move in solidarity with the suffering people whose plight for better services hasn’t been addressed.

Earlier the residents used vehicles tyres, boulders and logs to block the road. They also mockingly planted crops on the road, arguing that it has become a garden. They later moved to the Gulu Municipal Council office from where the Gulu municipal engineer, Terence Okwonga assured them that the road will be upgraded to tarmac next year in January at Shs 6 billion.

Were Uganda as usual being fooled? While campaigning for the last presidential election, there was a similar photo posted of modern highway in Karamoja.

Not to mention that prank showing Museveni sitting by the roadside and pretending to talk on the phone. What joke. There are very few good roads in the country that is why many people dead in road accidents than most of the neighboring countries.
Report to administrator
+2 #2 WADADA roger 2019-08-12 22:40
Guess this is news because she is the LOP and the alleged force but walking only 3km is nothing
Report to administrator
+2 #3 Zaitun 2019-08-13 09:36
No, our diligent UNR writer, Ms Betty Aol Ocan was a victim of those wielding power who would want to heap all their failures on the poor woman. She is not the one who budgets for road constructions.

If these men and women who tasked her to walk the distance are tru to themselves, they should do the same to Museveni and or one of his cohorts when they come to visit them.

The local administrators should also be held responsible for their failure to use the budget of the area to reduce the sufferings of their people.

What influence does she have over all those hyenas that would not want to see other regions developed?
Report to administrator
0 #4 kabayekka 2019-08-13 16:24
In most countries, governments do not build roads. It is the professional engineers with their companies that build roads after taking on contracts of public and private partnership.

If the two business partners do not trust each other and cannot agree, well why should the tax payer suffer the consequence?
Report to administrator
0 #5 rubangakene 2019-08-13 21:55
If the cooperatives were around, these things wouldn't happen; you see, they would have decided among themselves to solve part of the problem themselves and tasked the local technocrats with bringing forth the needed equipment to upgrade the road.

As it stands, the man in Entebbe has created "roadblocks" i.e. local chiefs, LDCs, Council workers and useless posts, including LDUs whom you have to go through in order to solve a simple problem. You can change the system now for your own good!
Report to administrator