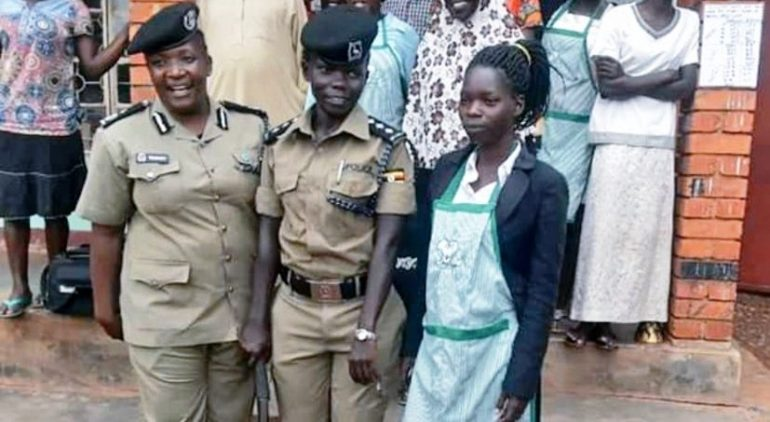 A woman purportedly knocked in an accident involving the late Michael Karinda alias Zigy Wyne, has been grilled by detectives at State House, Nakasero in Kampala.
The accident victim, Loy Atworo was reportedly grilled with seven other witnesses by State House detectives. Zigy reportedly succumbed to injuries in the wee hours of Sunday morning at Mulago national referral hospital where he had been admitted following a nasty motorcycle accident at Kyebando-Kisalosalo along Northern bypass on July 21 at around 7 pm.

Initially, Zigy's family had claimed that Zigy had been kidnapped and tortured leading to his death because of his links to Kyandondo East member of parliament, Robert Kyagulanyi Ssentamu alias Bobi Wine. However, police spokesperson Fred Enanga issued a statement on Tuesday indicating that Zigy Wyne had succumbed to injuries he sustained in a motorcycle accident.

Enanga paraded seven eyewitnesses including Amos Turyamureeba, Simon Kule Aheebwa, Dirisa Byaruhanga, Musoy Wekesa, Brian Musobozi, Sarah Kobisngye and David Kimbowa and the accident victim, Loy Atworo to collaborate police findings. Our reporter visited the accident scene at Kyebando-Kisalosalo on Wednesday to try and interact with the eyewitnesses but was told they had been picked by police in the morning.

A source said that the group was briefly held at Kira road police station before a decision was made to transfer them to the Criminal Investigations Directorate (CID) in Kibuli for interrogation. However, on their way to Kibuli, the vehicle was diverted to Nakasero State House following a telephone call from an unidentified person.

While at the Nakasero, the seven witnesses and the accident victim were reportedly grilled one by one by security officers at State House. They were returned to their respective homes late on Wednesday evening. Some of the witnesses confirmed to URN on condition of anonymity that they were indeed taken to State House and questioned on whether they were sure about what they were speaking about Zigy Wyne.

“I was asked whether I saw what happened. I told them what I saw on that day. I was brought back to Kyebando together with my colleagues in by police in a car,” one of the witnesses said.
Another witness said the State House operatives recorded whatever they said in addition to their statements at Kira Road police station. The source declined to divulge expressing fear about what might happen.

“I don’t want to speak much. For more information, you can visit police. I am not at work now but I was there briefly,” the witness said.  It is still unclear why State House could have taken interest in their matter.

Don Wanyama, the president's press secretary when contacted on whether the witnesses had been interrogated at State House told our reporter
"Nonsense. What does State House got to do with police investigations? Keep State House out of your drama."

During his briefing on Tuesday, police spokesperson, Fred Enanga, said Zigy relatives knew what had led to his death but decided to conceal information.
He explained that a nurse at Hope Clinic only identified as Kule had told police investigators that she attended to the deceased when he was rushed to the clinic by Good Samaritans.

Minutes later, Loy Atworo who was reportedly knocked by Zigy was also rushed to the facility. Zigy and Atworo were referred to Mulago hospital and Christian Caring Community Clinic respectively because of their deteriorating health condition.

According to Enanga, Atworo was traced by her relatives, Polly Adongo and James Otim, who immediately transferred her to Kamwokya Christian Caring Community Clinic for further treatment.
“The male victim (Zigy Wyne) who suffered serious injuries had no identification documents on him or mobile phone and remained unknown at this stage. He was bleeding from the nose, forehead and also had severe injuries to two of his fingers. The victim was not putting on his helmet and had no protective gear,” Enanga said.

Police said Zigy was delivered at Mulago hospital casualty ward by Kimbowa and Turyamureeba, a Boda-boda rider under inpatient admission number 471567/2019. He was indicated as unknown victim.

Short of that you would face wrathful Ofwono Opondo as was the case in the Bank of Uganda extra cash saga.
Report to administrator
+2 #2 ivo 2019-08-10 11:54
I saw the statement of loy otworo on youtube. She never said in that statement that she saw who was driving the motorcycle that hit her.

She was immediately knocked out unconscious and woke up in the hospital.

Accidents happen verry fast, in split seconds, i was in a few. Its impossible in those circumstances to look at numberplates and remember them later or recognize faces of those you collided with.
Report to administrator
+2 #3 karemere 2019-08-10 11:57
The list of those witnesses itself "interestingly" looks like a SRB one, doesn't it?.
Report to administrator
+3 #4 Remase 2019-08-10 13:43
Follow Ugandans, I have said it here and will say it again, M7 is the worst president and most brutal Uganda has ever had.

I know, Katikiro Mayiga believes otherwise. Here is proof, M7 captured power by means of violence and most of it was even manufactured by him to make us believe that Obote was bad and killed people yet it was M7.

Now, the police alleges that Wyne's death was caused by an accident! However, why would state house get involved in police investigations?

During the Arua saga, we were told that Kyagulanyi was caught with 2 guns! That was not true! Therefore, with M7, anything is possible! He is a master of deception!
Report to administrator
0 #5 Apollo 2019-08-10 17:20
When a well known Bank robber is accused of robbing Bank B, which could be a false allegation, the robber can feel exceptionally hurt.

It would not be farfetched for the Bank robber to consider court redress to clear his 'good' name. So is life.
Report to administrator
+1 #6 GoodMan Lord 2019-08-10 21:10
If Ziggy Wyne was having severe bleeding from his nose, forehead and also had severe injuries to two of his fingers, how did he manage to seat on a bodaboda and someone drove him to Mulago Hospital?

We have seen so many people being killed there and then but State House has never intervened. How come they picked up interest in Zygy Wyne?

I think they are looking for where they can pin Kyagulanyi to open up cases against him of what he may say about the death of his group. The death of Zygy Wine was planned purposely to look for the way to get Kyagulanyi in that circle. Otherwise, System Bulongote!!!!!
Report to administrator
+6 #7 Lysol 2019-08-10 22:52
Fake witness. That dude was killed by the state's operatives, Amin's style.

By the way , it seems she is malnourished, compared to the other two militia/police ladies. Sign of torture to comply may be?
Report to administrator
+2 #8 Lakwena 2019-08-12 07:43
In other words, the Ghosts of the notorious State Research Bureau (SRB) operatives have not left Nakasero. No wonder the bad Omen: Mr. M7/NRM captured power on the same day and month (25th January)

While the Demon that rode on Amin's shoulders to destroy Ugand jumped onto Mr. M7's shoulders; the terror and torture demons that rode on the SRB agents jumped on the shoulders of the CMI, ISO, ESo, etc. agents, to continue their diabolism.

Otherwise, since when has "State House" become the center of criminal investigation and interrogation?
Report to administrator
+1 #9 kirya 2019-08-12 17:39
The bushmen are behind the killing of these young men with their finger prints everywhere.

The old man killing our future leader who want to make a difference.
Report to administrator