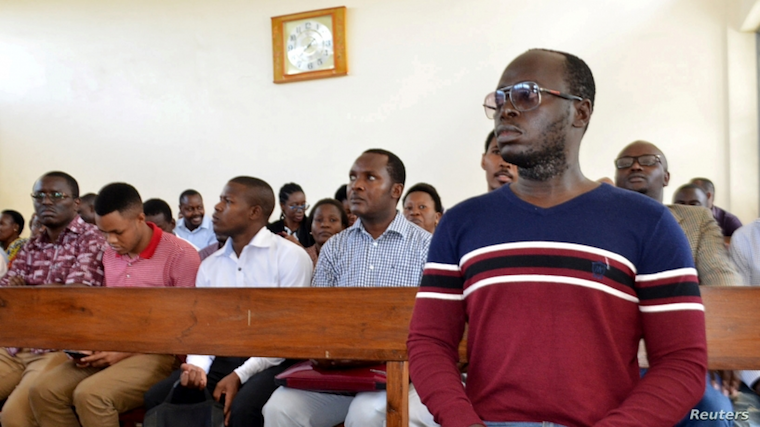 Kabendera, who was charged in magistrate court in the former capital, Dar es Salaam, had been taken into custody from his home July 29 over what police initially said were problems with his citizenship status.

Kabendera allegedly committed the crimes — including failing to pay $75,000 in taxes — from early 2015 into last month. Bail is not allowed for such offenses, so he remains in detention.

His case was referred to the division of corruption and economic of Tanzania’s High court, according to The Guardian, one of the news outlets to which Kabendera has contributed. His next court date is set for August 19.

The freelance journalist has been critical of President John Magufuli's administration and the ruling Chama Cha Mapinduzi Party in stories for The Guardian, The East African, and The Times of London.

Opposition and civil rights groups say Kabendera's case is a government effort to silence dissent — a notion disputed by the administration of Magufuli, who was elected in 2015.

"Prosecutors should immediately drop the charges against Kabendera, and Tanzania should end its practice of retaliating against critical voices," Muthoki Mumo, sub-Saharan African representative for the Committee to Protect Journalists, said in a release from the New York-based group.

Onesmo Olengurumwa, the national coordinator for the Tanzania Human Rights Defenders Coalition, told VOA in a phone interview that the group would continue to defend journalists in Tanzania.

"Our role is to always campaign for justice and then also use courts of law to seek that," he said.

The watchdog group Reporters Without Borders ranks Tanzania 118th among 180 countries in its current World Press Freedom Index. It notes the country has fallen "47 places since 2016, more than any other country in the world during the same period."

This Magufuli Dude came like a Chameleon..Tanzanians have to wake Up and remind him of Mzee Nyereere´s Legacy...Nyani hayawoni Nyuma lake..but laughs at the other for having a Red Ass..
Report to administrator