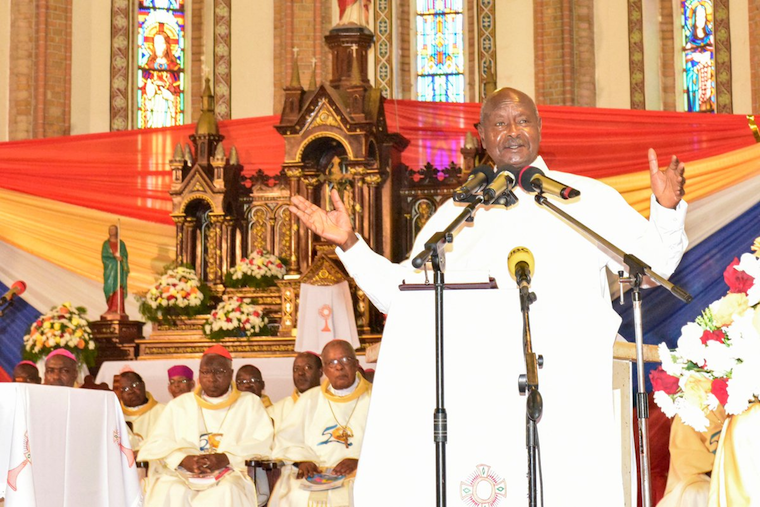 Museveni addressing the bishops at Rubaga

The organizers of the Symposium of the Episcopal Conference of Africa and Madagascar (SECAM) were on Sunday caught off guard by President Yoweri Museveni’s early arrival at Rubaga cathedral.

The president arrived at Rubaga at around 8:40am ahead of the 10:00am mass and more than an early early. There was nobody to receive him as he marched through the half-empty church quietly with a few bodyguards. A number of organizers were still setting up the church hall and testing equipment.

Journalists too never noticed him as many were still setting up their equipment in desired vantage points. Museveni's unusual early arrival was moments later noticed by Rev Fr Joseph Ruzindana, one of the day’s masters of ceremonies, who immediately alerted colleagues as well as the congregation.

Rev Ruzidana later related the surprise arrival of the president to the second coming of Jesus. Museveni is a perennial latecomer for nearly all events and functions in Uganda (sometimes as late as 8 hours).

“I think that’s how Jesus will come when nobody is expecting. He will come like a thief in the night, is wise that we stay prepared all the time,” Fr Ruzindana said, sending the president into laughter as he waved to the congregants.
Almost after twenty minutes, a few prelates led by the Kampala Archbishop Dr Cyprian Kizito Lwanga moved in to welcome the president before he stepped out of the church. Mass later started at 10:13am and Museveni requested to address the congregants before the start of mass.
In his address, Museveni challenged the church to engage parishioners in wealth creation so as to foster development and raise standards of living on the continent.
Museveni noted that without doubt, Africa is doing well spiritually than any other continent in the world, where, according to him, the flock and shepherds seem to have lost focus and allowed evils like homosexuality to penetrate the church.
"I’m very glad that spiritually Africa is doing much better than other continents. Other continents are in deep spiritual crisis and I don’t have to go to the details. When somebody can get to a situation where they can’t tell a difference between a man and a man, then you know there is a very serious situation there." said Museveni.
He added that although Africans have developed spiritually, the continent is still locked under formidable poverty which needs to be checked by efforts and forces from the political and religious arena. Museveni says that although Africa has a big mass of land and big population as compared to the United States of America, its productivity rate is too low as many people are stuck in subsistence farming over the years.
The president stressed that the poverty of the people on the continent hurts the government and the church in equal measure since it is difficult to preach to the poor. He says he always observed that even while offering to church, many still have nothing to offer to their God.

Over 300 Catholic bishops from Africa are in Uganda for the 18th Plenary Assembly and Golden Jubilee which will run up to July 29, under the theme; Church-Family of God in Africa, Celebrate Your Jubilee! Proclaim Jesus Christ Your Savior. Museveni bought all the robes to be worn by the over 300 participants.

According to Uganda Episcopal Conference, the plenary which will be held at Speke Resort Munyonyo will deliberate on how far the Church in Africa has come in its evangelizing mission.

SECAM was put in place out of the desire of the African Bishops who attended the Second Vatican Council (1962-1965), to establish a forum from which the Church in Africa could speak with one voice on matters pertaining to the local and the universal Church. The idea was concretized in July 1969, during the visit of Pope Paul VI to Uganda.

12
0 #11 Remase 2019-07-22 13:03
"The president stressed that the poverty of the people on the continent hurts the government and the church in equal measure since it is difficult to preach to the poor. He says he always observed that even while offering to church, many still have nothing to offer to their God."

Fellow Ugandans, if after 34 years rule of the most corrupt and violent individual, abject poverty still prevails in the entire nation, and "many still have nothing to offer to their God, who fault is it?

Sabalwanyi the mother of all corrupt bustards. It's safe to say that Bishop Lwanga was happy to see the most violent individual by surprise, after all, that what Sabalwanyi is good at, ambushing people!

Sabalwanyi gave Lwanga, who received death threats from a person with a western ascent, 500m and Lwanga is now happy like a bird in the air, and says, "Awaangale ai Sabalwanyi M7!"
Report to administrator
0 #12 karemere 2019-07-22 16:46
Quoting Wainainchi:

Hail Museveni Father of Africa and Uganda! ... Only the future generations will comprehend the scope of your caring and dedicated work for all the people if Uganda, Africa and beyond! Vebale munonga munonga Mzee

We understand and I like your euphemistic way of [SAFELY] saying the opposite.

However, those boots are already clean enough and your contribution to the same task might not make that much difference, if that is your objective intention.
Report to administrator
0 #13 Samson 2019-07-22 20:53
Hope they ushered him into the confession box :-) :-)
Report to administrator
+1 #14 Lysol 2019-07-22 20:55
A mere cheap staged photo -op for the media. Rubaga played a role in bringing Museveni to power.

One Nsubuga and the two old senile Okellos colluded to help Museveni capture power from Obote.

Museveni is a prank master, He used to dress as a woman in order to beat the roadblocks, back in the day. Nowadays he sometimes uses body-doubles to fool Ugandans. Not to mention his colonial hat and the safety vest under his oversized shirts.
Report to administrator
0 #15 rubangakene 2019-07-22 22:53
I wonder what the fuss is; anyway, going to church (and praying) is between the individual and God; why should others be involved.

Whether you go early or late, only God the Son and the Holy Spirit (THE TRINITY) will decide the outcome, not us mortals. BEWARE THE END IS NIGH!
Report to administrator
+1 #16 Wainanchi 2019-07-23 11:21
@My Response to all haters and saboteurs of Uganda--
Sorry thugs!

We agree to disagree! Your contribution to Uganda aside from hate speech and malice.You contributed to sabotage, killings, division, hate, mallice, cowardly killings, demonstratios!!

Dont we read everyday but everyday from you cowards and idiots calls for uprisings and divison of Uganda?

Are you not happy with anything good happening in Uganda?You are poisonous like poisonous snakes, biting deadly and killing progress of Uganda.

May God have mercy on your souls.Damn be and cast to Hell hating devils!!!
Report to administrator
-1 #17 Kirya 2019-07-23 15:29
M7 the thief dictator should stay away from our c I pray he goes to.hell for being useless and failing to go peacefully
Report to administrator
-2 #18 mehdi mountather 2019-07-23 16:12
Ebola viruses and theses natural disasters punishment of ALLAH to non-Muslims to convert to Islam and Muslims to apply the Quran to 100% in Africa on 23.7.2019 to prevent death earthquake more 6 tsunami floods lightning storms hailstones cyclone tornadoes fire heatwave Ebola virus and meteorites Boko Haram and Isis to lay down their weapons
Report to administrator
12