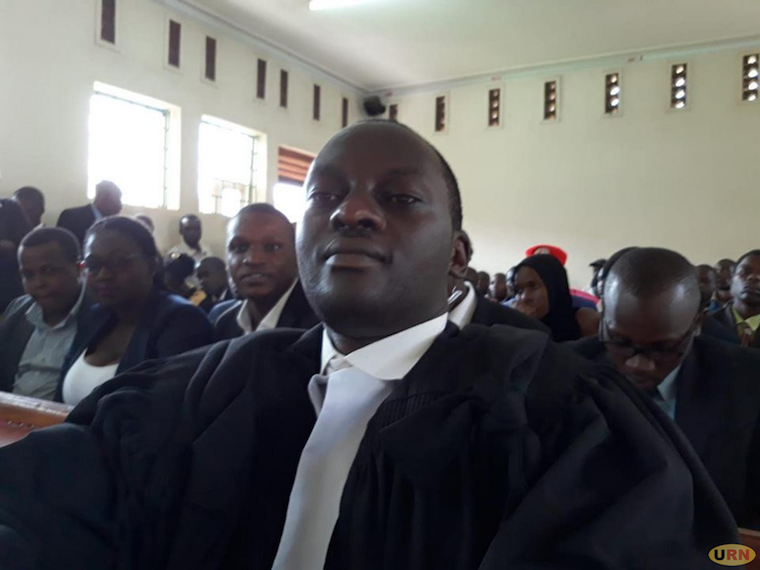 Uganda Law Society (ULS) a body charged with ensuring high levels of professionalism among lawyers, has asked him to ‘withdraw’ the posts.
Simon Peter Kinobe, the ULS president, says his attention has been drawn to a sustained social media campaign accusing and attacking the person of justice Murangira and the manner in, which he handled a land matter before him in Mubende.

The said posts are in respect to an on matter registered as miscellaneous cause number 11 of 2019 Ssematimba John and 23 others Vs Kaweesi George and others at Mubende High court.

“In the said posts, you expressly and by innuendo refer to the presiding judge; Justice Joseph Murangira as a “Mafia” a member of “the troublesome trio” and also attach multifarious photos of the learned judge clad in judicial robes. You accuse him of “mishandling the case”, playing games and being “in bed with tormentors” and “biased’’ among others,” Kinobe states in his July 17 letter to Kiiza.

According to Kinobe, advocates, by the virtue of their appointment are officials of the court and should espouse, protect and uphold the principle of fair hearing enshrined under Article 28 of the Constitution of Uganda, which requires that a person shouldn’t be condemned unheard.

“By using social media to attack a judicial officer, you violate this rule and deny the judge an opportunity to be heard,” Kinobe says. Adding that; “Comments in the media by an advocate in personal conduct are of a matter contrary to the advocates (professional) conduct regulations and in this particular case border criminality.”

Kinobe notes that there are alternative avenues to handle errant judges in case they are found to have bias and or unbecoming conduct. The avenues, according to Kinobe, include raising complaints through the principal judge, chief justice or the Judicial Service Commission, the body that is legally mandated to deal with errant officers.

In his July 18 response to Kinobe, Kiiza denies posting any innuendos, saying that he is a human rights lawyer who has advocated for it for a long time.

“Social media is not inconsistent with Article 28 of the 1995 Uganda Constitution. If it were so, you would certainly not have judicial officers with social media accounts,” Kiiza says.

Adding that; “Social media gives life and meaning to freedom. …I am sure that contrary to your suggestions, I committed no crime in using social media to give voice to the problems of the people of Mubende evicted from five villages.”

In his three-page response coloured with poetic language, Kiiza notes that while lawyers “must water the gardens of judicial independence”, that must not blind them into shielding themselves and the public from the necessity of a war on judicial impunity.

“A burning house of advocates. The greatest house of an advocate is freedom. More so, the freedom of one’s mouth. When padlocks, however disguised, hail from the person or the office of the ULS president, danger lurks,” Kiiza notes.

According to Kiiza, the ULS president did not, in his letter specify any rules he had violated, but seemed to move to silence him.

“I had hoped, that the weight of your office and the spirit of your letter would give voice, even in one word, to the plight, pain and puzzle of the thousands of evictees whose unfathomable pain and violation have left me with no choice but to ventilate it through my Facebook account besides other for a,” Kiiza states.

Adding that; “Are you similarly irked by people who praise judges on social media or it is those who criticize them on social media that rub you the wrong way? Social media hymns of praise for our judges must accommodate interludes of criticism. Love poems should be juxtaposed with freedom songs in our digital interactions with the bench.”

Earlier this month, the chief justice Bart Katureebe tasked justice Murangira to respond to allegations of bias leveled against him in a July 4 petition by more than 3000 people evicted from their homes in Mubende district.

Yes, we are fed up with people who laugh their hearts out after inflicting damage to poor people, then going their way with the booty.

I am sure this Simon Peter Kinobe man must have been rewarded to shut off "loud-speaking mouths" that spread facts to villagers and city dwellers.

Poor souls according to this Kinobe man should be treated with the utter most injustice for being poor and the rich looters promoted as dignified gangs.

Saying the truth by exposing the rot in the judiciary through social media is now causing these robbers great head-aches.

Why should this man get alarmed? Could he be sensing smoke in his own house?
Time will tell!
Report to administrator
+3 #2 Akot 2019-07-18 21:16
{Uganda Law Society (ULS) a body charged with ensuring high levels of professionalism among lawyers,}

So why is this body not saying a word about the state terror, abuse of human rights, oppression...Dr Nyanzi is put through day in day out, for just wanting to live FREELY in her country?

What kind of law does Uganda Law Society dehere to, whose rights/freedom...does it protect/defend?

It's so called Uganda court (justice) ensuring Ugandans who want to have a say in their country are locked up, right?

Has any one who insults D. Trump, been arrested, terrorised by US police & court?

And D. Trump is only trying to get a second & final 4 year term!

But Uganda court (justice) is ensuring Museveni rules for life with Ugandans just going along in silent obedience like, robots progrmmed by the conqueror Museveni!
Report to administrator
0 #3 WADADA roger 2019-07-20 22:53
Whereas i do not agree with Erons' approach of attacking the Judge on social media, for some of us who have appeared before Justice Murangira, it is hard to defend on any matter, i cant wait for the day he will retire
Report to administrator