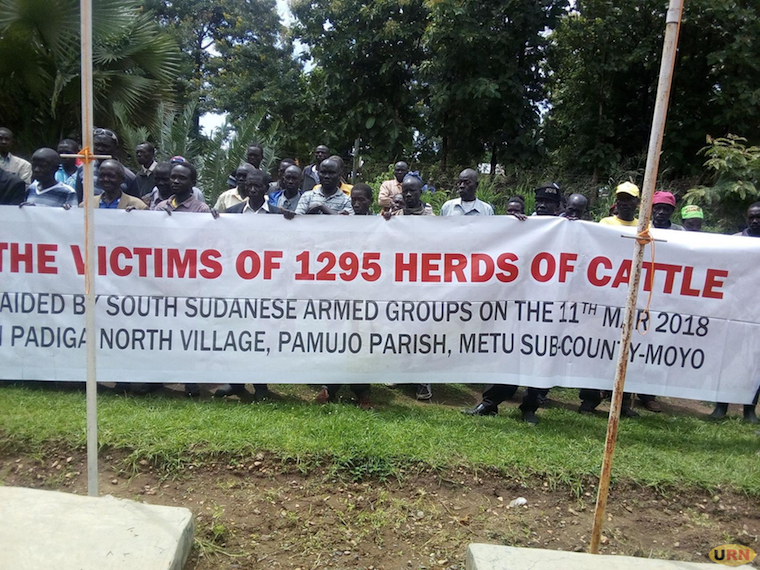 Residents of Metu sub-county, Moyo district whose livestock was raided by armed men from South Sudan in 2018, have stormed the office of Moyo RDC demanding audience with President Museveni.

On 11 March 2018, armed men raided 1,295 herds of cattle from Padiga North village of Metu sub-county. Last August, Museveni promised that his government will compensate the victims and later compel the government of South Sudan to refund the money to the Ugandan government.

However, it is now one year and four months and the compensation has not yet been effected. The farmers have lost patience and want to meet the president over the matter, since the animals were the source of revenue to pay school fees, medical care.

They argue that their children have dropped out of school because they are now unable to pay school fees. Gore Goffin, the deputy RDC pledged to lead representatives of the farmers to the president next week. The secretary for security Sam Asussi noted that plans to meet the president have failed for several times but prayed that this time it won’t fail.

Izakare Simone Opeli, the chairman of the association of the victims, says if the plan fails, then they will do anything so as to prompt government to act.

Well, it is more than 30 years since the Langi lost theirs and they have never been compensated. I ask: Why would you think that your case would be different?
Report to administrator
0 #2 Zaitun 2019-07-16 09:37
These people should not forget that, just like the Langi Mr Karemire is talking about, you should never forget that you are from a wrong district that does not matter much to our hero, the liberator.

If you came from districts that talk the same language like him, you Residents of Metu sub-county, Moyo district and Lango sub region would have been compensated.
Simply forget about compensation.
Report to administrator